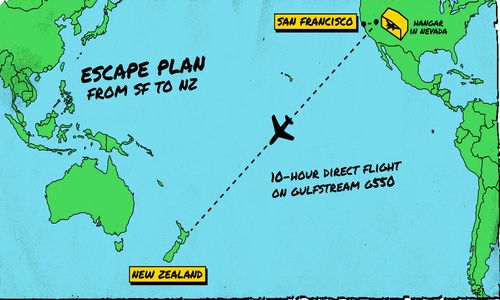 By Michael Snyder/Economic Collapse Blog September 12, 2018
Share this article:
While most of the general population has been lulled into a false sense of security, bankers and tech executives are spending millions upon millions of dollars to prepare for the collapse of society.  Do they know something that the rest of us do not?
Apparently talk of doomsday scenarios has become very popular at Silicon Valley dinner parties, and as you will see below, having a plan to escape to New Zealand appears to be a very popular "Plan B" among the tech elite.  Of course this is not just a west coast phenomenon.

Many bankers on the east coast have similar concerns and have also been developing contingency plans.  Ladies and gentlemen, they know what is coming and they are feverishly getting prepared for it.
In fact, J.P. Morgan Chase's head quant just publicly declared that the next financial crisis is going to result in "social unrest not seen in the U.S. in half a century".  The following comes from CNBC...
Sudden, severe stock sell-offs sparked by lightning-fast machines. Unprecedented actions by central banks to shore up asset prices. Social unrest not seen in the U.S. in half a century.
That's how J.P. Morgan Chase's head quant, Marko Kolanovic, envisions the next financial crisis. The forces that have transformed markets in the last decade, namely the rise of computerized trading and passive investing, are setting up conditions for potentially violent moves once the current bull market ends, according to a report from Kolanovic sent to the bank's clients on Tuesday.
His note is part of a 168-page mega-report, written for the 10th anniversary of the 2008 financial crisis, with perspectives from 48 of the bank's analysts and economists.
If you visit my website on a regular basis, you already know that I have been warning that rising levels of anger and frustration are rapidly eroding the thin veneer of civilization that we all take for granted on a daily basis.
Back in 1968, the Vietnam war was in full swing, a presidential election was approaching and two of the most prominent leaders in America had just been assassinated.  Chaos erupted in the streets as a result, and Kolanovic is absolutely convinced that we will see a similar eruption soon...
Kolanovic closes his report on an ominous note: "The next crisis is also likely to result in social tensions similar to those witnessed 50 years ago in 1968."

That year saw the peak of both the Vietnam War and anti-war movement and the assassinations of Martin Luther King Jr. and Sen. Robert F. Kennedy. Today, the internet and social media are helping to polarize groups, and events including the U.S. election and Brexit show tensions that will probably worsen in the next crisis, he said.
When society begins to come apart at the seams, many among the elite do not plan to stick around for the day of reckoning.
A Bloomberg article that was just published entitled "The Super Rich of Silicon Valley Have a Doomsday Escape Plan" has some amazing revelations.  According to the article, over the past two years seven "Silicon Valley entrepreneurs" have purchased survival bunkers from a company in Texas and shipped them to locations in New Zealand...
In recent months, two 150-ton survival bunkers journeyed by land and sea from a Texas warehouse to the shores of New Zealand, where they're buried 11 feet underground.
Seven Silicon Valley entrepreneurs have purchased bunkers from Rising S Co. and planted them in New Zealand in the past two years, said Gary Lynch, the manufacturer's general manager. At the first sign of an apocalypse -- nuclear war, a killer germ, a French Revolution-style uprising targeting the 1 percent -- the Californians plan to hop on a private jet and hunker down, he said.
It would be weird enough if one wealthy individual did this, but the count is now up to seven.
So why have they chosen New Zealand?
Well, it is because New Zealand doesn't have any enemies, English is spoken there, it is very stable, and it is very far away from everything else.
Plus, the country allows wealthy individuals "to essentially buy residency"...
The nation allows emigres to essentially buy residency through investor visas, and rich Americans have poured a fortune into the country, often by acquiring palatial estates.
Billionaire hedge-fund honcho Julian Robertson owns a lodge overlooking Lake Wakatipu in Queenstown, the South Island's luxury resort destination. Fidelity National Financial Inc. Chairman Bill Foley has a homestead in the Wairarapa region, north of Wellington, and Titanic director James Cameron bought a mansion nearby at Lake Pounui.

There has been a significant exodus of wealthy Americans to New Zealand in recent years, and once things start getting really bad there will be a steady stream of private jets taking off from locations in the U.S. and landing in that beautiful nation.
Of course not everyone plans to leave.  Luxury survival bunkers are also being constructed all over the heartland of America, but they aren't cheap.
For example, it was being reported that a "penthouse" inside the Survival Condo in Kansas was selling for more than four million dollars...
Another shelter for the ultra-wealthy is the Survival Condo in Kansas.
It was designed to withstand a nuclear blast or nature's worst, but is far cry from what you might expect an underground shelter to look like.
There is a cinema, a swimming pool with a water slide, a spa, a lounge, a gym and an indoor shooting range to keep occupants entertained.
But survival comes at a price.
Last year, it was reported that plush 3,600sq ft penthouses within the shelter - a former missile silo - were selling for $4.5m.
Needless to say, anyone outside of the top 1 percent is not going to make it into the Survival Condo.
And in order to keep the rest of us out, it has an armory that is "stocked with guns and ammo"...
Additionally, an armory stocked with guns and ammo is in place in case of an attack by non-members, and is also available for owners to practice.
The bunker is able to sustain its owners for up to five years, by raising tilapia in fish tanks and growing hydroponic vegetables under lamps.
The elite can see what so many of the rest of us can also see.
Our future looks very troubling, and it appears to be wise to get prepared for what is coming in advance.
Unfortunately, the rest of us don't have the money to buy a luxury survival bunker or to fly to New Zealand on a private jet.  Money may not be able to buy happiness, but it can buy a pretty good escape plan.