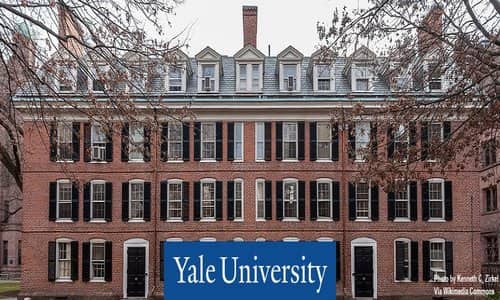 The freshman class at the New Haven, Connecticut-based Ivy League school numbers 1,578. More than half of all first-year students took part in a survey that gauged their opinions, interests, and goals, according to the Yale Daily News.
Of the 864 respondents, just 9 per cent said they viewed themselves as 'somewhat conservative' while 1 per cent said they were 'very conservative.' As for LGBTQ students, 'nearly 5 percent [of respondents] identify as gay and just over 9 percent as bisexual or transsexual. Three percent opted not to answer, and the remaining 8 percent identified as asexual, ace spectrum or questioning their sexual orientation.'
Those who can be categorized in the LGBTQ grouping even outnumbered prominent religious sects. Combined, there are more LGBTQ freshmen at Yale than there are Protestant students (16 per cent) or Catholics (15 per cent). In May, a Gallup poll showed that 4.5 per cent of Americans identified as LGBTQ in 2017.
God isn't very welcome at Yale these days, despite her prestigious (and very religious) origins--but most interesting is the fact that LGBTQ people are wildly over-represented at Yale. Less than 5% of Americans identify as LGBTQ, but a combined 14% of Yale students do.

Then there's the 8% who identified as asexual, "ace spectrum" (which is apparently the "grey area between asexuality and nonsexuality"--there really is a term for everything these days) or trans. "Questioning" is also very in vogue lately, and with so many options being presented, one can hardly blame people for being somewhat confused.
Much less surprising is the fact that three quarters of the students identified as liberal, with 30% saying that they are "very liberal." Three quarters of Yale's professors also described themselves as "very liberal," with less than 10% identifying as conservative. In the humanities, the number of professors identifying as liberal is higher than 90%, and even in STEM the faculty is over 60% liberal.
Yale's formal slogan is "Lux et veritas"--"Light and Truth." I hope for the handful of conservative students that the sentiment hasn't been completely rooted out in favor of rigid ideology.
Originally published at The Bridgehead - reposted with permission.