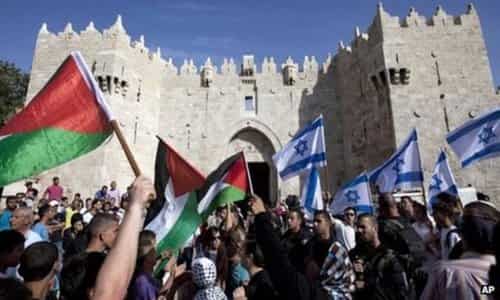 By Stephen M. Flatow/JNS.org April 14, 2016
Share this article:
Israelis of a certain age have a saying which translates from Hebrew as, "We've already seen that movie." It's the approximate equivalent of, "Fool me once, shame on you; fool me twice, shame on me."

It came to mind after seeing the most recent full-page ad in the New York Times that was sponsored by advocates of a Palestinian state. At the top was photo of Jimmy Carter, Menachem Begin, and Anwar Sadat, next to the headline, "Israel Made Peace With Egypt -- and Got Peace." That was followed by a photo of Bill Clinton, Yitzhak Rabin, and King Hussein, next to the words, "Israel Made Peace with Jordan -- and Got Peace."
Those two were followed by a third headline, "If Israel Makes Peace with the Palestinians, It Will Also Get Peace."
I wonder how many readers of the New York Times will realize why there was no photo next to that third headline.
There should have been a photo, of course. If the sponsors of the ad -- the S. Daniel Abraham Center for Middle East Peace -- had been honest, they would have displayed the photo of Bill Clinton, Yasser Arafat, and Yitzhak Rabin at the signing of the Oslo Accords on the White House lawn in September 1993.
But printing that photo would have undermined the ad's central message. The entire purpose of the ad was to blame Israel for the absence of peace. The ad sought to convince the public that Israel has it in its power to make peace or not. All Israel supposedly has to do is "make peace," and, voila, "It Will Get Peace."
Showing the photo from 1993 would remind the public that Israel already made peace with the Palestinians -- and it didn't get peace in return. To put it another way: acknowledging the historical record interferes with the campaign to pressure Israel into making even more concessions to the Palestinians.
It's also important to address the myth that Israel "got peace" as a result of its treaties with Egypt and Jordan. It didn't.
In the 1979 treaty with Egypt, Israel surrendered the entire Sinai Peninsula. It gave up a huge strategic buffer zone; and it gave up oil fields that supplied a significant portion of Israel's energy needs. In return, Egypt promised to educate its people to sincerely accept the idea of peace with the Jewish state.
But that's not what happened. What Israel received in exchange for the Sinai was a long extension of the cease-fire with Egypt that had been in place since the end of the 1973 Yom Kippur War. I am not revisiting the question of whether that was a good trade-off for Israel.
I am only pointing out that today, 37 years after the treaty, large numbers of Egyptians remain hostile to Israel. Note that when Egypt recently held democratic elections, the fanatically anti-Israel Muslim Brotherhood was voted into power. Fortunately, the generals who overthrew the Muslim Brotherhood have chosen to preserve the ongoing cease-fire with Israel. But that's a far cry from a genuine, deeply rooted peace.

Likewise, it wasn't the treaty with Jordan that "got peace." Israel has had a cease-fire on its border with Jordan since the end of the 1967 Six-Day War. King Hussein, and his son and successor King Abdullah, understand that Israel could crush them if they try to make war against the Jewish state.
So they have preferred to hold their fire. The 1994 treaty merely codified the existing situation on the ground. The Jordanian masses, however, have not been educated to embrace peace, which is why we periodically read about large numbers of Jordanian parliament members adopting extreme anti-Israel resolutions.
And that, by the way, is the same reason that the Oslo Accords did not produce peace with the Palestinians. Israel made all the concessions that it promised, and more. It withdrew from the areas in Judea and Samaria where 98 percent of the Palestinians live. It withdrew from all of Gaza. It stopped building new settlements in the territories back when Yitzhak Rabin was prime minister.
In exchange, the Palestinians promised peace. The Oslo Accords prohibit the Palestinian Authority (PA) from engaging in "hostile propaganda." But as we know, the PA engages in hostile propaganda every single day. Instead of educating Palestinian children for peace, it educates them -- and trains them -- for war against Israel.
The folks at the S. Daniel Abraham Center can't fool us. What they call "making peace" with the Palestinians now -- that is, giving them a state -- will not bring peace. How do we know? Because "making peace" with them in 1993 -- when Rabin permitted the creation of the PA regime, which is already close to being a de-facto state -- did not bring peace.
They can leave photos of Oslo out of a newspaper ad, but they can't change the historical record. We've already seen that movie.
Originally published at JNS.org - Reposted with permission