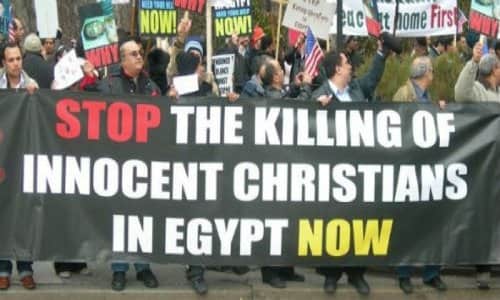 By Hany Ghoraba/Algemeiner.com October 11, 2018
Share this article:
Islamists and jihadists in Egypt have targeted the Egyptian Coptic Christian minority for decades with bombings and mob attacks on Coptic churches, businesses, and homes. Many are sanctioned by fatwas from radical clerics, Salafist preachers, and Muslim Brotherhood muftis.
The latest attack took place last month in Dimshaw, a village in southern Egypt's Minya governorate. A mob of nearly 1,000 Islamists and Muslim radicals attacked Christians who had gathered in a home to pray. Several homes reportedly were looted and set on fire.

The mob claimed that the Christians didn't have a license, and a rumor spread that they were on the verge of building a new church. A Minya court released 21 of the 25 people arrested in the attack.
Copts often take a passive approach to such crises. "Copts, by nature and by belief, are by far more accepting of death, fate, and all tragedies that befall them," said Egyptian writer and political analyst Azza Sedky. "When one of them dies, they believe he or she has gone to a 'better place.' Acceptance is key."
The 1956 Suez crisis generated xenophobia toward foreigners, driving many out of Egypt. The Muslim Brotherhood stepped up activities around that time and "began to play [its] tricks and the antagonism [against religious minorities] intensified, especially in rural areas," Sedky added.
Spreading rumors is a long-standing tactic for the Muslim Brotherhood. In 1947, for example, a Cairo police officer tried to stop an unlicensed Brotherhood political march. The protesters then spread a rumor that the officer tore a copy of the Koran, which triggered a riot in which he was killed. Brotherhood founder Hassan al-Banna blamed the slain police officer for not acting prudently.
A rumor spread by the Muslim Brotherhood in 1952 claimed that Copts in Suez were colluding with British occupation forces to kill Muslims. As a result, a mob stormed the city and burned several Copts alive, later throwing their bodies into a church that was then burned down. The "Suez Massacre" marked the beginning of a long series of assaults and killings of Copts based on rumors spread by the Brotherhood and other Islamists.

Recent rumors spread by Islamists claimed that Copts were gathering arms in churches to be exported to Israel.
Since the June 2013 Revolution, Egypt's Christians have been blamed for Brotherhood President Mohamed Morsi's ouster, with Islamist leaders vowing that Christians would pay a price. They carried through on those threats in August 2013, immediately after the Egyptian army wiped out the Brotherhood's Rabaa armed encampment. Islamists torched 66 Coptic owned buildings, including 49 churches.
Major attacks against Copts continued. A December 2016 bombing at Cairo's St. Mark Church during Sunday Mass killed 29 people and injured 48 others. A twin bombing four months later targeted a Palm Sunday service the St. Mark Church in Alexandria and St. George Church in the Nile Delta city of Tanta north of Cairo. At least 45 people were killed and 126 were injured.
President Abdel Fattah al-Sisi vowed to protect the Christian minority, but that message has not yet led to stricter enforcement of laws on assailants and radicals who incite violence.
A new church-building law aimed at helping Copts may actually create harm, said Mohamed Abu Hamed, the deputy head of the Egyptian Parliament's "Solidarity Committee," which is designated to introduce laws and recommendations for social justice. The law should have applied to all places of worship, he said, but covers only church construction.
The latest attack on Christians in Minya may indicate a return to a pattern of attacking Copts during prayer services. In July 2015, radicals attacked a house designated to the Copts as a church. Salafi radicals stoned those gathered, but fled when security forces arrived. They came back and threw Molotov cocktails at the gathered Copts.

For decades, local authorities approved "customary reconciliations" to resolve disputes, including those between Muslims and Christians. Community leaders, heads of families, tribal leaders, and local authority figures meet to try to resolve conflicts without going to court. But they don't always produce just outcomes, Abu Hamed said.
On a similar note, Coptic Bishop Macarius rejected all forms of unofficial reconciliation.
Conditions for Copts are improving despite these troubles, Sedky said, but "as with everything else, it will take generations to overcome an ingrained hatred that was left to flourish for years."
The current atmosphere is still ripe for the Muslim Brotherhood and Salafists to spew their poisonous ideologies, lies, and rumors, Abu Hamed said. He blames a tepid effort from Al Azhar -- Sunni Islam's most prestigious institution -- to reform religious curriculum; a significant Muslim Brotherhood and Salafi presence in key positions within state religious institutions; and Muslim Brotherhood control of mosques that spread hateful ideology despite a state ban.
Until reform happens, Egypt's Coptic population will remain threatened by violence from radical groups. Safety cannot be attained simply through security measures. Social measures, including educational and social reforms and the full application of the law, are required to create full equality for all Egyptians.
Originally published at Algemeiner.com - reposted with permission.