Demographics And Decisions: How Jews Vote And Why It Matters 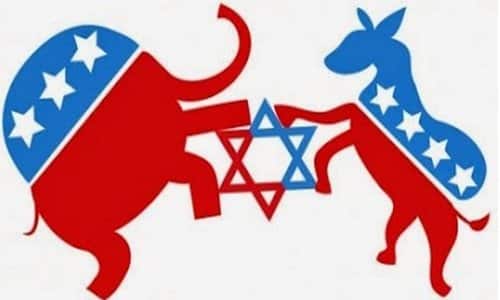 By Alina Dain Sharon/JNS.org April 19, 2016
Share this article:
When it comes to projecting the Jewish vote in 2016, understanding demographics might lend some semblance of sanity to an election that most observers would compare to a roller coaster ride.

HUC-JIR's Cohen, however, said that Israel is generally not a major factor in most Jews' voting decisions because "each political perspective sees its candidate as doing right by Israel." Nevertheless, "if we had a presidential candidate, either Democrat or Republican, who came out and said, 'I don't think Israel should exist,' I think that probably would determine a good portion of the Jewish vote," Sheskin said.
Saxe does see a possibility among some independent or moderate Jewish voters to choose to vote in a Republican primary over a Democratic one because they don't believe the candidates on the Democratic side are sufficiently supportive of Israel. But Saxe doesn't believe that Jews "have had to face that question" yet.
Looking ahead to the Jewish vote in the general election, despite Ted Cruz's staunch support for Israel, Cohen projected that "if it were a Cruz-Clinton competition, Cruz wouldn't win out. Clinton is the more natural choice for most American Jews."
When it comes to the fact that Sanders is Jewish, the demographic experts largely agree that his religion has little bearing on whether or not Jewish voters will cast their ballots for him.
Sanders's Jewish identity, said Sheskin, "seems to be predicated on the fact that his parents were persecuted and had to leave Poland...His Jewish identity might play a bit more of a role if he was active in the Jewish community in some way."
The Sanders campaign comes 16 years after Joe Lieberman, an Orthodox Jew, was the vice president on Al Gore's ticket, creating what Windmueller recalls as a huge amount of Jewish communal conversation and concern regarding whether the Gore-Lieberman campaign would lead to anti-Semitism and if Lieberman's presence on the ticket was a good or bad thing for American Jews. At the same time, Lieberman's active Jewish life created more "excitement" for Jews than the Sanders campaign, said Windmueller.
"There was a whole degree of excitement about the Lieberman presence on a national ticket. We don't see that happening...with Sanders," he said.
Sanders's religion could have theoretically been a selling point for Jewish voters, but "in some ways it makes his position on the Gaza war stand out even more starkly," Saxe said.
"I don't think [being Jewish] will necessarily help him, which is not to say that he won't get a large Jewish vote," he said.
Similarly, the experts agree that the fact that Donald Trump's daughter Ivanka Trump is a convert to Judaism isn't likely to motivate Jews to vote for her father, at least not any more than how Chelsea Clinton being married to a Jew would potentially convince Jewish voters to vote for her mother.
On the Republican side, the experts say it is much more difficult to determine how Jews feel about Donald Trump. In addition to his controversial statements on immigration, Muslims, and Mexico, which make him anathema to liberal voters, Trump initially said he intends to be "neutral" on the Israeli-Palestinian conflict. He later backtracked on that stance, saying he simply wants to appear neutral so that he can make a deal to settle the Israeli-Palestinian conflict.
"No one quite knows what Trump is or how to categorize him," Sheskin said. Despite Trump's recent speech to the AIPAC conference, which was perceived as strongly pro-Israel, Sheskin doesn't "see how Trump could do anything that's going to get him some reasonable percentage of the Jewish vote."
While Cruz is projected to face an uphill climb among Jewish voters in the general election due to his conservative positions on social issues, there are fewer indicators for how Jewish voters might feel about Kasich. In New York, where there are large communities of Orthodox and Russian Jews, "we're likely to see a very polarized [Jewish] electorate" in the state's April 19 primary, Cohen said, though Sheskin believes most New York Jews will ultimately vote Democrat and for Clinton in the primary and general elections.
Saxe said that because a relatively small percentage of the U.S. population participates in the political process, "we haven't had a pure test of what people really think," but rather only "a test of what the people who are most active or feel most strongly think."
Broadly speaking, many voters appear to feel torn about both parties' candidates, a sentiment that echoes in the Jewish electorate.
"I spoke to a couple of [independent Jewish] voters in northern California....and they are struggling," Windmueller said. "They don't particularly care for Hillary, they don't feel Bernie Sanders has much to offer because he's so idealistic...and they're really turned off by Trump and not comfortable with Cruz....I think you have a whole corps of Jewish voters, Republicans and some independents, and even maybe a few Democrats, who in a sense are holding out until they see what happens in Cleveland at the Republican convention in July."