Chaos In The Streets: Portland Civil Unrest A Sign Of What Is To Come? 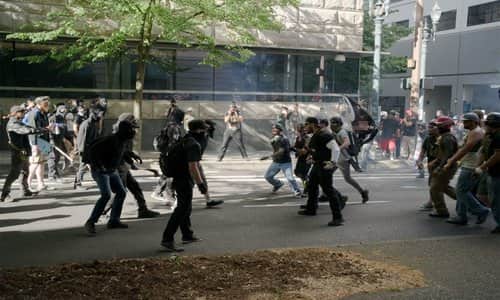 By Michael Snyder/Economic Collapse Blog October 17, 2018
Share this article:
Nobody should want to see Americans beating the daylights out of other Americans in our city streets, but it is starting to happen with alarming regularity.  Americans have become more radicalized politically than ever before, and there is certainly nothing wrong with being passionate about what you believe, but way too often these very strong feelings are leading to outbursts of anger and violence.
The "left" hates the "right" and the "right" hates the "left", and the mainstream media and many of our leading politicians are having a good old time stirring the pot on a continual basis.  It is almost as if they actually want violence to happen.  For a very long time, many of us have been warning that civil unrest is coming to America, and now it is here.

If you doubt this, please consider what just went down in Portland on Saturday night...
A demonstration billed as a march for "law and order" in the streets of Portland descended into chaos as rival political factions broke into bloody brawls downtown Saturday night.
Members of the right-wing group Patriot Prayer and their black-clad adversaries, known as antifa, used bear spray, bare fists and batons to thrash each other outside Kelly's Olympian, a popular bar on Southwest Washington Street.
The melee, which lasted more than a minute, ended when riot cops rushed in and fired pepper balls at the street fighters.
In addition to the weapons mentioned above, it has now been confirmed that some of the combatants were armed with "firearms" and "knives"...
Video shows the first punches being thrown which quickly escalated into chaos that spilled out into the streets. Police now confirm that the demonstrators used pepper spray and were armed with 'hard-knuckled gloves, firearms, batons and knives.'
In less than a minute, anti-riot police appeared on the scene using foam bullets to control the crowd.
It seems inevitable that as these brawls continue to become even more bloody that people are going to start getting shot and stabbed at these things.
But neither side seems inclined to back down.  In particular, Antifa continues to become even more defiant.  Prior to the brawl on Saturday, members of Antifa were filmed burning an American flag...
And it isn't just on the west coast where this kind of thing is happening.
Over the weekend, members of Antifa brutally vandalized the Metropolitan Republican Club in New York City...
Antifa just handed the Republican Party yet another messaging victory that will only help propel the simmering backlash to leftist "mob rule".
In a gesture that was intended to put New York City Republicans "on notice," members of Antifa vandalized the Metropolitan Republican Club building, located on NYC's Upper East Side, breaking windows and doors and defacing the facade with "anarchist" symbols, according to the New York Times.

In a note left with the vandalism suggested that the damage to the left at the scene, the vandals declared that the attack was related to  a planned appearance by Gavin McInnes, the founder of the Proud Boys, a conservative group that has publicly battled with leftist groups at rallies, protests and demonstrations across the US.
Responsible leaders from both political parties should be seeking to defuse the growing violence, but instead many of them are constantly fueling it with their hateful words.
For example, just consider what former Attorney General Eric Holder just said...
As Democrats approach midterms - and more importantly the 2020 US election, former Attorney General Eric Holder had some advice during a Sunday campaign event in Georgia.
"Michelle [Obama] always says 'When they go low, we go high.' No. No. When they go low, we kick them."
And Hillary Clinton herself just stated that it is not possible to "be civil" with the Republican Party...
Holder isn't the only leading Democrat calling for aggressive action against conservatives. In a Tuesday interview, Hillary Clinton rejected the idea that Democrats should be "civil" with Republicans in the age of Donald Trump.
"You cannot be civil with a political party that wants to destroy what you stand for, what you care about," said Clinton.
So it shouldn't be a surprise when their followers commit acts of violence, because they are simply responding to the rhetoric of their leaders.
But there are a couple of recent incidents that went way, way, way over the line.
Kaitlin Bennett, the director of Liberty Hangout and the founder of Campus Carry Now, recently had one unhinged leftist protester threaten to throw her to the ground and rape her...
Last night at the Trump rally in PA, a liberal protester touched me against my consent and said he'd throw me on the ground and rape me. Feminists around him, who say we're supposed to believe women, defended him and denied it happened. This is what the left has come to. #MeToo

And in a letter that was sent to her anonymously, a female Republican candidate for the Vermont state legislature was warned that "we will rape you for days"...
Deserae Morin, Republican candidate for Vermont state legislature, has posted a picture of a death threat letter that she apparently received. The letter says "****, we are hunting you. My comrades will kill you and the Constitution. First, we will rape you for days. You will scream and know that agonizing horror. No equal rights for republicans. Socialism is here. Open season for Republican death in Vermont. Fear our revolution. AA. It's time"
In what kind of world would something like that ever be okay?
And why isn't the mainstream media reporting on these threats?
If liberal candidates were being threatened like this, it would make headline news all over the nation.  But most of you that are reading this article probably had not even heard about both of those threats yet.
This is the kind of societal chaos that I was warning about five years ago, and now it has become reality.  It has taken an extended period of time for America to reach such an advanced stage of decay, and things are likely to only get worse from here on out.
But the elite don't like the American people to be told the truth, and they are censoring us on a scale that would have once been unimaginable.
Just last week, there was another mass censoring of independent voices on Facebook and Twitter...
Mark Zuckerberg just shut down 559 pages and 251 accounts -- which include tons of massive independent media sites with millions of followers run by Americans -- a few weeks out from the midterms.
Jack Dorsey followed it up by banning many of the same independent news sites and the journalists who ran them on Twitter.
The pages included The Free Thought Project, Press For Truth, Anti-Media, Counter Current News, Right Wing News, Noisy Room, Gun Laws Don't Work, Allen West Republic, Reverb Press, Nation in Distress, Clash Daily, Voluntaryist Veterans and many more.
Is it just a coincidence that all of this censorship is happening just before the midterm elections?
Of course not.
We are in a battle for the heart and soul of America, and the flow of information is one of the most critical aspects of that battle.
There is a reason why our founders attempted to protect freedom of speech in the Constitution.  Without the ability to speak freely, tyrants can thrive, and that is why the left is so determined to shut all of us up.