The Rising Threat Of A Global Pandemic 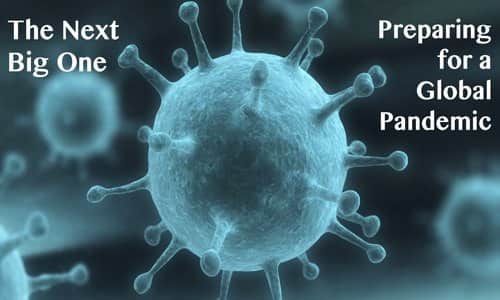 By Britt Gillette/EndTimesBibleProphecy October 18, 2018
Share this article:
One hundred years ago, the world struggled against a relentless enemy - H1N1, also known as the Spanish Flu. Rising from the trenches of World War I, it spread to every corner of the globe in 1918 and 1919 - even remote Pacific islands. What made it especially deadly is more than half its victims were healthy adults between the ages of 20 and 40. The virus turned their healthy immune systems against them.
They died terrible, gruesome deaths. And when the global pandemic finally came to an end, it had taken more lives than the Great War itself. Estimates say between 50 and 100 million people died - about 3% to 6 % of the world population.

Since then, we've avoided a similar outbreak. We've faced scares from bird flu, swine flu, Ebola, and other diseases, but we've avoided a global pandemic. Some of this is because of what we've done. We have better knowledge of how viruses and bacteria spread. We know how to quarantine areas, disinfect treatment centers, and provide more effective medical care.
But the number one reason we've avoided a global plague is luck. That's right. Since 1918, we've been just plain lucky. And unless we develop a cure for infectious disease, our luck will soon run out.
World Travel
One reason our luck will run out is our love for international travel. Crossing borders today is more common than it was a century ago. Past generations didn't travel like we do. Most lived their whole lives within a short distance of where they were born. International travel was extremely rare. But today? Today, anyone can fly from one side of the earth to the other in less than a day. And many do just that.
According to World Bank data, since 1970 alone, the number of airline passengers carried has increased more than 12-fold from 310 million passenger flights to 3.98 billion. Even people who don't travel the globe often commute or vacation over long distances. All this travel makes the spread of disease much more likely.
Containing an outbreak is nearly impossible in today's world, where borders are fluid and commerce moves at light speed. Throw in a new generation of viruses and bacteria, and our world of open borders is more vulnerable to a pandemic than ever before.
The Threat of Mutating Viruses
Since the 1918 pandemic, our knowledge of the flu has vastly increased. We have vaccines. We have plans and procedures for responding to outbreaks. We have antiviral drugs for treatment. But vaccines aren't perfect. We make them based on what flu strains we think will strike in any given year. Because of this, their effectiveness wildly varies. The flu is constantly adapting, and new strains can jump from animals to humans. Because of this constant change, it's impossible to develop a single vaccine to stop the flu.

Further complicating matters, some strains can easily move from one infected person to another. For example, the 1918 Spanish Flu infected one-third of the people on the planet. Fortunately, it only killed around one in ten people. Imagine if it had been one in three? Or one in two?
Tens of millions more would have died. Each year that passes without a global pandemic is a huge blessing. Nevertheless, we forget how vulnerable we are. For instance, think about this - last winter, more than 80,000 Americans died from the flu. This wasn't a global pandemic, just a normal flu season. Yet it killed twice as many Americans as auto accidents.
The Threat of "Super" Bacteria
While the threat of a devastating and contagious virus has always loomed large, an equally serious threat has emerged in recent years - "super bacteria." Ironically, this threat is the result of decades of successfully fighting bacterial infections with antibiotics. Doctors have overprescribed antibiotics, and patients haven't always taken them correctly.
Over time, these antibiotics have killed weaker bacteria, leaving resistant bacteria to multiply. This has led the World Health Organization to label antibiotic resistance a "fundamental threat" to humanity.
Government agencies and other organizations have banded together to fight and contain the threat. But failure to solve the problem could lead to a nightmare scenario where antibiotic-resistant bacteria become commonplace and impossible to treat. If so, the new "post-antibiotic era" will see patients die from once easily treated infections. Think it can't happen? In some cases, we're already there.
Antibiotic-resistant bacteria already infect 2,000,000 Americans and kill more than 23,000 each year. In August, a deadly super bacteria called the "New Delhi" bacteria infected hundreds of people in Poland. Resistant to all known antibiotics, it can quickly lead to sepsis and death. In April, the U.S. Center for Disease Control and Prevention warned that "nightmare bacteria" with the power to resist antibiotics are appearing all across the United States.

According to a 2016 Wellcome Trust report titled "Evidence for Action on Antimicrobial Resistance," the spread of antibiotic-resistant bacteria "threatens a return to the pre-antibiotic era of untreatable infections." The report estimates the number of annual deaths from antibiotic resistance is 700,000 worldwide, and the number could rise to 10,000,000 by the year 2050. Make no mistake. This is a global problem. With each passing day, the threat of a global pandemic continues to rise. In fact, unless a solution is developed soon, one is inevitable.
What the Bible Says
None of this should come as a surprise. When His followers asked Jesus about the signs of His coming, He told them what to look for. Among those signs, He mentioned "pestilence" (Luke 21:11). So what is pestilence?
Merriam-Webster defines it as "a contagious or infectious epidemic disease that is virulent and devastating." Jesus said pestilence and other signs will appear like "birth pains" (Matthew 24:8), meaning they will increase in frequency and intensity in the time leading up to His return.
So as the end approaches, we should expect infectious disease outbreaks to occur more frequently, impact more people, and be more deadly. But all is not lost. When these things happen, you can be confident time is running short. Jesus is coming. And when He does, He will usher in a new world where there's no more death or crying or sorrow or pain (Revelation 21:4). Amen, Lord Jesus - come!
Britt Gillette is author of the ebook Coming to Jesus as well as the books Signs of the Second Coming and Racing Toward Armageddon.