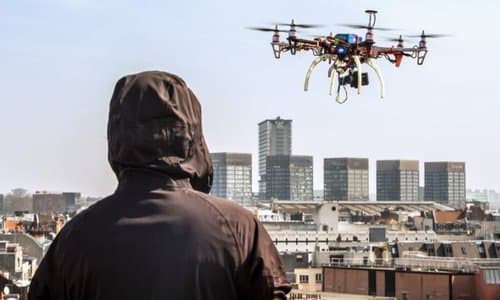 By PNW Staff October 29, 2018
Share this article:
The use of weaponized drones by lone individuals and small groups--some acting as proxies of nation-states--is no longer just a concern for the future, but very much for the present.
The Department of Homeland Security and the FBI identified have declared unmanned aerial systems, or drones, as one of the greatest national security threats to America -- rating it as severe a concern as cybersecurity hacks, critical infrastructure attacks, and terrorism.

Civilian drones pose a "steadily escalating threat," as the devices are likely to be used by terrorists, criminal groups or drug cartels to carry out attacks in the U.S., FBI Director Christopher Wray told a Senate committee.
"Terrorist groups could easily export their battlefield experiences to use weaponized" drones, Wray said in written testimony for a hearing of the Senate Homeland Security and Governmental Affairs Committee.
Wray's comments, his most forceful to date on the threat from drones, come as U.S. law enforcement and homeland security agencies have just obtained legal authority to monitor drone communications and to disable them in extreme cases as a result of such concerns.
"The FBI assesses that, given their retail availability, lack of verified identification requirement to procure, general ease of use, and prior use overseas," drones will be used in an attack in the U.S. including "a mass gathering," Wray said.
One nightmare scenario universally feared by law enforcement and security services is the use of a small drone to deliver chemical or biological agents in an attack. It is already well-established that al-Qaeda and other terrorist groups have long sought to engineer a spectacular attack in the West using weapons of mass destruction.

The possibility that drones could be used to disperse deadly agents or viruses over public gatherings is a harrowing prospect. Even if a drone attack fails to result in large numbers of fatalities, the attempt could still achieve an attacker's goal of perpetuating the psychological dimension of terrorism.
Sporting events are undoubtedly one of the top targets for a drone attack. Upwards of 100,000 people attend college football games. Open air stadiums used for football, soccer, baseball and other events such as music concerts are more vulnerable than domed stadiums as the crowd, players and coaches are not protected by a shield above.
Drones are already used by transnational criminal syndicates and drug cartels. On the U.S.-Mexico border, drones are being used to spy on federal law enforcement operations and smuggle contraband through the sky. The first drug smuggling incident via drone was documented in Nov. 2015. Now, it's a daily occurrence in some regions of the southern border, but it's rarely reported because they are unable to seize the devices. Arrests are rare.

Many countries are now using armed drones in combat--Nigeria, Pakistan, and Turkey have recently done so--the chances for sophisticated drone technology getting into the wrong hands increases exponentially. If a terrorist group can steal or purchase a drone from a rogue state or corrupt military or intelligence officials, then they could rely on the myriad online videos posted that essentially demonstrate how these unmanned systems could be used to conduct an attack.
In Syria, the Islamic State has successfully used drones to conduct surveillance and reconnaissance in addition to carrying out offensive actions like dropping a grenade on an adversary's military base.
Hezbollah has already tried to use a drone to infiltrate Israeli airspace and Israel is one of the nations leading the charge in anti-drone technology.
The most well known drone attack was the recent attempt to assassinate Venezuelan President Nicolas Maduro. That the drones were able to get so close to a world leader at a public outdoor event in Caracas, Venezuela, speaks to how easy drones are to use--and how difficult they are to defend against.
Fighting back back can be difficult, since any item falling out of the sky -- especially one with spinning wings -- can pose a threat to the public. That means it's not always possible to simply shoot them down.
As the threat of drone terroism increases so does anti-drone technology.  Here is one great example of new technologies that can make a difference: