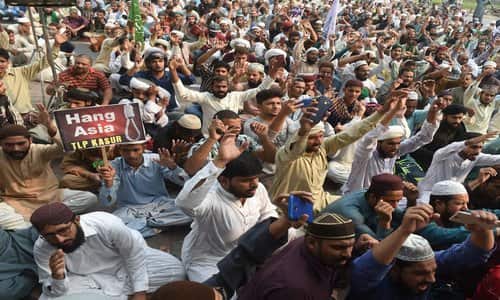 By John Stonestreet/Breakpoint.org November 02, 2018
Share this article:
The prayers of Christians around the world for Asia Bibi have been answered, but many more are needed for her and for all Pakistani Christians.
On Wednesday, the Supreme Court of Pakistan overturned the conviction of Asia Bibi, a Christian woman sentenced to death for blasphemy.

The acquittal was not only a just ruling, it was an incredibly courageous act by the Court. And still, we should be clear that until Asia Bibi is out of the country, she's not out of danger. Even more, all Pakistani Christians face a very volatile and dangerous situation there now.
Thousands of Islamist protesters have brought Pakistan to a standstill, burning rickshaws, cars and lorries to protest against the acquittal and are calling for the death of her and her family. Schools and businesses have been closed to avoid the the violent crowds.
Here's the background: In June, 2009, Asia got into a dispute with her Muslim neighbors. Her family was the only Christian family in that village, and her neighbors had objected to a non-Muslim using the same cup to fetch water from a well as they did.
A few days later, her neighbors successfully petitioned the local cleric to charge her with insulting the prophet Muhammad. What she actually said was "I'm not going to convert [to Islam]. I believe in my religion and in Jesus Christ, who died on the cross for the sins of mankind. What did your Prophet Mohammad ever do to save mankind?"

She was then arrested and imprisoned while awaiting trial. Sixteen months later, a judge found her guilty and sentenced her to death.
Then matters got even worse.
When she appealed her case to the highest court in her native Punjab province, the provincial governor there, Salman Taseer predicted that she would be pardoned by Pakistan's president.
A few weeks later, Taseer was killed by his own bodyguard.
He wasn't the only politician to be killed for defending Bibi. Two months later, Shahbaz Bhatti, a member of the cabinet, was also assassinated for speaking up on her behalf.
Bibi was to spend nearly eight more years in jail waiting to learn if she would be executed. In the meantime, her family was forced to flee their village because they too were threatened with death.
Finally, on Wednesday, Pakistan's Supreme Court rendered a 56-page opinion citing, among other things, the Quran, Islamic scholars and Shakespeare. In it, the Court overturned the guilty verdict and ordered her release.
Besides finding that Bibi's accusers had not proved her guilt, they pointed out something long obvious: Blasphemy allegations are often used in Pakistan to settle scores and provide a pretext for vigilantism.
About Asia Bibi the Court said, "She appears to be a person, in the words of Shakespeare's King Lear, 'more sinned against than sinning.'"
While she may have finally prevailed in Court, neither she nor her family are safe. As soon as the verdict was announced, protesters took to the streets and "merchants shuttered their shops." The leaders of one Islamic group called for the judges to be killed, which as we have seen, isn't an idle threat.

Another cleric said, "Now the decisions will be taken on roads and not in court," adding that anyone who kills Bibi "will be a hero to Muslims."
Bibi and her family are expected to leave Pakistan as soon as possible. But that's easier said than done. While "several Western countries have offered her family asylum . . . they are understood to be moving cautiously." Apparently, they're too afraid of "a backlash against them . . . if they are seen as interfering in the case."
Embassies take days and sometimes months to process asylum requests and given the amount of animosity against Bibi, she may not have that much time before someone attempts to kill her.
Given the perfidious history of the Pakistani military and police, which are both riddled with Islamist radicals, only a fool would expect them to adequately protect Asia Bibi and her family. That's why we need to pray today for God's protection on this family.
We also need to pray for the estimated 2.5 million Pakistani Christians. Being a Christian in Pakistan is dangerous even in less-charged circumstances. Today, however, Muslim radicals have an excuse to satisfy their bloodlust for Bibi by turning on the Christian community.
Yes, we should rejoice at Asia Bibi's legal vindication. But her case must remind us just how much our brothers and sisters need our prays and our advocacy on their behalf.
Originally published at Breakpoint.org - reposted with permission.