Christian Converts From Islam Live In Fear For Their Lives 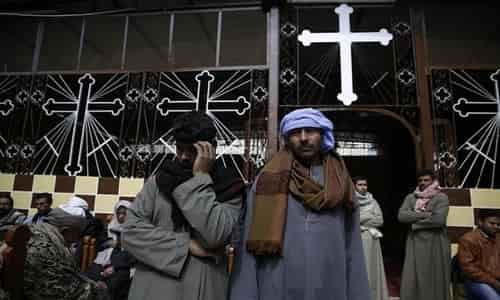 By Tom Olago April 21, 2016
Share this article:
Muslims who convert to any other faith are considered apostate, to have betrayed Islam and could face a punishment of death.

Robert Spencer for  Jihad Watch recently examined some of the challenges these "apostates" are facing around the world. Spencer noted that the death penalty for apostasy is part of Islamic law according to all the schools of Islamic jurisprudence, despite those who argue the non-violent nature of Islam.
This position was reportedly affirmed by Sheikh Yusuf al-Qaradawi, said to be the most renowned and prominent Muslim cleric in the world. Qaradawi also once famously said: "If they had gotten rid of the apostasy punishment, Islam wouldn't exist today."
Spencers research showed that Italy and the U.K are, ironically, two of the nations where the majority Christian populations are threatened and disrespected by Muslim groups.
He further stated that even in Italy some Muslims believe these laws apply. He made reference to a recent Breitbart.com article which reported that over a thousand converts to Christianity from Islam currently live in Italy, but hide their conversions for fear of retaliation from the Muslim community against themselves and their families.
One such example is a 55-year-old Egyptian chemical engineer who said that the decisive element in his conversion came from seeing Christians with "a humanity more complete than mine" and wanting to find what they had found.
Still, he openly expresses his frustration with having to hide his newfound faith. "I cannot openly practice my Christian faith. I am afraid that some fanatical Muslim may do harm not only to me, but especially to relatives who remained in Egypt."
"How is it," he asks, "that Italians who convert to Islam can go on TV and talk about it, but instead I have to hide to avoid retaliation?"
Spencer further noted that in Islamic countries, conversion to another faith always implies serious consequences. The crime of apostasy is punishable in different ways, from "civil death" (job loss, the denial of education of children and certain rights, breakdown of family ties), to prison sentences or the death penalty.
"Despite all this, the phenomenon of Muslims who become Christians, thanks to satellite television and the web, is increasingly popular," said Father Samir Khalil Samir, an Islamic scholar.
Nor is Italy alone in the experience of converts from Islam living in fear in the West. In 2014, a Christian group launched a national network of safe houses in Britain for converts from Islam who were facing ostracism or violent reprisals for "apostatizing."
Sadly, indications are that both the government and Churches are not doing enough either to support the victims or to deter and contain their attackers.
In one U.K. example described by Spencer in November 2015, Nissar Hussain, 49, suffered a shattered knee cap and broken hand when he was attacked outside his home in Bradford, West Yorkshire in what police were treating as a religious hate crime.
The father-of-six was battered 13 times, and was repeatedly punched and kicked by hooded thugs with a pickaxe in an attack he claims was sparked by his move from Islam to Christianity.
Hussain also claimed his family was driven away from a previous home by hardline Muslim residents, have had eggs thrown at their windows and even been attacked in the streets.
"Over the years our lives have been subjugated and stripped of any dignity. Our lives have been jeopardized and subjugated, we have been forced to live under a climate of fear, this is not England," he said.

In Islamic countries, the fears are predictably even worse. Walid Shoebat for shoebat.com reported in late 2015 the Egyptian case of a 22-year old Muslim named "Marwa A. E" who was divorced by her Muslim husband four years ago.
She later fell in love with her neighbor - a young Coptic Christian man. She then converts to Christianity, marries her Christian love and moves with him to hide in a distant village in Tamia. They had two children and she was two months pregnant.
Marwa's location was later accidentally discovered by her daughter who she had given birth to from her previous Muslim husband. The daughter then decided to snitch on her mother to her mother's uncle and brother.
They then kidnapped Marwa in order to keep her in tribal custody until she recanted her Christian faith, as was the Islamic custom there. Marwa was instead later beheaded by her Muslim relatives.
Yemen has also caused problems for former converts from Islam to Christianity. According to a Morning Star News account published in November 2015, two Christians in Yemen, both converts from Islam, were reportedly ambushed and killed because of their faith, according to sources close to the victims.
Both men were openly confessing Christ. A Yemeni friend of the second Christian said the convert was involved in evangelism, though he tried to keep his activities low key.
The friend said the second convert's family likely felt publicly shamed by his decision to follow Christ. Family influence in Yemen cannot be overstated, he said. The family structure in Yemen and in much of the Middle East works to enforce societal norms, especially adherence to Islam.
A source close to the Christian who was slain first said a member of AQAP (Al Qaeda) was responsible.
Only1way.net last November republished a familiar scenario, this time from Nigeria. Raphael, the son of a Muslim Imam converts to Christianity and is soon after threatened with death.
The extremist Muslim Boko Haram group had already warmed up for the killing act by burning his stores, father's house, offices, and thereafter killed one of his cousins. Their chilling message has been unmistakably clear: reconvert to Islam, or die.
One Islamic imam in Uganda sought to implement this very edict. According to Jihad Watch, the Morning Star News recently reported from Nairobi, quoting from sources that an imam who threatened a convert from Islam in eastern Uganda had been arrested in connection with the killing of the 28-year-old Christian.
Laurence Maiso's body was found at his house, his head in a pool of blood, on Jan. 27 at around 5 p.m. in Uganda's Budaka District. Four days earlier, Imam Kamulali Hussein had met him and his wife on a local road.
According to Maiso's wife, the imam told him, "You have refused to join us. Do you know that Allah does not want us to have a kafir [infidel] neighbor? And you should know that Allah is about to send to you the Angel of Death in your house. Please prepare to meet him at any time."
Hussein departed. Four days later, Maiso's wife went to see a friend in a nearby village. She returned to find her husband dead on the floor.
The tales of woe against Christians and especially former Muslims who chose to convert to Christianity seem endless. Much prayer and support from fellow believers worldwide will be required to help sustain them through the challenges of staying faithful to the Gospel of Jesus Christ - even unto death.
As Jesus Himself warned: "Brother will betray brother to death, and a father his child; and children will rise up against parents and cause them to be put to death. You will be hated by all because of My name, but it is the one who has endured to the end who will be saved." (Matthew 10:21-22).