Transgender Activists Move From Libraries To Schools To Push Agenda 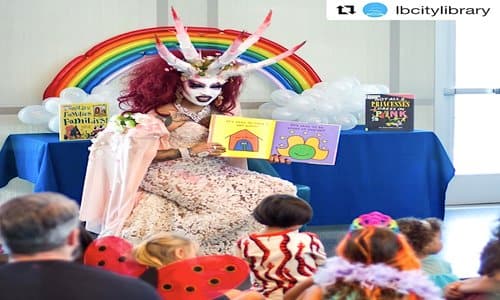 By PNW Staff November 13, 2018
Share this article:
Drag Queen Story Hour, the controversial program in which a cast of drag queens read books on homosexuality and non-conformity with gender norms to young children is now seeing some of it's activists gain influence in school settings as well.
Drag Queen Story Hour, which began in San Francisco in 2015, has been replicated in libraries and bookstores across the country including Los Angeles, San Francisco, Chicago, New Orleans, Wichita and New York.

The website that helps co-ordinate these readings explains that it aims to "capture the imagination and play of the gender fluidity of childhood and gives kids glamorous, positive, and unabashedly queer role models."
In other words, they are trying to subvert traditional notions of gender at an age when children are most vulnerable and are still trying to understand these roles.
Now transgender activists are looking to push their message into the public school system, some under the guise of career reading day or special talent events.  Some parents of students at a middle school in Colorado are expressing objection after learning that a man who works as a "drag queen" was among the entities who spoke to students at a recent literacy day.
A man who goes by the stage name "Jessica L'Whor," appeared at Rocky Top Middle School recently, visiting various classrooms to talk about his profession and to read a book about acceptance. The man changed his name to "Ms. Jessica" for the occasion as he believed his full stage name would not be appropriate for children.
He was one of over 100 visitors to the school for "Rocky Top Reads," which included first responders, professional athletes, journalists, politicians, clergymen and others. The purpose of the event was to spotlight "the connection between literacy and a successful career."
However, as parents were not notified that "Ms. Jessica" would be speaking to children at the school, some were disturbed when they found out that their son or daughter was introduced to a drag queen that day. The male entertainer did not perform for students, but did appear in full drag, wearing a dress, wig and makeup.
"This person is an adult entertainer and is talking to 12-year-old students about something that's adult in nature," parent Heather Rogers complained.
Mrs. Rogers can be thankful she was not part of School District 4  in Manhattan which recently held its so-called Learning Expo.

Much of the event was devoted to showcasing the standard talents of elementary-aged children, talents ranging from piano playing and gymnastics to magic tricks and singing.
The two hundred gathered families were entertained by the innocent displays of their children until the President of the Public School 96 Parent Association, Frankie Quinones, closed the event with a highly explicit drag queen performance that had dozens of parents rushing to usher their children out.
Children as young as five years old were subjected to views of the middle-aged Quinones gyrating on stage in drag, showing his g-string underwear and moving his tongue suggestively to mimic perverted sexual behaviors.
Raquel Morales, a parent attending with her fifth-grade son, told reporters that "People were horrified. It looked like a nightclub performance. I've been asking for an apology from the district for the last week, and they've been ignoring it."
Quinones' act, which he delivered in a black dress, was kept as a "special surprise performance" until the end of the show. Responding to the lip-synched song from Iris Chacón, one upset parent said, "I left the show the minute he started sticking his tongue out.
I had my children with me and I wasn't going to allow them to see that." School officials have not, according to an Education Department statement, faced disciplinary actions over the act that even their spokesperson now admits was "inappropriate".
Many parents have begun to push back at both schools and libraries. Last month, concerned parents and community activists protested outside a library in Columbus, Georgia, that hosted such an event.
Similarly, a group called Common Sense Campaign Tea Party called on concerned parents to protest at a public library in Mobile, Alabama, that is also hosting the event.
Last year, parents in Long Beach, California, also spoke out against the Drag Queen Story Hour when the Michelle Obama Neighborhood Library hosted a drag queen named Xochi Mochi who dressed as a five-horned demon to read to children.
Evangelical leader Franklin Graham is lauding the efforts of parents and concerned community activists who are protesting efforts to bring the Drag Queen Story Hour to their local libraries.
"Men in full drag reading books to kids at the public library? No wonder people are protesting!," Graham said in a Facebook post.
However, a Houston federal judge dismissed a temporary restraining order request led by conservative Christians against a local public library's "Drag Queen Story Hour" events.

A number of Christians joined the lawsuit against Houston Mayor Sylvester Turner and Rhea Lawson, head of the city's library system, arguing that the events featuring drag queens reading to children are a promotion of secular religion, and violate the freedom of religion clause in the Constitution.
What kind of impact will these activists have on influencing the next generation?  They will no doubt add numbers to the already brainwashed millennial mindset on the issue.
A poll was recently done to measure young millennials attitudes to the issue.  The question posed to young Americans: should the government "remove children from homes where the parents refuse to provide resources for gender transition?"
The question didn't include an age restriction for the kids. You may want to sit down for this:
Fully 18 percent of the 1,402 respondents answered yes; another 27 percent said they were unsure. Among female respondents, a majority stated that children should either be removed from the home (21 percent), or they were unsure (33 percent).
A whopping 60 percent of Clinton voters felt the same way; just seven percent of those who voted for Trump said yes, and 15 percent said they were unsure.
Among self-described liberals, 47 percent said they were either in favor of government removal.