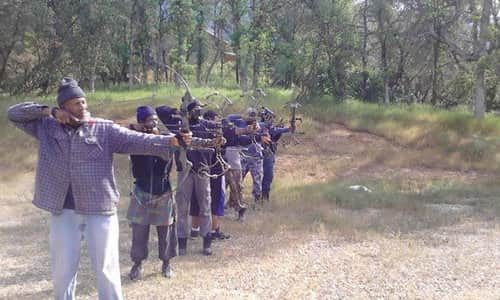 By Clarion Project  November 15, 2018
Share this article:
Clarion Intelligence Network has learned that a radical and militant Islamist group is operating a commune in California.
The Miraj compound, located in Dunlap, California, is home to a group of radical Islamists connected to the extremist Black nationalist Muslim group Al-Ummah (The Community).
The compound attracts a steady stream of affiliated individuals and families who camp on the compound's property. Many who visit the compound -- for retreats or year-round stays -- are convicted felons released from prison and who converted to Islam in prison.

The group has many similarities to Jamaat ul-Fuqra (Community of the Impoverished), a radical Islamist group in the U.S. aligned with the Pakistani radical cleric Sheikh Muhiyudden Ali Shah Gilani.
Gilani has been linked to the 2001 beheading of Wall Street Journal reporter Daniel Pearl. (Fuqra also goes by the name of Muslims of America.)
In addition to similarities in ideology, members at the Miraj compound as well as the Fuqra compounds are flogged for committing a crime. Members and guests of both groups practice shooting with weapons, however at Miraj, bows and arrows are often used (versus guns) so neighbors remain unaware of their military exercises.
The Miraj compound is much more advanced than any of the Fuqra compounds. It is evident that a significant amount of money flows through this camp, which allows the group to have a lake,  gardens, herds of lambs and goats, and n on-site butcher shop where members skin, cut and sell the animals for halal meat. Members of the compound live off the land and "off the grid."
They call for other black Muslims to do the same.
Al-Ummah and all its followers, including visitors to the compound, are anti-white and opposed to the American (as well as Israeli) government. They believe buying property and segregation from whites will bring America to its knees.
Who is Al-Ummah?
Historically, Al-Ummah preached jihad and war against the U.S. government, however after Al-Ummah's leader in Detroit, Luqman Abdullah, was killed in 2009 in a shootout with the FBI (in a raid busting a theft ring), the group toned down their statements about jihad in public.
Yet the group still publicly preaches against the American government.
Al-Ummah's spiritual leader is Jamil Abdullah Al-Amin, formerly known as H. Rap Brown, a well-known black civil rights activist in the 1960s. Al-Amin  is currently serving a life sentence for the shooting and killing two law enforcement officers in Georgia in 2000.
Al-Amin has instructed the men in charge of the Al-Ummah communities to teach his particular interpretation of the Quran to children. Boys and girls in the communities study separately.

Who is behind the Miraj compound?
The leader and owner of the Miraj compound is Na'il Karim, who lives on the compound along with his wife and daughter(s). Karim does most of the building at Miraj.
Karim pledged 100% allegiance to Al-Amim and also to Abdullah before he was killed. Karim is also friends with Zaid Shakir, co-founder of Zaytuna College. Shakir has called for sharia law for America.
Karim regularly invites Nation of Islam members from Chicago to the compound. They are welcome to stay all year round. Al-Ummah also has a relationship with Louis Farrakhan, leader of the Nation of Islam, as well as ties to a Sufi group in Chicago that resembles a Shiite sect called "The 12ers." This sect supports Iran's Supreme Leader Ayatollah Khomeini and his cohorts.
Karim's sister Anissa is affiliated with Fuqra.
Al-Ummah - How It Started
In the '60s and '70s in America, there was a large movement called the Darul Islam Movement which began in Brooklyn, New York and was run by a number of older, black Americans. The leaders of the group were Yahya Abdul Kareem, Atiq Abdus-Shahid and Hussain Abdalla.
As the group grew, they expanded with affiliates in other locations in New York as well as in Philadelphia, Michigan, Georgia and Washington, D.C. The movement was looking for new ways to practice Islam. In 1979, a Pakistani sheikh named Mubarak Ali Gilani (the head of Fuqra, mentioned above) came to their mosque, Yaseen Masjid, in Brooklyn and started preaching a new form of Islam in America called Sufi Islam, which was full of mystical stories and odd beliefs.
The three leaders of the Darul movement gravitated towards Gilani, which caused a huge divide between the movement's leaders and its common folk. Fighting and arguments broke out between friends and even family members within the movement.

A monumental meeting took place in Brooklyn, and those who decided to leave the Darul movement became followers of the new cleric, thus beginning the reign of Sheikh Gilani and his movement Jamaat ul-Fuqra. Atiq Abdus-Shahid went on to become the most senior member of Fuqra until his death in December of 2017.
Due to influence of Gilani, Yaseen Masjid disbanded in the '80s.
The remnant of the Darul Islam Movement regrouped and Jamil Al-Amin (H. Rap Brown) grabbed hold of the leadership position, using his fame from the 1960s as a political leader of the black civil rights movement to gain popularity.
Al-Amin named his newly-formed group Al-Ummah (The Community). He sent dedicated followers to the poorest neighborhoods in America, including inner-city neighborhoods in Detroit, Philadelphia and NY to establish communities. In these neighborhoods, the leaders of these communities converted ex-cons, drug dealers and even drug users to Islam. This was how Al-Ummah's inner city conclaves began.
Al-Ummah's Detroit community and its affiliate mosque, Masjidul Haqq, was run by Imam Luqman Abdullah. The small mosque still exists.
The Philadelphia community was and is still run by Imam Asim Abdur Rashid, who established a mosque called Masjid Mujahideen. A member of the community attacked and shot a Philadelphia police officer in 2017 in the name of ISIS.
Al-Ummah's communities in the inner cities are run in a manner similar to big businesses - with a "CEO," then regional and district managers down to local "store owners."
The Miraj community is the only known Al-Ummah compound in the U.S.
Al-Ummah and other similar groups generally fly under the radar of federal authorities. This is primarily because federal agencies don't have the personnel or budget to keep their eye on all of them.
In addition, some agents within the FBI don't see these groups as a threat but only as mouthpieces, similar to their perception of Louis Farrakhan. However, some agents believe the black Muslim community, especially in the Philadelphia area, are more of a threat than Arab supporters of ISIS or Al-Qaeda.
The greater Philadelphia area houses more than 70 mosques with an estimated Muslim population of 175,000, including surrounding counties.
Originally published at Clarion Project - reposted with permission.