Israel's Kindness Is Repaid With Terror 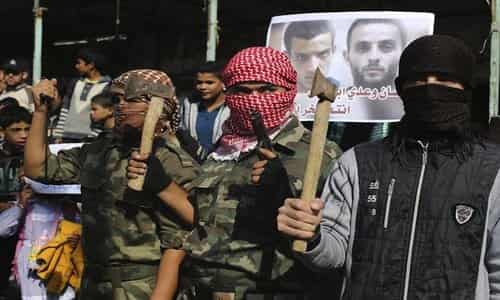 By Stephen Flatow/JNS.org November 28, 2018
Share this article:
Israel gives the Palestinian Arabs self-rule in large sections of Judea-Samaria, and they use it to promote terrorism.
Israel releases Palestinian terrorists from prison as a gesture, and the newly freed prisoners resume engaging in terrorism.
Israel permits Arab residents of Gaza--enemy territory--special permits so that they can receive medical care in Israeli hospitals or to carry out business transactions in Israel, and they use those privileges to assist terror cells.

Anybody notice a pattern here?
This week's discovery of a huge Hamas terrorist network in the Palestinian territories is chock full of disturbing lessons.
Let's start with the very fact that such a network, directed by the Hamas regime in Gaza, has been operating with near impunity throughout the areas controlled by the Palestinian Authority.
The P.A. has one of the largest per-capita security forces in the world. Yet for some reason, they never noticed all these Hamas terrorists running around. It was the Israeli security services, the Shin Bet, which once again had to carry out the anti-terror operations that the P.A. refuses to undertake.
"Hundreds" of members of the terror network were captured, the Israeli news media reported this week. Not 20, not 80, but hundreds! They were planning "to conduct large-scale bombing attacks," and had been instructed by their commanders to "select crowded sites as targets for the attacks ... trains, buses, hotels and restaurants."
Sites were scouted in order to kill as many Jews as possible. Pittsburgh-style.
The discovery of the network began with the arrest of a Hamas terrorist named Osweis Rajoub from the village of Dura, near Hebron. Dura has been under the complete control of the P.A. since 1995. It also has more than its share of residents who have been involved in terror incidents.

Rajoub spilled the beans to his Shin Bet interrogators. The Shin Bet has been criticized by various left-wing groups over the years for supposedly being too rough when questioning murderers and would-be murderers. I don't know what tactics they used to get Rajoub to talk, but I'm sure glad they did what had to be done.
Think about how many lives they saved. Think of all the parents who will not be mourning the murder of their children, wives who will not be widows, and all the children who will not be orphans because the Shin Bet interrogators did their job.
As a result of Rajoub talking, "hundreds of young Palestinians, both men and women, who had been recruited by Hamas," were arrested, according to the news reports. That's right, women, too. In Palestinian society, women are silenced, abused and treated as second-class citizens in almost every respect--except in the ranks of the terrorists. If they're willing to murder Jews, Palestinian women can finally enjoy gender equality.
How were messages carried from the Hamas leadership in Gaza to its terrorists in the P.A. areas? In two ways, the Shin Bet discovered: "by Palestinians traveling from the coastal enclave to hospitals in Israel" and by "Gazan businessmen with permits allowing them to travel to the West Bank."
One of these couriers of death was 53-year-old Na'ama Mikdad, a mother of nine from Gaza "who had been given a travel permit to accompany her sister who had cancer and received medical treatment in Israel." How nice of Israel to do that. In fact, the Israelis gave her the permit even though they knew she and her sister are the nieces of a Hamas military commander, Muhammad Abu Kuwaik.

How did Mrs. Mikdad repay Israel's kindness? She traveled to P.A.-controlled Bethlehem, where she met with the terrorist Rajoub and handed him "trousers into which a cloth strip had been sewn on which instructions ... had been written." He had already been passed a phone to be used in planning the attacks.
"With the phone and the instructions on how to use it, Rajoub began working with an explosives expert to create the bombs needed for the attacks," the Shin Bet revealed. He also recruited two assistants from another P.A.-ruled village, Yatir.
Mrs. Mikdad also brought messages from the Hamas leadership to a terrorist in the P.A. capital city of Ramallah, named Fouad Dar Khalil. He had previously spent 14 years in prison for "taking part in a shooting attack on an Israeli car," as the Shin Bet put it. Clearly, he was released much too soon. And receiving his freedom evidently did not inspire him to give up his old terrorist ways. On the contrary.
Israel wants to be a nice guy. I get that. But I wonder how long the Palestinians will continue to repay Israel's niceness with terrorism before it finally becomes obvious that in rough parts of the world like the Middle East, nice guys finish last--or, all too often, don't finish at all.
Originally published at JNS.org - reposted with permission.