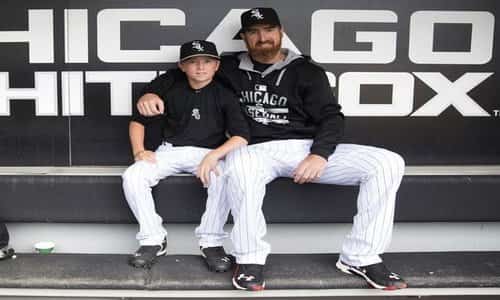 By John Stonestreet/Breakpoint.org April 26, 2016
Share this article:
In March, Major League baseball player Adam LaRoche shocked the sports world. LaRoche, a 12-year veteran who averaged more than 20 home runs a year and won many awards for his defensive skills at first base, unexpectedly retired.

By doing so, he walked away from $13 million--the amount left on the final year of a two-year contract with the Chicago White Sox.
Even more shocking than leaving $13 million on the table was the reason he did so: The White Sox had informed LaRoche that his 14-year-old son, Drake, could no longer accompany him in the club house every day.
If you can't imagine walking away from that kind of money for that kind of reason, you're not alone.
But then again, a lot of what LaRoche does is peculiar, and I mean that in the best possible way.
It's fair to say that most of those who commented on his decision, which in the age of social media means practically everyone with access to the Internet, were critical of LaRoche's decision to put his ideas about being a good father ahead of his team and his teammates.
Not that it matters to LaRoche. He told ABC news that "I have zero regrets." While he admitted to being angry with the White Sox at first, he added that their actions made his decision to retire easier. As he put it, "I don't want to be defined by this game. I know there's a lot more to life."
Well, this understanding that there's a lot more to life is why Tim Keown of ESPN wrote in his profile of LaRoche, "You need to forget everything you think you know about professional athletes. Adam LaRoche is different."
Part of the difference, as LaRoche's comments suggest, is that he's not consumed by the sport, despite being the son of one major leaguer and the brother of another. He has other interests, chief among them his Christian faith and his family. It's why Drake, who attends regular school in the off-season and is home-schooled in the spring quarter, accompanied his dad to the ballpark every day.
It's why, when LaRoche played for the Washington Nationals and the Chicago White Sox, he and other teammates sponsored "Faith Days" in 2014 and 2015.
And most of all, it's why LaRoche and Milwaukee Brewers pitcher Blaine Boyer spent ten days last November working undercover in Southeast Asian brothels trying to rescue underage sex slaves.
Yes, you heard me right. LaRoche and Boyer, working with a group called Exodus Road and at great personal risk, used a hidden camera to identify trafficked girls--known only by a number pinned to their bikinis--and also their bosses.

As Boyer told Keown, "Something huge happened there for us . . . Adam and I truly believe God brought us there and said, 'This is what I have for you boys.'" On the flight home LaRoche turned to Boyer and said, "What are we doing? We're going back to play a game for the next eight months?"
Upon his return from Asia, LaRoche was haunted by what he had seen and by the fact that it was going on while he lay safely in his bed.
Keown writes of LaRoche's "nearly cinematic level of nonconformity" to people's expectations of what an athlete should be. But a better description would be "peculiar." Peculiar in the biblical sense of being "a peculiar people." The Greek word translated "peculiar" means "costly" and "treasured," but because our treasure is found in different places than the rest of the world, Christian are to be "peculiar" in the more typical sense of being "different," maybe even considered "weird."
LaRoche's confidence to be peculiar, even at the cost of $13 million, comes from the fact that there's a lot more to life than the world would have us believe, but that God is waiting to show to us--maybe through a peculiar ball player.