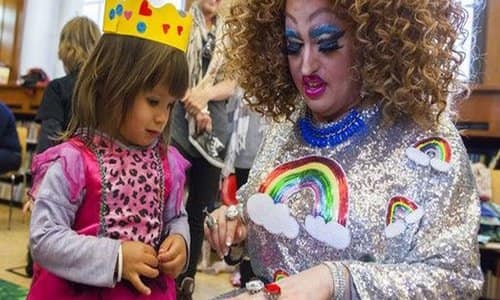 By Jonathon Van Maren/Bridgehead.ca December 18, 2018
Share this article:
Back in July, I wrote about the phenomenon of "Drag Queen Story Time" at public libraries across North America, where drag queens are brought in to read stories to groups of small children.
In response, bloggers at the Huffington Post, Gay Star News, and BlogTO wrote columns calling me "intolerant," which is at this point so boring it hardly bears mentioning.
One of the key points I was making--a point which was ignored--is that increasingly, LGBT activists are being invited into children's spaces to introduce children to their ideology.

It isn't just public libraries and the public school system, either. As it turns out, drag queens are also showing up at daycare centres to read stories--at the invitation of daycare providers, and apparently with the permission of parents. The CBC sent a journalist over to a Montreal daycare to deliver a glowing report of the proceedings:
When Barbada -- who is more than six feet tall without her heels on -- arrived at Over The Rainbow daycare in NDG this week, the children were fascinated by her appearance...The Montreal drag queen brought her big pink hair, big earrings, colourful dresses and warm smile to the daycare for its very first drag queen storytime earlier this week.
Barbada, who has been doing storytime events for young children at the Grande Bibliothèque for about a year, read the children stories in French and English, including Coat of Many Colors by Dolly Parton, about a girl who is poor and gets teased about her coat. After storytime, Barbada and the children discussed the messages in the stories: not judging people based on their clothing or their appearance, and the importance of showing each other respect.

Sébastien Potvin, the man behind the Barbada persona, is well aware of critics who say it's inappropriate for a drag queen to read stories to children. "People who've seen drag queens in bars probably think that all drag queens are the same," Potvin said. "Of course, in bars jokes can be vulgar, it's for adults... but we can adapt to any crowd."
When daycare owner Wendy Gyetvay spotted a video online of a drag queen in the United States reading a story to young children, she immediately imagined creating a similar experience for children at her daycare...Initially, when Gyetvay shared the video that inspired her storytelling event, it sparked a heated debate on her personal Facebook page.
The negative comments were few but forceful and Gyetvay says they just strengthened her resolve to move forward. First, she consulted all the parents of the children at her daycare and there were no objections, she said. In fact, it was a parent who put her in touch with Barbada...
At the same time, a staff member posted a photo of Barbada on social media and within minutes a parent from a different daycare responded, wanting to know how to organize a drag queen storytime.
Gyetvay was hoping to create a chain reaction. "If I can do it, perhaps another daycare will think about doing it and so on," she said. "Then it's going to further tell me this was the right decision."

It has always been important to be careful, but in todays' culture it is essential that parents be extremely diligent about where they send their children. Community spaces that were once family-friendly have now been colonized by LGBT activists who insist that drag queens are family-friendly fare, and children's storybooks about transgenderism frequently populate the shelves of public libraries.
Our cultural common ground has caved in, and the chasm between parents who still hold to basic, simple truths of biological gender and those who believe children should be taught that gender is subjective or fluid has widened enormously in just a few short years.
Originally published at The Bridgehead - reposted with permission.