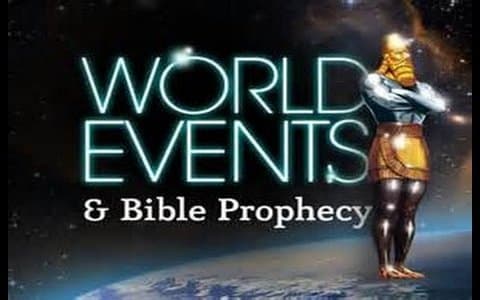 By Jan Markell/Olive Tree Views January 03, 2019
Share this article:
Almost one-third of the Bible relates to eschatology or Bible prophecy. I think we can conclude that a lot of what is happening today foreshadows "things to come."
Here are my observations on activities that relate to Bible prophecy in 2018. I am just discerning the times, not engaging in newspaper exegesis. I encourage everyone to be like the sons of Issachar in I Chronicles 12, who understood the times.
Some of the predicted signs will manifest in the Church Age. Most are Tribulation events that are casting a giant shadow today.

1. Nationalism is Scorned and Globalism is Celebrated
Globalism took center stage in 2018, so much so that President Donald Trump stuck it to the globalists by once against stating that he is a nationalist.
Additionally, Europe is reeling. The yellow-jacket rioters are stirring up trouble thanks to the globalists as they move from country to country, destabilizing Europe. Europe almost needs a savior.  France's Emmanuel Macron keeps making astounding one-world statements, including wanting to offer Israel a peace plan.  If the Antichrist is to come out of Europe, that continent is preparing the way for him.
The globalists will recover as they will get their "paradise" during the 7-year Tribulation. This year they even enlisted entertainer Celine Dion to seduce children with New World Order children's clothing.  They are desperate. Donald Trump is the disrupter-in-chief. Disrupter of the New World Order.
2. Israel Celebrates Her 70th Anniversary and America Moves Her Embassy to Jerusalem
In Matthew 24:34 Jesus gives a prophecy  that the generation living during predicted events  will not pass away until the events occur. Israel became a nation in 1948. Psalm 90 says a generation is 70 years.  The Bible refers to the Tribulation as the "70th Week of Daniel."
Israel's re-birth is a reminder that God keeps His promises.  Donald Trump kept a promise and moved the U.S. Embassy in Tel Aviv to Jerusalem on her 70th anniversary.
The dry bones came to life in May of 1948 and the country celebrated it's 70th anniversary last May. This is the miracle of all time. They stood up on their feet a great army and in 2018 were declared the eighth strongest nation in the world!
3. In 2018 "Birth-Pangs" Became Apocalyptic
Throughout the year, we watched heart-wrenching photos and videos of unprecedented disasters that are just a foretaste of what will happen in the Tribulation or the "Time of Jacob's Trouble."  Many commentators called these global disasters "apocalyptic" or "of biblical proportion."

4.  U.S. Troops Pull Out of Syria
In late-December President Trump stated that he will pull all U.S. troops out of Syria. While opinions vary and Christians and Kurds will be further slaughtered by evil forces, this opens a pathway from Iran to Israel. Iran now has a perfect land bridge to Israel. Russia, Turkey, Sudan, Libya, "and many nations", will join in this attack.
This action could further cause Israel to strike Damascus and fulfill the Isaiah 17:1 prophecy.
5. The Decline of the Character of Mankind; A Depraved Mentality (Romans 1); Lovers of Self (II Timothy 3); Godlessness, Immorality and Lawlessness Abound - A Return to the Days of Noah
In 2018 we watched:
• Massive voter fraud
• Supreme Court nominee Brett Kavanaugh is falsely accused in the name of politics
• Witches curse Kavanaugh and President Trump in public ceremonies
• Literal demonic hatred expressed towards Christians and Conservatives
• Clergy bless abortion clinics
• Drag queens appear everywhere and heavily at children's events and one seminary in St. Paul, MN
• Child drag queen performer "Desmond the Amazing" is declared by some to be the "the future of America."
#6. The Tragic Rise of Evil
The Bible says that in the last days "evil will wax worse and worse." (II Tim. 3:13)  This year we have seen paganism and witchcraft soar as Christianity declined and Millennials said they did not need God.
More than 60% of Americans embrace some kind of "New Age" belief.
It is now cool thanks, in part, to Hollywood, to believe in things that are dangerous. This is a foreshadowing of the sorceries of the Tribulation.
There is a growing love of evil while good is denounced (Isaiah 5:20).
The perpetrator of mass shootings such as the incident in Florida last February, state they heard voices telling them to perpetrate such acts.
And the Arch of Palmyra that was a part of the Temple of Baal appeared in Washington, D.C. in September.

#7.  Shocking Escalation of Apostasy and Mocking of Bible Prophecy
Just when you think apostasy and false teaching can't get any worse, it does! The New Apostolic Reformation is a global movement ravaging many churches with strange signs, wonders, and miracles that are not of God. Some of these folks celebrate their out-of-control "drunk-in-the-spirit" activity. Who could  have imagined that India's Kundalini spirit would actually enter the evangelical church?
Evangelical churches have almost all caved to social justice rather than sound preaching. People are left without a church as they appeal to church leadership, but in vain.
Many churches are willing to "refashion Christianity" thanks to Andy Stanley and "unhitch from the Old Testament" as he recommends.
Bible prophecy is almost impossible to find in a church pulpit. Even my annual conference is regularly hung as a "hysteria conference" where all such signs as those outlined here are proven year after year.
#8. Intrusive Technology Invades Homes and Paves the Way for the Antichrist
This year we have learned we are being watched or listened to 24/7 by big tech. This was also the year the tech companies admitted they had an agenda.
Artificial intelligence can far exceed the human brain and A.I. can make images of people that look human.
Facebook, Google, Apple, Microsoft, Twitter, and more, are the new "masters of the universe" but hate righteousness and will likely hand their tools over to the Antichrist.
#9. The Crisis in the Vatican
If the False Prophet comes out of Catholicism, we have seen its evil in the last year with one scandal after another. Pope Francis seems to look the other way, focusing on his own agenda.
The Pope is the ultimate globalist who could easily slide into the role of the sidekick to the Antichrist. Even some Catholics protest that their leader focuses only on global warming, immigration and Socialism.
This is the Catholic Church's worst crisis since the Reformation.
#10. Third Temple Talk Activity Accelerated
The Antichrist will allow the third Jewish Temple to be built in Jerusalem early in the Tribulation. Preparation for that Temple accelerated in 2018. The Temple Institute announced the birth of a perfect red heifer in Israel that could be used in Temple ceremonies.
The Sanhedrin hosted the dedication of the altar for the Third Temple with 70 nations invited to observe in December.
While the third Temple has nothing to do with believers, still such activity is again a Tribulation event that is casting a shadow today!
These are just ten issues that I felt needed to be highlighted as we begin a new year. Things are all falling into place.
Jesus is coming, perhaps today. God has allowed some to see the stage being set that indicates we are in the last hour. We are privileged to know what time it is. Many do not!
It is one-minute to Midnight. Headlines are a herald of His coming. Somebody get excited about that.
Originally published at Olive Tree Views - reposted with permission.