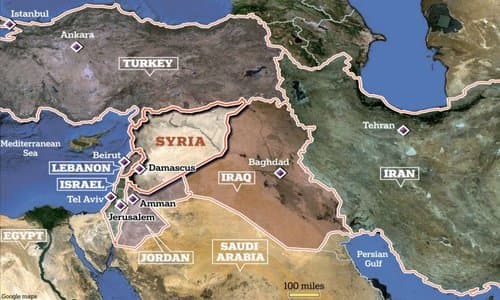 By Yaakov Lappin/JNS.org January 10, 2019
Share this article:
The era of chaos in the Middle East is drawing to a close, and a new phase, which contains its own set of dangers, is taking shape, a senior former intelligence official has told JNS.
Brig. Gen. (res.) Eli Ben Meir, former head of the Assessment Department at the Israel Defense Force's Military Intelligence Directorate, said the period of the "Arab Spring," marked by tectonic instability and dramatic changes, is drawing to a close.

The Arab Spring period featured large-scale civil wars, uprisings and the involvement of external elements in failed states, as old orders fell apart.
"In recent years ... one would get up in the morning and didn't know who controlled Syria, or what was happening in Iraq and Yemen," said Ben Meir, who headed the strategically vital Assessment Department in 2015 and at the start of 2016. "This was a period in which frameworks broke apart, and the old order underwent change. But from 2018 onwards, those states that were a mess have begun stabilizing. The assessment is that this will continue in the coming year."
This trend has proven true for Syria, Iraq and even Yemen, where the Saudis and Shi'ite Houthi rebels--warring enemies--are discussing ceasefires and seeking new understandings. States that were worried about "being next" to suffer instability due to a regional domino effect, like Jordan and Saudi Arabia, have remained stable, and now understand that they are not about to crumble, according to Ben Meir.
The time of popular uprisings, mass protests and social networks fueling regime change has vanished, he said. "Even in Syria, which experienced the biggest mess, [Syrian President Bashar] Assad has remained."
This does not mean that rebel assassins can't try to target Arab leaders in any country in the region--a threat that has always existed--but regime change won't happen through "the streets or Facebook, like the events of Tahrir Square [in Egypt]," affirmed Ben Meir.

A new period of explosiveness
The newfound stability in the Middle East is not, unfortunately, a guarantee for calm; rather, it most likely increases the potential for unpredictable conflict. In Syria, according to foreign reports, Israel conducted a large number of airstrikes against developing Iranian threats, taking advantage of the lack of a capable regime and military in that country.
"Now, however, the state and military are slowly coming back to Syria. A sovereign state has military capabilities. It can retaliate or go to war. It didn't do those things when it was busy defending itself," said Ben Meir.
Israel took advantage of the lack of a centralized Syrian regime to take preventative action, but it remains unclear how much longer it can do this without sparking an inter-state conflict.
In addition, the new order taking shape in the region includes the Shi'ite Iranian-Hezbollah axis. This axis remains highly active in Syria, and is attempting to gain dangerous accomplishments, like the deployment of precision missiles and the building weapons factories, Ben Meir assessed.
The new order taking shape is prone to "disruption and influence," he said, "whether it is [Israel's], the U.S., Russia or because of the influence of events."
In the Gaza Strip, he noted, fundamental problems that could lead to conflict have not been solved. The Strip remains locked in an economic crisis, and Hamas could end up going to war if its cash flow runs out.
Referring to the arrival of Qatari suitcases filled with assistance money, Ben Meir noted that "when those $15 million run out, either another suitcase with 15 million arrives, or we will face rockets. In principle, we gained time, but we have not solved the problem."

Disrupting the enemy's build-up of force
On Dec. 11, the recently appointed Military Intelligence Directorate chief, Maj. Gen. Tamir Hyman, offered his assessment to the Knesset's Foreign Affairs and Defense Committee. While many of his comments were classified, the Knesset publicized some of them, including his view that the current period is one of "disruption, influence and [a new order] taking shape." It is an opportunity "to act in all sectors," as part of Israel's campaign to interfere with enemy force build-up processes.
Hyman noted that in Lebanon, Hezbollah possesses an arsenal of unguided projectiles, and that as of now, it "lacks an industrial ability to convert [unguided rockets into accurate ones] and manufacture precision weaponry."
In Syria, the Assad regime is stabilizing, Hyman said, and the Shi'ite axis is entrenching itself. Israel, he warned, is committed to the goal of pushing Iran and Hezbollah away from the Golan Heights region.
Within Iran itself, a dispute has broken out within the leadership over the price of the Islamic Republic's attempt to entrench itself in Syria. "As a result, we recognize a trend in which [the Iranian entrenchment] has stopped, and it has been reduced on the ground by tens of percentages," said Hyman.
Yet the Dec. 25 airstrike in Syria, reportedly targeting a depot containing Iranian rockets, appears to be a sign that the Israeli-Iranian shadow war in Syria is far from over.
As the Middle East enters a new order, decision-makers across the region will likely be aware that the margin for miscalculation has become smaller.
Originally published at JNS.org - reposted with permission.