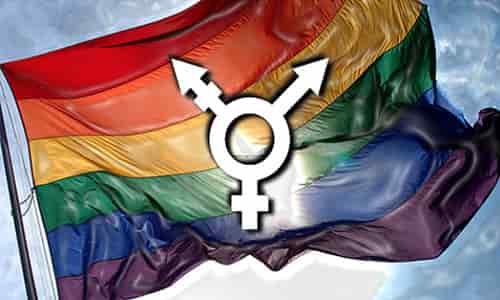 By Natasha Crain/ChristianMomThoughts.com April 28, 2016
Share this article:
Joseph Backholm, of the Family Policy Institute, is a short, Caucasian male. But he went to the University of Washington campus recently to see if students would affirm or reject his newly chosen identity: a 6'5" Chinese woman.

Here's the 4-minute video he produced with the interviews (you REALLY need to watch this, but I'll also summarize some key points below):

Backholm starts by asking the students what they think of allowing transgender people into the restroom of their chosen identity. Everyone is supportive.
Then he asks what they would say if he told them he was a woman. The students get a little more uncomfortable, but, as one girl said, "I'd say good for you. Yeah!"
Backholm then presses them to say what they would think if he said he was Chinese. Again, a student says, "I might be a little surprised but I would say, 'Good for you. Yeah, be who you are.'"
He then goes on to ask what they would think if he said he was a 7-year-old. One student went silent, realizing she didn't know what to say that would be consistent with what she had already been saying.
Another sheepishly said, "I wouldn't believe that immediately". And one said, "I probably wouldn't believe it but it really wouldn't bother me that much to go out of my way to tell you, 'No, you're wrong.' I'd just be like, 'Oh, OK, he wants to be 7 years old.'"
Finally, Backholm asked, "If I told you I was 6 feet 5 inches, what would you say?"
One student replied, "If you truly believe you're 6 feet 5, I don't think it's harmful. I think it's fine if you believe that. It doesn't matter to me if you think you're taller than you are...I wouldn't tell you you're wrong." And another said, "I feel like that's not my place as another human to say someone is wrong or to draw lines or boundaries."
Wow.
What should we make of this kind of thinking? A lot.
What's Really Driving the Culture Wars
Christian apologists (people who make a case for and defend the truth of Christianity) often emphasize the need to understand the difference between objective and subjective truth. Objective truth is a proposition which is true for all people, regardless of our opinions ("It's snowing outside").
Subjective truth is a proposition which can be true for some but not others ("Snow is beautiful"). Apologists have focused on this distinction because many people today claim that nothing is objectively true.
Such a claim is important when discussing Christianity because Christianity assumes objective truth exists--that Jesus is the one and only truth for everyone and it's not up to individuals to find whatever path to God they want.
While the distinction between objective and subjective truth is vital for everyone to understand, it really struck me while watching this video that this is not where most of our culture wars are being fought.
It was clear from these students' responses that they would agree many objective truths do exist--things like height and age. Not one of these students believed that Backholm was actually 7 years old or 6 feet 5 inches tall.
But every one of these students prioritized Backholm's right to comfortably believe whatever he wanted about himself over telling him what was objectively true. What this pointedly demonstrates is that debates over issues like gender identity are really just symptomatic of a more wide-spread disease:
That society has overwhelmingly abandoned the primacy of love-driven truth telling.
While most people wouldn't claim that speaking the truth is never important, it's taken a giant back seat to the primacy of making others feel good about believing whatever they want. Society has bought into the notion that leaving people alone with their beliefs is the loving choice, as long as they don't harm others with those beliefs.
Oh the irony! Could anything be more insidiously unloving than knowing someone has wrong beliefs that could be personally harmful, yet prioritizing silence as long as no one else gets hurt?
As Christian parents, we have the responsibility of raising a generation that understands what loving others really means. Genuine love is willing the best for someone else, even when that means sharing objective truths they may not want to hear.

What That Means for the Gospel...and for Christian Parents
This, of course, has direct implications for our ability to share the gospel today--a far greater concern than any individual issue. In an increasingly secular society, fewer and fewer people feel it's acceptable for people to share their faith (see the comments in response to my post last week as an example).
People of faith are expected to privatize their beliefs so everyone can be comfortable thinking whatever they want.
But this misses the most obvious point of all: What if Christianity is true? What if there really are eternal consequences for whether or not you accept Jesus as your Savior? Does it make any sense at all, if Christians are acting consistently within their worldview, that we would keep silent about what we believe to be objective truth for all?
At least one non-believer gets this. Atheist Penn Jillette (of the magician duo, Penn & Teller) has famously said:
"I've always said that I don't respect people who don't proselytize. I don't respect that at all. If you believe that there's a heaven and a hell, and people could be going to hell or not getting eternal life, and you think that it's not really worth telling them this because it would make it socially awkward--and atheists who think people shouldn't proselytize and who say just leave me alone and keep your religion to yourself--how much do you have to hate somebody to not proselytize? How much do you have to hate somebody to believe everlasting life is possible and not tell them that?"
Exactly.
To engage confidently and faithfully with a society which overwhelmingly no longer gets that, our kids need to be equipped with three things:
1. Knowledge of the truth. This is making sure that our kids have a clear understanding of the gospel and the overarching narrative of salvation history as given to us in the Bible. These are simply the facts of Christianity. Without a clear understanding of what the truth actually is, our kids won't be in a position to share it.
2. Conviction of the truth. Knowledge alone isn't enough when the basis of that knowledge is being constantly challenged. Our kids must have a deep conviction of why there is such good reason to believe that Christianity is true. This is why teaching our kids apologetics--the case for and defense of the Christian faith--is so critical today. Without giving them the deep conviction that what they believe is really true, we'll raise a generation content to stay silent...unsure of whether the risk to speak up is worth the likely hostility they'll encounter.
3. Courage to share the truth. Courage requires both knowledge and conviction, but there's one more ingredient: love. When we teach our kids what true love is--the genuine concern for the well-being of others--they'll understand there's no Godly choice but to speak up and speak truth...even when society has utterly abandoned love-driven truth telling as a cherished value.
If you need help explaining to your kids why there's good reason to believe Christianity is true--giving them the conviction they need--check out my new book: Keeping Your Kids on God's Side: 40 Conversations to Help Them Build a Lasting Faith.