Why Is It Never The Terrorist's Fault? 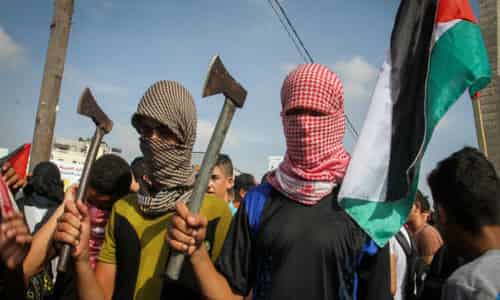 By Judith Bergman/Algemeiner.com April 28, 2016
Share this article:
A disturbingly clear pattern has emerged in the wake of the increase in terrorism around the world, especially in the West. Whenever there is a terrorist attack, the parents, friends and families of the perpetrators are always in "deep shock."

They cannot fathom from where their terrorist offspring, who had always been so "normal and good," got their inspiration. The parents have absolutely "no idea" what could possibly have prompted the attacks.
It is conspicuous -- and pathetic -- how uniform these parents of Muslim radicals are in their frantic denial of knowledge and responsibility for raising monsters that go out and commit such atrocities. But the politically correct mainstream international press never probes deeper and lets the parents off the hook easily.
After all, the international mainstream media pushes and encourages the very victimhood narratives that the parents' denials and feigned "shock" feed into in order to escape further scrutiny. It is astounding that no one in the media seriously questions these uniform denials.
Among all these stories of feigned shock and surprise, that of the parents of the Hamas terrorist who bombed the Jerusalem bus recently (wounding 20 people and killing himself) takes the prize. Not only do the parents insist they had "no idea" their son had been involved with the Hamas, they feel no remorse for his actions and astoundingly blame Israel and the Jews for his actions: "You Jews have to understand something: Abed al-Hamid did not come from a poor family; he came from an affluent one. He had his own car. A family with property and money ... a cultured household -- with manners, respect, education -- which opposes violence. You Israelis have to ask yourselves what causes a boy like ours to want to do such a thing. And I am telling you: Israel is responsible. Israel caused this generation to act this way. This generation has no future. No work. You pressure them and hurt them and create a hopeless situation for them. You are turning the young generation into what it is. The next generation, the young children, will be even more dangerous."
So while their terrorist son had everything he could wish for in material wealth and came from a "cultured household," he still had "no future" because of the Jews. What else is new?
But perhaps his parents were not so innocent. As his mother says, in what is difficult to characterize as anything other than a defense of her son's actions, "It was an act of self-defense. As an enlightened person, I would find it hard to do something like [blowing up a bus]. Perhaps I would have done things differently, maybe through writing. But everyone has his own way of taking part in resistance."
Her son was merely taking part in the "resistance" in his "own way." Perhaps his mother's "peaceful" idealization of the "resistance" (against what exactly? This is never clarified -- the "resistance" according to Abbas and Hamas is very simply the resistance against the existence of every last Jew on Israeli soil) gave her son an idea or two.

The hatred emanating from the words of these affluent, "cultured" parents and their unremorseful threats against Israeli society of a future, even more dangerous, generation, speak for themselves.
However, they are right about their son's generation. It is indeed dangerous, because it is steeped in unmitigated hatred, not only at home but at every turn it takes: in kindergarten, in school, on TV, in the mosques and on the streets -- in all these places, this generation is taught that killing Jews is a good thing.
As their son watched one terrorist after another celebrated as a martyr of Allah, having streets and squares named after them and their families richly rewarded by the PA, this son of "cultured" parents drew the logical conclusions of what he had been taught to worship and revere all his life, and went out and killed Jews. Who -- least of all his parents -- could possibly be surprised about that?
Ironically, the parents inadvertently made a big propaganda mistake by emphasizing that the terrorist had come from a financially comfortable, "cultured" household -- putting to rest, finally, the idea that terrorists become terrorists out of grievances, for lack of jobs, poverty and so on.
The answer to the question of what causes "a boy like ours to want to do such a thing" is not difficult: It is unadulterated hatred of the Jews, as taught to and inculcated in children all over the Muslim world, along with the accompanying refusal to accept a Jewish state in Israel. It is about the Islamic injunction to perform jihad against infidels and the ethics stemming from that injunction.
When Arabs massacred Jews in the Hebron pogrom in 1929 there was no "occupation" to "resist." There were just Jews to hate. Nothing has changed, apart from the rhetoric.
Originally posted at Algemeiner - reposted with permission