The Governor Of Virginia: Let's Be Civil About Killing Newborns 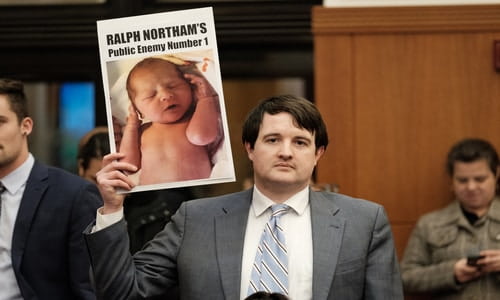 By Michael Brown/AskDrBrown.org February 04, 2019
Share this article:
For those who question whether abortion is really "baby killing," the governor of Virginia, Ralph Northam, has left us no doubt. Not only does he advocate the possible killing of a newborn baby, he wants us to be "civil" when discussing it.
This is reminiscent of Nazi leaders discussing the slaughter of Jewish children, women, and men in icy, dispassionate terms the way an accountant would discuss balancing the books. Such is the face of evil.
What He Said
Earlier in the week, it was reported that, "During a radio interview on Wednesday morning, Virginia Gov. Ralph Northam (D) seemed to endorse killing an infant after it has already been delivered alive (specifically, in the case of a baby surviving an abortion).

"In the scenario described by Northam, a baby would be born alive and resuscitated if necessary, and then doctors and the mother could 'have a discussion' which, based on context, would determine whether or not the child would be killed. While pro-life advocates view all abortion as infanticide, what Northam described would be infanticide by any definition."
The Deadly Progression
This, of course, is the deadly and logical progression of the spirit of abortion.
It is not satisfied with terminating the life of a 12-week-old baby which could not live outside the womb. It is not satisfied with terminating the life of a 32-week-old baby which could live outside the womb. It must also kill the baby outside the womb if the baby somehow managed to survive an abortion.
Help us champion truth, freedom, limited government and human dignity. Support The Stream »
That's what the infamous Kermit Gosnell did. Killing babies inside the womb wasn't enough.
To repeat: This is the deadly and logical progression.
That's why, in 1995, President Clinton vetoed the Partial Birth Abortion Ban Act. Then, 20 years later, in 2015, President Obama promised to veto the Born-Alive Abortion Survivors Protection Act (HR 3504).
As stated by Carol Tobias, president of the National Right to Life Committee (NRLC), "President Obama's subservience to the abortion lobby is so complete that he now threatens to use his pen to protect the abortionist who would kill a baby born alive, rather than to protect that helpless baby."
No Regrets
Getting back to the Gov. Northam, after his initial comments drew so much controversy, a reporter asked him, "Some members of your party have said privately that, and maybe one publicly, that your comments yesterday could have been more precise, or they weren't helpful."

So, he was asked, "Do you think, do you regret what you said yesterday or the way you said it?"
Northam replied without hesitation: "No I don't."
Gov. Northam's comments are reminiscent of Nazi leaders discussing the slaughter of Jewish children, women, and men in icy, dispassionate terms the way an accountant would discuss balancing the books. Such is the face of evil.
And then this, which is utterly baffling and completely contrary to the life-saving ethic of the medical profession: "I'm a physician. I'm also the governor."
He continued, "But when I'm asked questions, a lot of the times it is put in the context of being a physician, again realizing how we approach, how we manage patients, how we offer advice and counseling, so no I don't have any regrets."
So, he had no regrets about making his barbarous comments about killing a newborn baby. (And remember: The context of those comments was the proposal of a new abortion Virginia law that would have allowed a full-term, pregnant woman who was already dilating to choose to abort the baby even for alleged mental health reasons.)
None of that troubled the governor.
An Evil Suggestion
Instead, he said, "But I do find that how my comments, I did answer that question, I regret that those comments have been mischaracterized, the personal insults towards me I really find disgusting."
No, Gov. Northam.
It was your comments that were disgusting, sir. It was your beyond-extreme, pro-abortion, baby-killing words that were disgusting.

And while I regret that some people have responded to your ill-spoken words with ugly words of their own, you, sir, bear the responsibility for making such an evil suggestion.
Or perhaps we should expand the parents' "discussion" about whether to let any handicapped baby live? Or what about any unwanted baby? Maybe kill that one too?
And yet there's more.
Let's be Civil ... About Infanticide
Gov. Northam ended his response with this: "So again as I said in my comments about this earlier, we can agree to disagree, but let's be civil about it."
What? Let's "agree to disagree" about the ethics of infanticide? Let's "be civil" about terminating the life of a newborn?
With all respect, sir, that is not going to happen. Not as long as there are Americans with a conscience. Not as long as there are Americans with a heart.
We do recognize that abortion can sometimes be an agonizingly difficult choice for a pregnant woman, like a 16-year-old raped by her drunken uncle. While we still say that abortion was the wrong choice, we do not condemn the teen as a moral monster.
A Monstrous Proposal
In contrast, just as New York's new abortion law is monstrous and just as the failed Virginia proposal is monstrous, so also the governor's comments are monstrous -- and beyond.
Gov. Northam, we will never "agree to disagree" with you about infanticide. As Vice President Pence wrote, what you're advocating "is morally reprehensible and evil."
May the Lord grant you repentance.
Originally published at AskDrBrown - reposted with permission.