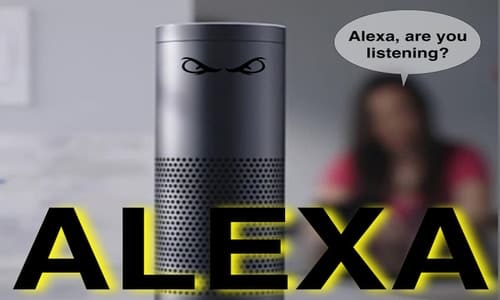 By Britt Gillette/End Times Bible Prophecy February 04, 2019
Share this article:
In millions of homes throughout the world, Alexa is listening. Many of you know who I'm talking about, but for those who don't, Alexa is the name of the famous voice behind Amazon's most popular devices, such as the Echo, Echo Dot, Echo Spot, Echo Show, and others.
Millions of homes around the world feature these devices. And millions of additional homes have similar products such as Apple's Siri and Alphabet's Google Home devices.
Speaking to Alexa has become a huge convenience for many people. But what most users don't realize is Alexa is always listening. And more importantly, Alexa is often remembering. That's right. While Alexa won't respond unless you call to her by name, by her very nature, she's always listening.

Otherwise, she wouldn't hear when you call her. But when you do, Alexa does more than listen. She records. Amazon's Echo devices constantly listen for the "wake word" - usually "Alexa" or "Amazon" (although users can customize their wake word). Once a device hears the wake word, it records your voice and stores the audio file on a remote server. Why?
Amazon wants to create a profile it can use to improve its recommendations and sell you more stuff. And more sales mean more profits. To build this customer profile, Amazon captures and stores everything you say when Alexa is awake. You read that right. It's not a misprint.
When awake, Alexa records and stores everything you say. Don't believe me? Then just check out these recent news stories. Together, they show just how intrusive Alexa is.
Alexa, Do You Promise to State the Whole Truth?
In 2015, James Bates claimed he awoke after a night of drinking and watching football to find his friend, Victor Collins, floating face down in a hot tub. Bates claimed it was a tragic accident. The authorities claimed it was murder. To prove it, they called an unusual witness - Alexa.
The prosecutor subpoenaed the defendant's Amazon Echo recordings to find out. Following a short legal battle, Amazon provided the audio files. Prosecutors hoped to find evidence among those audio recordings to prove their case, but they didn't. In late 2017, authorities dismissed the murder charges against Bates.
More recently, Alexa became a possible witness in the January 2017 double-murder of two New Hampshire women. The judge ordered Amazon to turn over any recordings from the Echo device found at the crime scene, stating "The court finds there is probable cause to believe the server(s) and/or records maintained for or by Amazon.com contain recordings made by the Echo smart speaker..."

Regardless of whether or not the recordings lead to a break in this case, one thing is certain. Your devices are listening to you. And that means millions of people have voluntarily placed eavesdropping devices in their own homes. Think I'm exaggerating? Then you definitely need to read this next story.
Alexa, Spy on my Neighbor
In Frankfurt, Germany, a man received access to over a thousand recordings of someone else's conversations when he asked Amazon to send him his own recordings. Amazon emailed him 1,700 audio files of someone else's conversations. When notified, Amazon deleted the files from the link, but they had already been downloaded. Amazon said it "resolved the issue" and promised to "further optimize" their processes.
To my knowledge, no other cases have been reported, so in all likelihood, this was a rare glitch. You probably don't have to worry about your neighbor hacking into your Alexa to spy on you - either on purpose or by accident. But the story shows it's possible. And that means you do need to worry. Not about your neighbor, but about your government.
The Rise of the Surveillance State
Many people have long foreseen the rise of an intrusive government surveillance state. What many failed to foresee is the willingness of so many people to aid in their own surveillance. Of their own free will, people are placing eavesdropping devices in their own homes, sometimes in their own bedrooms - allowing corporations, governments, and hackers to record their everyday conversations. And this willingness to give up personal privacy isn't limited to Amazon devices.
The latest doorbells record everyone who comes and goes from your house. Depending on their placement, they're capable of recording everyone who comes and goes from every house in the entire neighborhood. On Facebook, people upload personal pictures, location data, lists of friends, and large amounts of other personal information. They might do it to share it with their friends, but corporations, governments, and hackers can see it as well.

Even if you avoid Facebook, Alexa, Siri, and other such services and devices, you'll find it hard to escape their watchful eye. Other people can upload pictures of you to Facebook. And even if they don't tag or identify you, Facebook often will. Through its facial recognition technology, it automatically tags people. And even if you don't have Alexa in your home, if you're in someone else's home or within earshot of an Alexa device, you're at risk of being listened to and recorded.
Do you trust all this personal and private information in the hands of a large corporation? Maybe you do. But what about your government? And what about foreign governments who will find it more than easy to hack into these home devices?
As technology advances, these devices will become smaller, cheaper, and far more powerful. Cameras and microphones will become ubiquitous. And ever powerful forms of AI will search those camera and audio feeds for patterns. A government in control of such a system will know everything you do and say.
The Global Police State
As the world's corporations further develop these technologies, they set the table for a totalitarian global government. The Bible says such a government will appear in the last days (Daniel 2:40). It will trample and devour the whole earth (Daniel 7:23). No one will be able to oppose it (Revelation 13:4), and it will have such total control over daily life, no one will be able to buy or sell anything without its permission (Revelation 13:7). One man will rule this evil empire. He's known as the Antichrist. And Alexa is just the latest warning of his impending reign.
Learn more about the technologies being developed that could play a role in the rule of the Antichrist and other end time issues with our new featured book "Racing Toward Armageddon: Why Advanced Technology Signals the End Times".