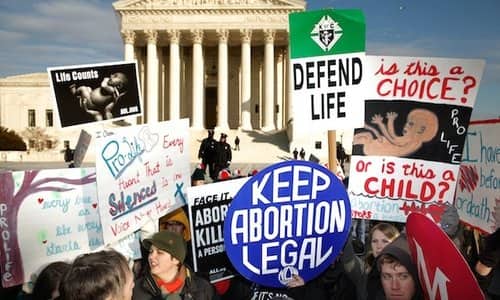 By Stan Guthrie/Breakpoint.org February 11, 2019
Share this article:
Fourteen years ago, Hillary Clinton attempted to stake out the middle ground for one of our nation's most contentious issues. Abortion, the New York senator said in a speech to abortion-rights supporters in Albany, "represents a sad, even tragic choice to many, many women."
It is doubtful that the "pro-choice" Mrs. Clinton could give such a speech today--at least to her fellow Democrats--without sparking an insurrection. In that historical nanosecond, the party of Jackson has gone from holding that abortion should be "safe, legal, and rare" (the widely praised formulation of President Bill Clinton) to asserting that it is an essential part of women's "reproductive healthcare" that cannot be limited for any reason--even if it means killing full-term infants still in (or just out of) their mothers' wombs.

In Hillary Clinton's New York, for example, Gov. Andrew Cuomo just signed the so-called Reproductive Health Act. The bill legalizes late-term abortions, even those performed right up to the moment of a child's birth. The new law also will permit nurses, midwives, and physician assistants to do the deed, making abortions that much easier to get.
But there was no talk of sad or tragic choices, and certainly none of making abortion rare. Instead, at the signing ceremony Cuomo and his fellow Democrats were caught on camera grinning as if the Jets had finally won another Super Bowl. Cuomo called the law a "a giant step forward in the hard-fought battle to ensure a woman's right to make her own decisions about her own personal health, including the ability to access an abortion."
To add insult to injury, Cuomo celebrated his legislative victory by ordering that several New York landmarks, including One World Trade Center, be lit up in pink. Pro-life activists cried foul, pointing out that 11 unborn children killed by the 9/11 terrorists are memorialized at the site.
New York isn't the only place seeking to make abortion safe, legal, and ubiquitous. In Virginia, Kathy Tran, a state legislator, sponsored a bill that she said would have authorized abortion "all the way up to 40 weeks." When asked if the law would permit a woman who was about to give birth and dilating to request an abortion, Tran said, "My bill would allow that, yes." The bill was turned aside by Virginia Republicans.

Even as the appetite for late-term abortions grows, the age of fetal viability continues to shrink. Now unborn children as early as 21 weeks of gestation have been born safely thanks to neonatal intensive care.
Other states taking up similar bills include Rhode Island and New Mexico, even though there has been no significant change in public opinion on abortion in recent years. According to the annual Marist poll, while a majority of Americans favors retaining legal abortion, most want to see it restricted to the first trimester. Only about 30 percent want the Supreme Court to lift all abortion restrictions.
So why the sudden rush to loosen abortion regulations? The new, more conservative makeup of the high court provides a clue. Fearing that Roe v. Wade, the Supreme Court's infamous decision legalizing abortion on demand across the nation, could be overturned, blue-state elites are attempting to scrap old laws that restricted the procedure prior to 1973.
Some, of course, such as those in New York and Virginia, are going much farther, pushing the moral boundary to include late-term abortions and even, perhaps, infanticide. National Review calls such efforts "manifest injustice." Robert George, the pro-life Princeton professor, dismissed the proffered idea that the Virginia bill is all about "women's health," "women's rights," and other obfuscations.
"What about the baby?" George said. "What about the child whose life is violently ended because an abortionist is willing to say that the killing of even a perfectly viable baby is indicated for the sake of the woman's 'emotional health' or in view of her 'familial situation'? The child, of course, is erased. He or she--his or her life--goes unmentioned. No justification for killing him or her is offered."
And why is this so? Why is an abortion--even of a full-term infant--no longer a sad or tragic choice but instead something to be celebrated? It's not because "science" requires it.
Omar L. Hamada is a board-certified obstetrician-gynecologist who has delivered more than 2,500 infants. Hamada says, "There's not a single fetal or maternal condition that requires third-trimester abortion.... There is absolutely no medical reason to kill a near term or term infant."
Another OB/GYN, David McKnight, concurs, saying, "...there is never a medical reason to kill a baby at term. When complications of pregnancy endanger a mother's life, we sometimes must deliver the baby early, but it is always with the intent of doing whatever we can to do it safely for the baby too."
So why are they doing it? I have a guess.
Most obviously, it has to do with what is now called sexual freedom--the ability to engage in sexual acts of any kind at any time with any consenting person, and all without consequence, such as disease or (worse!) pregnancy. Advocates deny both science and Scripture when they insist that the natural consequences of their sexual behavior are unnatural and are to be avoided, no matter the cost, even to the innocent unborn.
Life is short, so nothing can be denied us. This is postmodern hedonism--"eat, drink, and be merry, for tomorrow we die"--in all its ugly clarity. Can there be a more awful example of "suppressing the truth in unrighteousness"?

Yet there is more to it, I think. Postmodern men and women, having rejected the possibility of transcendent truth and ultimate meaning in their lives, nevertheless crave them. This is to be expected. As Blaise Pascal noted, "There is a God-shaped vacuum in the heart of every man which cannot be filled by any created thing, but only by God the Creator, made known through Jesus Christ." If Christ is no longer seen as a viable alternative to fill the vacuum, we will attempt to fill it with something else.
Many of us, I suspect, seek to fill it with sex, which, under God, can provide us with so many good things--oneness with our mate; feelings of transcendence, pleasure, even joy; and, for most of us, the blessing of children--which, when received with gratitude, point us to Him.
For many, sex is a religious experience in the best sense of the word. Some, however, take it too far, making sex integral to their identity and sense of self, without reference to the One who gave it to us. In this, tragically, they worship and serve created things rather than the Creator.
Nathanael Blake says that "our culture teaches us to identify with our desires and view their fulfillment as the greatest good alongside autonomous self-creation. Saying no to sexual desire, which is among the most powerful of human urges, is therefore seen as repression of an essential aspect of a person's humanity. The separation of identity and desire makes little sense in this outlook, which sees telling someone not to act on his sexual desires as a rejection of that person's essence."
This is why abortion is no longer seen as "a sad, even tragic choice" by members of the Sexual Left. They may acknowledge but no longer care about the humanity of the unborn--that's the real tragedy. I suspect that we won't be able to convince them to change their minds about the meaning and worth of an unborn human life until we change their minds about the meaning and worth of their own.
That is a job primarily not for activists but for the church. Are we up to it?
Originally published at Breakpoint.org - reposted with permission.