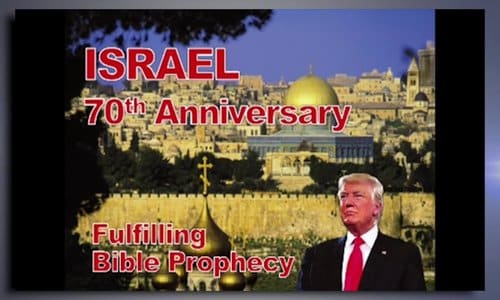 Seeing how the number 70 symbolizes restoration, it's interesting that restoration-themed events in Israel's history tend to occur at a 70-year interval:
• From the destruction of the First Temple in 586 BC to the completion of the Second Temple in 515-16 BC is 70 years.
• From the completion of the Second Temple in 515-16 BC to the completion of the wall around Jerusalem in 445 BC is 70 years.
• From the UN vote in favor of the establishment of the modern State of Israel in 1947 to the first recognition by a foreign power (US) that Jerusalem is its capital in 2017 is 70 years.
The most significant 70-year intervals correspond to the dates 1948 and 1967:
• From the first modern Jewish settlement in the Land of Israel (Petah Tikvah) in 1878 to the birth of the Nation in 1948 is 70 years.
• From the first major step in reestablishing the State of Israel (First Zionist Congress) in 1897 to the final step (restoration of Jerusalem) in 1967 is 70 years.
Notice that both watershed events related to Israel's restoration to the Land--the rebirth of the Nation in 1948 and the restoration of its capital in 1967--are preceded by a seminal event 70 years earlier. The odds against this occurring by chance are astronomical, suggesting divine orchestration.
While the events of 1948 and 1967 were vital to God's plan to redeem the Jews and the Holy City, they did not represent the endpoint. When we extend the pattern forward 70 years from 1948, we arrive at the biblical year spanning 2018-19.
1878-79 + 70 = 1948-49 + 70 = 2018-19
2018-19 is a logical endpoint for the 70-year pattern because Jesus says the generation who sees Israel reborn will see the end of the age (Matt 24:32-34). A generation is defined as 70 years in Scripture (Ps. 90:10).
Another reason 2018-19 is a logical endpoint for the 70-year pattern is that it represents the third date-milepost. The number three signifies completeness of testimony in Scripture:
"This will be my third visit to you. 'Every matter must be established by the testimony of two or three witnesses'" (2 Cor. 13:1).
CONVERGENCE

In addition to the 70 years from 1948, a timeline in Daniel's weeks prophecy (9:24-27) points to 2018-19. In verse 25, the angel Gabriel reveals how many weeks (seven-year periods) will elapse from the time a decree is issued to rebuild Jerusalem until Messiah the Prince comes to rule:
"Know and understand this: From the issuing of the decree to restore and rebuild Jerusalem, until the Messiah, the Prince, there will be seven weeks and sixty two weeks" (Dan. 9:25).
The modern-day rebuilding of Jerusalem began in 1969. When we add Daniel's seven weeks, or 49 years, to this date we arrive at 2018-19.
1969 + 49 = 2018-19
What are the odds that Israel's prophetic 70th year would correspond to the 49th year since the rebuilding of Jerusalem began?
If the 70/49 convergence in 2018-19 isn't uncanny enough, here's another: The "seven weeks and sixty-two weeks" in Daniel's prophecy add up to 483 years. When we add 483 years to the time that an earlier decree to rebuild Jerusalem's walls was issued in 1535 AD by the Ottoman Emperor Suleiman, we, again, arrive at 2018-19.
1535 AD + 483 = 2018-19
Thus, we have three key eschatological timelines pointing to 2018-19. But there's more. Israel's 70th year also corresponds to the calculated 6,000th year from Creation, the time that the seventh thousand-year (millennial) day known as the "Day of the Lord" begins.
6,000 AD - 3982-83 BC (Creation of Adam) = 2018-19
PEACE AND SAFETY
Another factor pointing to 2018-19 is the drafting of a Middle East peace plan dubbed the "Deal of the Century." This is crucial because the fundamental sign given by Paul to the Church to identify the season of the Rapture is people saying "peace and safety":
"Brothers and sisters, we do not want you to be uninformed about those who sleep in death, so that you do not grieve like the rest of mankind .... For the Lord himself will come down from heaven, with a loud command ... and the dead in Christ will rise first. After that, we who are still alive and are left will be caught up together with them in the clouds to meet the Lord in the air .... Now, brothers and sisters, about times and dates [of this event] we do not need to write to you, for you know very well that the day of the Lord will come like a thief in the night. While people are saying, 'Peace and safety,' destruction will come on them suddenly, as labor pains on a pregnant woman, and they will not escape" (1 Thess. 4:13, 16, 17; 5:1-3).
While there have been a number of peace plans proposed since the restoration of Jerusalem in 1967, the Deal of the Century is the only one to coincide with a convergence of key eschatological timelines, begging the question: if the talk of peace and safety in 2018-19 isn't that which Paul was alluding to, then what could he have been alluding to, and how will we recognize it when it occurs?
Assuming that Paul's peace-and-safety sign is manifesting before our eyes, consider the ominous scenario: Daniel's weeks prophecy assigns a period of 70 weeks (490 years) to redeem the Jews and Jerusalem. In 2018-19, exactly 70 years after the Jews' return to the Land, and 49 years after Jerusalem was restored as its capital, a peace plan has been drafted that purportedly aims to divide the Holy City.
Do you see the problem?
God's plan calls for the restoration of the Holy City, while the world's plan is to divide it. Dividing Jerusalem is prohibited because it belongs to the One who will reign there during the millennium (Jer. 3:17). The Lord has been patient for decades as Israel has tried to secure peace by giving away land. A plan that aims to divide the Land around the 6,000th year from creation, however--the time that Messiah the Prince is set to take possession--explains why destruction will come "suddenly" upon those saying peace and safety (1 Thess. 5:3).
PARALLELS TO PONDER
Exile--
Ancient Israel was exiled physically from the Land for 70 years. Is it possible that modern Israel's 70 years represent a time of spiritual exile in which the Jews are present in the Land yet separated from the heart of Messiah? The physical exile preceding the spiritual makes sense in light of Paul's teaching that the physical man, Adam, precedes the spiritual, Jesus (1 Cor. 15:45-49).
Judgment--
When Israel's 70 years of exile were complete, God judged Babylon (Jer. 29:12). Could the completion of modern-day Israel's 70th year mark the beginning of judgment for "spiritual Babylon," i.e. the world?
Holocaust--
2018-19 marks 80 years since the beginning of the seven-year Holocaust period (1938-45). Could 2018-19 also mark the beginning of the ultimate time of Jacob's Trouble? History records that during the Holocaust an estimated two thirds of the Jewish population of Europe was systematically murdered.
Similarly, Zechariah says that two thirds of Israel will perish during the Tribulation: "In all the land, declares the LORD, 'two-thirds will be cut off and perish, but a third will be left in it. This third I will bring through the fire; I will refine them like silver and test them like gold'" (Zech. 13:8, 9).