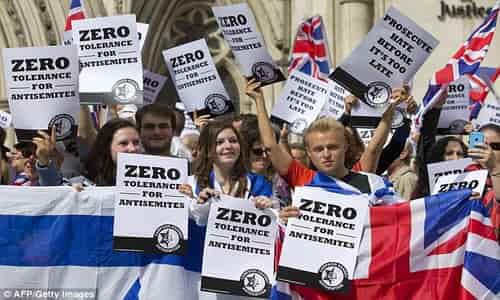 By Richard Kemp/Jasper Reid - Gatestone Institute May 03, 2016
Share this article:
Battle-hardened British soldiers were moved to tears by the horrors they witnessed at the Nazi charnel house of Bergen-Belsen when they liberated the concentration camp in April 1945.

Yet seventy years after thousands of troops fought and died to destroy the regime that murdered six million Jews, the scourge of anti-Semitism is again on the march across Europe.
In just one week, a British student leader, a Labour Party constituency MP, a London council leader, a member of Labour's National Executive Committee and even Labour leader Jeremy Corbyn have all been accused of being mired in Jew-hatred.
It is the tip of the iceberg. Each of these people was voted into power by an electorate that knew exactly what their views were. Had they not held these views they would not have been elected.
All are on the political left, but the problem does not stop there. The cancer of Jew-hatred today spreads from right to left throughout European nations and in all supranational bodies including the European Union and the United Nations.
It is led by politicians, human rights groups and the media, whose contorted worldview has contaminated ordinary people on a scale unimaginable possibly even to the arch-propagandist Dr. Josef Goebbels himself.
In the 21st Century, outside the Middle East, it is hard to express hatred of Jews publicly. So Jew-haters everywhere have adopted a proxy: the Jewish state. Israel is the acceptable target of their hate. That is why Labour MP Naz Shah's "solution," with chilling echoes of Reinhard Heydrich, was to "transport" all the Jews out of Israel, with the obvious implication that this would be done forcibly and violently.
It is why National Union of Students President Malia Bouattia advocated violence against Israel and accused the international media of being "Zionist-led." It is why Muhammed Butt, a London Labour council leader, shared a Facebook post denouncing Israel as "a terrorist state like ISIS."
It is why former London Mayor and Labour National Executive member Ken Livingstone sought to discredit Zionism by his assertion that Hitler supported it.
Where does all this hatred come from? Its long lineage begins with the Muslim prophet Muhammed and its modern form pre-dates Hitler. Back in the 1920s and 30s, murderous Arab gangs attacked Jewish communities in post-Ottoman, British Mandated Palestine and tried to drive them into the sea.
They were stopped by Britain's Captain Orde Wingate, who taught the Jews to defend themselves, fighting alongside British troops.
A few years later Amin al-Husseini, Grand Mufti of Jerusalem, made a deal with Hitler to bring the final solution to the Middle East, but the German advance was halted in its tracks at El Alamein by General Montgomery's Eighth Army. As soon as the State of Israel was established, 68 years ago this month, by resolution of the United Nations, five Arab armies fell on her with the intent of annihilation.
They failed, and ever since have been trying to destroy the Jewish state by military assault and terrorism in all its forms.
Recognizing their collective inability to eliminate Jews from their historic homeland by force, the Arabs have waged a pernicious and all-pervading propaganda war to demonize the Jewish State.
Their lies have included the blatant falsehoods that Jewish communities in Judea and Samaria are illegal under international law; that the Israeli government operates an oppressive apartheid state; that the IDF is strangling Gaza under an unprovoked and illegal siege; that successive Israeli administrations have been the sole obstacle to peace in the Middle East; and that Israeli security forces deliberately murder innocent Palestinians in Gaza and the West Bank.

Understanding that the might of the pen is magnified by the flash of the sword, the Palestinian leadership and their Iranian paymasters have frequently used violence to seize international attention. Provoking the Israelis into killing Palestinian people to ensure global condemnation was the true purpose behind the Gaza rocket wars and the recent wave of murderous knife attacks and car-rammings.
Why does the West pander to this religiously inspired hatred and bigotry? There are three fundamental reasons. First, Europe especially is consumed by imperial guilt. Those that are seen to have been historically oppressed and exploited can today do no wrong; Westerners must prostrate themselves at their feet.
Second, every European country depends on Arab oil for its continued existence and relishes the return of its petrodollars through arms sales and massive investment into their economies.
Third, Western governments understand the power of their ever-increasing Islamic populations. They fear the extremism of those who reject Western values and want to violently replace them with the ways of Islamic sharia law. And they calculate the mathematics of the Muslim vote at the ballot box.
They know that among these communities there is widespread and innate hatred of Jews and of Israel. Mehdi Hasan, a British Muslim political journalist, has confirmed: "anti-Semitism isn't just tolerated in some sections of the British Muslim community; it's routine and commonplace." Our politicians believe that by appeasement they will satiate the blood lust of the jihadists and gain the support of Muslim voters.
This is why we see Western leaders condemning Israel for insufficient restraint while defending itself from lethal Hamas rockets, when they know full well Israel has done all it can to avoid civilian deaths. It is why not one single EU member state had the courage to vote against the false condemnation of Israel for war crimes in the UN Human Rights Council last year.
It is why the British government unequivocally asserts that Jewish settlements in the West Bank are illegal when it knows they are not. It is why Prime Minister David Cameron, a friend and supporter of the Jewish state, accused Israel of turning the Gaza Strip into a 'prison camp' when he knew it had not.
These false and malicious condemnations fuel hatred of Israel and of Jewish people everywhere. They are driven and intensified by a media that is dominated by strident, virulent and unyielding anti-Israel bias.
What of the future? Imperial guilt in Europe shows no sign of diminishing. In fact, the ideology behind it is gaining strength as the EU seeks to undermine national identity in its drive for ever-closer union and the creation of a superstate.
Despite developing energy technologies, there is no prospect of significantly reduced dependence on Middle Eastern oil in the foreseeable future. And with the vast influx of refugees from Muslim countries into Europe, the urge to appease their anti-Semitic and anti-Israel attitudes can only increase dramatically.
This means Israel and the Jews are going to come under even more intolerable pressure, leading to a greater exodus of Jews from many Western nations and the increasing international isolation of the Jewish state.
But there is an alternative. It is that Western political leaders find the courage to reject the virulent anti-Israel prejudice. To speak what they know to be the truth about the situation in the Middle East.
To stop encouraging Palestinian leaders to believe their campaign against Israel is going to achieve its goal of destroying the Jewish state. And rather than supporting Palestinian hate with Western dollars, to impose sanctions against their racist and destructive behavior.
The consequences of Western politicians' continued weakness and appeasement are far greater than encouraging anti-Semitism and undermining the State of Israel.
It is the fatal and irreversible descent of their own countries. By allowing this anti-Semitic hatred, they are betraying the millions of citizens who have fought and died to oppose the sort of malevolent ideologies that are now incubating it.
Originally posted at Gatestone Institute - Reposted with permission