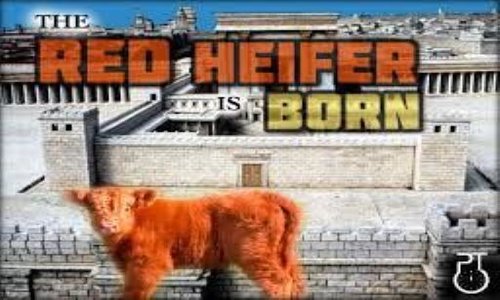 By Adam Eliyahu Berkowitz/Breaking Israel News March 13, 2019
Share this article:
After years of hard work and preparation, the rabbi charged with overseeing the red heifer claims that this Biblical commandment is on the verge of reappearing. Rabbi Azariah Ariel goes on record, explaining how the return of this ritual of purification will, and will not, change our lives.
The Temple Institute in Jerusalem has been working for three decades to educate the public and make practical steps to prepare for the Third Temple. After many years of research and work, they are close to bringing about an essential element: the Red Heifer. If they are successful, implementing the red heifer ritual will not only have implications for the Temple service but will also help Jews observe other commandments in a more complete manner.

The commandment of the red heifer is described by the sages as the most inexplicable of any in the Torah. Yet lacking a red heifer has left all of Israel ritually impure and unable to properly perform many other commandments. The Temple Institute in Jerusalem has tasked Rabbi Ariel with supervising the effort to reestablish this essential Torah commandment. As such, Rabbi Ariel is precise in his description of the commandment including its present-day implications.
"The Torah commands us to perform the mitzvah (Torah commandment) in order to be in a ritually pure condition," Rabbi Ariel explained to Breaking Israel News. "This is necessary for us to engage in anything that is holy or sanctified. It is important to understand that impurity is not any type of physical dirt or something. For most ritual impurities, bathing in a mikveh (ritual bath) is sufficient.
The highest level of impurity comes from contact with the dead and to purify this condition, the ashes of the red heifer are required. This condition comes not only from contact with the dead but to be under the same roof as a dead body also brings about this severe level of ritual impurity. This can typically happen if a person is inside a hospital in which a dead body is present. In such cases, the ashes of the red heifer are the only method for becoming ritually pure. Lacking the ashes of the red heifer, this condition remains forever."
The physical requirements for a red heifer are simple yet precise. This has led to an intense search for an exceedingly rare candidate.
"We know that there have been nine red heifers throughout history, the first having been prepared in the times of Moses and Elazar, the son of Aaron," Ariel explained. "A red heifer is a female cow that is red. In the language of the Bible, red is not exclusively what we know today as red. It also includes brown and other similar shades of red. This excludes black. All of the hairs on its body must be the same color."

The rabbi described a recent case in which a calf was found to have six white hairs near its nose which rendered it unfit.
"The animal must also be two years old. There can be no blemish, no holes in the ear. Until that point, it is considered a calf and not a cow. At that point, the cow can be slaughtered and prepared."
Though reinstating the Temple service in its entirety is dependent on the return of the red heifer ritual, the ashes of the red heifer are prepared outside of the Temple.
"This is not a sacrifice per se so it is burned in an area outside of the Temple, on the Mount of Olives. The ashes are collected. A tiny bit of the ashes are mixed with spring water and can be sprinkled on people in order to purify them."
Only a tiny bit of the ashes are required for the purification ritual so one heifer will suffice for all of the Jews.
"If properly prepared, one heifer is sufficient to purify the entire nation. There is no limit on how much wood can be burned with the heifer. Those ashes are also used to purify people. A tiny amount of ash, a few milligrams, can be mixed with a large quantity of water. In this manner, one heifer can indeed purify the entire nation."
"Even after the destruction of the Second Temple, ashes remained hidden away in different places, and were used to purify the Jews," Rabbi Ariel said.
But the return of the red heifer ritual will affect everyday life for Jews.
"The lack of ashes from the red heifer has prevented us from performing many Torah commandments," Ariel explained. "For example, today, when a Jew makes bread, they separate out a small amount for the mitzvah of hafrashat challah (separating out a quantity of dough for the priests). Today, the dough is disposed of. This is done because of the ritual impurity of the person making the dough and of the Kohanim (Jewish men of the priestly caste).
If we can reinstate the ritual of the red heifer, this dough can be baked and given to the Kohanim to eat. This baked product is one of the 24 Divinely ordained gifts designated for the kohanim. There are many commandments like this that we are unable to perform due to the lack of the ashes of the red heifer.

"The ashes of the red heifer are not necessary exclusively for Temple-related commandments. This will enable the complete performance of many mitzvoth we already do today."
Many believe that the search for the red heifer is motivated by a desire to hasten the arrival of the Messiah but Rabbi Ariel stated emphatically that this is not the case.
"There is a great misconception concerning the red heifer," Rabbi Ariel said. "Some people believe that by reinstating the ritual of the red heifer, we will bring the Messiah or reinstate the Temple service. This is an incorrect understanding. God does not do my bidding. We do His bidding.
The Jews were given the Torah and commanded to do the mitzvoth. It is not our intention to bring about a divine reaction through the red heifer. Our only interest is to perform the mitzvoth as they were given. The red heifer is a commandment so we perform it. It will allow us to perform other mitzvoth. Other than that, there are no expectations or additional agenda."
Ariel told Breaking Israel News that there are two calves that may potentially be used in for the preparation of the ashes. They are currently being raised in an undisclosed location under special conditions. Care must be taken that they are not scarred or blemished and they must remain separated from bulls.
"As per the Torah requirements, it is forbidden that any yoke or burden be placed on them. When the calves reach two years of age, they will be checked again to ensure that the color has not changed and that they have no blemishes."
"We are working on this but the most important thing we can do is to keep their location secret. If we succeed, in two years we will be permitted to perform more mitzvoth in the manner God commanded."
Originally published at Breaking Israel News - reposted with permission.