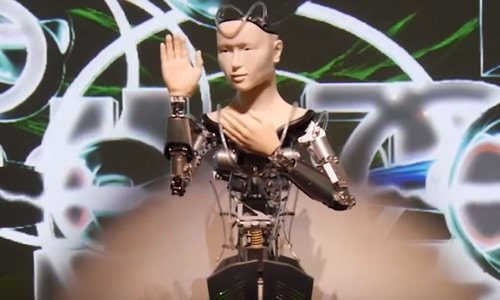 By Britt Gillette/End Times Bible Prophecy March 20, 2019
Share this article:
The Kodaiji Temple (a 400-year old Buddhist Temple in Kyoto, Japan) made world headlines this month when they unveiled a sutra-chanting android named Mindar. Mindar is modeled on a Buddhist deity named Kannon.
Worshiped throughout Japan, Kannon is known as the Buddhist Goddess of Mercy. Tradition says Kannon takes different forms to help people. Now, the Temple proclaims Kannon has taken the form of an android.
In an effort to appeal to younger generations, Kodaiji Temple administrators teamed with Professor Hiroshi Ishiguro, head of intelligent robotics at Osaka University. Ishiguro created Mindar, a robot with a human-like silicon face and hands, who is pre-programmed to recite The Heart Sutra - a revered Buddhist text.

Temple visitors can ask the robot questions, and using artificial intelligence, Mindar answers in Japanese while English and Chinese subtitles appear on the wall behind it. With built-in cameras, Mindar makes eye contact with questioners, creating the illusion it's alive and interacting with people.
In case you're wondering, this isn't the first Buddhist foray into robotics. In 2016, a Chinese Buddhist Temple unveiled a robot monk named Xian'er - a 24-inch bald robot draped in yellow robes. Xian'er could answer simple questions and featured a touch-screen display on his chest.
In 2017, a company in Japan unveiled a robot Buddhist priest programmed to chant at funerals. These robots are less complex than Mindar, but the concept is the same. So what makes Mindar truly different? It's Mindar's human likeness, interactivity, and one other trait - people worship it. That's right. You can see the video here. People are actively engaged in the worship of a robot statue.
Idol Worship is Alive and Well
Is this the dawn of a new era? Are android Buddhist deities revolutionary? Not really. They're just another form of idol worship. Mindar might move, make sounds, and react to visitors, but at the end of the day, it's a robot built with human hands. It's no different than a stone or wood idol a craftsman might carve. As God says:
"The blacksmith stands at his forge to make a sharp tool, pounding and shaping it with all his might. His work makes him hungry and weak. It makes him thirsty and faint. Then the wood-carver measures a block of wood and draws a pattern on it. He works with a chisel and plane and carves it into a human figure. He gives it human beauty and puts it in a little shrine. He cuts down cedars. He selects the cypress and the oak. He plants the pine in the forest to be nourished by the rain. Then he uses part of the wood to make a fire. With it he warms himself and bakes his bread.
Then - yes, it's true - he takes the rest of it and makes himself a god to worship! He makes an idol and bows down in front of it! He burns part of the tree to roast his meat and keep himself warm. He says, 'Ah, that fire feels good.' Then he takes what's left and makes his god: a carved idol! He falls down in front of it, worshiping and praying to it. 'Rescue me!' he says. 'You are my god!' Such stupidity and ignorance! Their eyes are closed, and they cannot see. Their minds are shut, and they cannot think. The person who made the idol never stops to reflect, 'Why, it's just a block of wood! I burned half of it for heat and used it to bake my bread and roast my meat. How can the rest of it be a god? Should I bow down to worship a piece of wood?' The poor, deluded fool feeds on ashes. He trusts something that can't help him at all. Yet he cannot bring himself to ask, 'Is this idol that I'm holding in my hand a lie?'" Isaiah 44:12-20 (NLT)

Mindar is just metal and plastic - no different than the metal and plastic in your smart phone. No different than the metal and plastic in the microwave oven that heats up your food. Yet, people are lining up to worship it. Just as God said, they take everyday objects - not wood and stone, but in this case, metal and plastic - and shape them into modern conveniences. Then, they take what's left over and make a god - a carved idol.
Even worshiping artificial intelligence is not new. In 2015, Anthony Levandowski, a former Google and Uber engineer, drafted the bylaws for a new church called "Way of the Future." Way of the Future worships "a Godhead based on artificial intelligence developed through computer hardware and software."
Levandowski told Wired magazine "What is going to be created will effectively be a god. It's not a god in the sense that it makes lightning or causes hurricanes. But if there is something a billion times smarter than the smartest human, what else are you going to call it?"
A Sign of Things to Come
So is there anything new about the worship of Mindar and other robot deities? Yes. For the first time I'm aware of, people are choosing to worship an animated image powered by artificial intelligence. This is notable because of the following verses from the Book of Revelation:
"And with all the miracles he was allowed to perform on behalf of the first beast, he deceived all the people who belong to this world. He ordered the people to make a great statue of the first beast, who was fatally wounded and then came back to life. He was then permitted to give life to this statue so that it could speak. Then the statue of the beast commanded that anyone refusing to worship it must die." Revelation 13:14-15 (NLT)
These bible verses describe the actions of the Antichrist and his false prophet in the end times. In the middle of the Tribulation, the Antichrist will enter the Jewish Temple and commit an act Jesus called "the abomination of desolation" (Matthew 24:15).
He'll demand to be worshiped. He'll also set up a statue of himself. The statue will be able to speak, and it will demand worship (Revelation 13:15). Mindar may well be an early prototype of the statue the Antichrist will use to defile the Jewish Temple. Using robotics and artificial intelligence, creating a lifelike statue that demands worship is now possible.

What Does This Mean?
So what does all this mean? It means time is running short. Previous generations couldn't do this. Their stone and wood idols couldn't speak. Ours is the first generation able to fashion idols that can. That means our generation is the first generation capable of fulfilling the Revelation 13 prophecies without the need for Satanic supernatural powers.
In and of itself, this isn't a big deal. But when you combine this latest news story with all the signs we see in the world today, it's a clear indication the end times are near and the rapture is even closer.
Here are just a few of the signs Jesus and the Hebrew prophets said to look for:
•  Israel back in the land (Jeremiah 23:7-8; Isaiah 11:12; Ezekiel 39:28)
•  Jerusalem back in Jewish hands (Luke 21:24-28)
•  The global spread of the Gospel (Matthew 24:14)
•  Increasing travel and knowledge (Daniel 12:4)
•  The Rise of the Gog of Magog Alliance (Ezekiel 38-39)
•  The rise of globalism (Revelation 13:7)
•  The Revival of the ancient Roman Empire (Daniel 2; Daniel 7; Revelation 17:10)
Now you can add the worship of talking idols to the list. Is all this a coincidence? No. Jesus said, "When you see all these things happen, stand and look up, for your salvation is near!" (Luke 21:28). It's time to look up. Jesus is coming.
Britt Gillette is author of the ebook Coming to Jesus as well as the books Signs of the Second Coming and Racing Toward Armageddon.