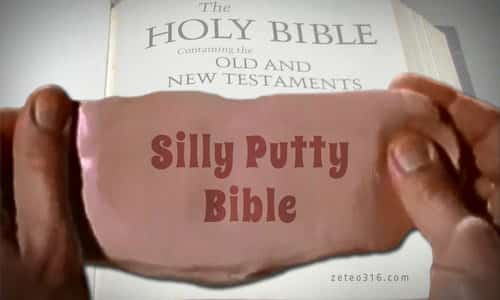 The thing about silly putty is that you can twist it any way you like. You are its master, not the other way around. The Bible is often treated in the same fashion - many professing Christians prefer to dictate to it. They don't want the Bible to intrude into their lives.
John MacArthur hits the bull's-eye in one sentence when commenting on the contemporary state of Christianity, the world and God's word. He writes:
The Bible is treated like Silly Putty, pressed and reshaped to suit the shifting interests of popular culture.
MacArthur states that when he began his ministry nearly half a century ago, he fully expected to deal with assaults on Scripture by skeptics and unbelievers. It's natural for the unbelievers' carnal mind to reject the truth and the Bible's authority (Rom 8:7).
However, from the beginning of his ministry until the present time, MacArthur notes that the most dangerous attacks against God's word have come from the evangelical community. He lists: "seminary professors, megachurch pastors, charismatic charlatans on television, popular evangelical authors, Christian psychologists, and bloggers on the evangelical fringe."
I believe the last category is growing and exerting influence among young Christians. Young bloggers emerge from seminary and immediately begin questioning some of the fundamentals of the faith. The word evangelical is also losing its traditional meaning and is long due for revision.
"The shifting interests of popular culture."
Churches which prioritize culture - dressed up in social justice issues - inevitably leave Scripture behind. A classic example is the Evangelical Lutheran Church of America (and many others). It first crossed my radar through ELCA New Testament Professor Barbara Rossing's materials. It was frustrating to read anything written by Rossing with a Bible in hand.
Her views on the book of Revelation, the denial of the reality of God's wrath etc, and her commitment to environmentalism, can be explained by an article I found online. It was an in-house discussion centered on the acceptance of the practice of homosexuality. Rossing argued that one should adopt a hermeneutics of diversity when interpreting Scripture.
She called it "faithful diversity." That's the silly putty MacArthur referred to.
Another example emerged from a 2005 Lutheran Advent Newsletter. The goal of the newsletter was to promote acceptance of homosexuality. One columnist suggested it was time for Lutherans to close their Bibles for a few months. He asserted that they weren't going to find the answer to the question there!
Well the answer is there but it wasn't what they wanted to hear. They didn't care what could be proven via God's word. It could be bypassed. The ELCA had already determined to serve the culture and was seeking ways to justify it.
ELCA Pastor Nadia Bolz-Weber takes a different strategy to serving culture. In her book, she wrote the following Bullet Point:
The Bible is not God. The Bible is simply the cradle that holds Christ. Anything in the Bible that does not hold up to the Gospel of Jesus simply does not have the same authority.
In many cases the definition of the gospel has been infused with social justice issues. Her Bullet point is familiar. Remember anti-Zionist Anglican priest Naim Ateek? He once said:
When confronted with a difficult passage in the Bible or with a perplexing contemporary event, one needs to ask such simple questions as: Does this fit the picture I have of God that Jesus has revealed to me? ... If it does, then that passage is valid and authoritative. If not, then I cannot accept its validity or authority.
In one chapter of her book, Bolz-Weber discusses her decision to become a pastor. Under the chapter's title she has 1 Tim 2:11-12. But it's there as a note of defiance. She doesn't attempt to debate Paul or seek scriptural approval. What mattered to her was the desire to become a pastor and her parents' approval.
In another chapter she turns the story of Philip and the Egyptian eunuch upside down (Acts 8:26-40). Suddenly the eunuch represents the lowly LGBTI community sent to teach Philip (us) a life lesson - not the other way around.
This is a practical example of diversity values trumping the expositional teaching of the Bible.
Many U.S. churches are not only embracing homosexuality, they also defend Planned Parenthood. In one spectacular example of circular reasoning a Beliefnet columnist posited that the Bible is silent on abortion. Therefore, she argued, each person, created in God's image, must exercise moral choice based on that "individual's dignity and autonomy."

The Bible is silent on many other things we know are wrong. Yet when clear biblical injunctions against murder and infanticide are raised, a counter-argument is to challenge the status of the unborn child. But, just in case, the article spins the gross lie that abortion is ultimately doing an unwanted baby a favor:
Because we believe in the sanctity of human life that we believe a child has the right to enter the world wanted and loved. Because we believe in the sanctity of human life we are sensitive to the effects of an unwanted pregnancy upon individual women, upon their loved ones and their families, and we recognize that they, not we, must determine what is best for those directly concerned and involved.
Does God have any say?
The serpent couldn't have turned a better argument (Gen 3:1). It's not murder because it's not a baby in one instance: but abortion is morally acceptable, even if it's a baby, in another instance because it's better for mother and child in the long run.
Examples like this are almost endless. One popular pastor blogged the following gem:
The truth is, you can completely doubt the accuracy of the bible, and yet be bible-minded to such a degree that Christ is clearly alive in and through you.
This same fellow recently suggested that Jesus was born "intersex." What would motivate him to preach that?
Just over seventy years ago Wilbur M. Smith wrote a book (Therefore Stand ) warning about was coming. He based it on what had occurred in the past, and what was developing in his day. Smith warned that certain institutions (Humanism etc) and other cultural dynamics were influencing schools, universities and even Christian institutions.
He saw an increasing trend where professing Christian ministers began to deny God's word. They questioned inerrancy, creation, Christ's resurrection, sin and future judgment. They treated the Bible as an antiquated book of moral platitudes. Does it sound familiar?
What these self-described Christian leaders have done is dethrone God's word by enthroning the culture in its place. Instead of identifying in Christ, they embrace their sin natures. There is little to no teaching about holy living and repentance.
Fundamentalist objections to sacred social narratives are treated with contempt. One cannot biblically question abortion, homosexuality or same-sex marriage etc without being classified a homophobe or hater.
One day these slaves to cultural whims will lose the sanctimonious mask they're hiding behind. The truth is that in departing from Scripture they've begun worshiping another god.
But whether one likes it, or chooses to disbelieve it, we'll all eventually bow the knee to Jesus Christ (Phil 2:9-12).
And it's far better that we faithfully do it now rather than later.
But the cowardly, unbelieving, abominable, murderers, sexually immoral, sorcerers, idolaters, and all liars shall have their part in the lake which burns with fire and brimstone, which is the second death. Rev 21:8
Applying a silly-putty interpretation to that warning won't change its Truth.
Originally published at zeteo316.com - reposted with permission