Turning Anti-Semite Omar Into A Victim 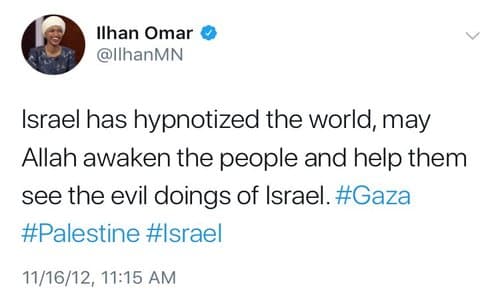 By Jonathan Tobin/JNS.org April 17, 2019
Share this article:
Imagine if there was a member of Congress who openly supported an anti-Semitic movement, issued multiple statements promoting traditional themes of Jew-hatred and then gave a speech at a fundraiser for an organization founded as a front group for terrorists in which the 9/11 attacks were described as merely as "some people did something."
And then imagine if the person who did all these things was embraced as a heroine and, more importantly, a victim of hate.
That's the enviable position that Rep. Ilhan Omar (D-Minn.) finds herself in after doing all of the above in the space of just the three months since she was sworn in as a new member of Congress in January.

Her latest surge of publicity involved a speech she gave for the Council of American-Islamic Relations (CAIR) and the pushback about her 9/11 comments, whereby many Democrats embraced her as the victim of a hate crime because The New York Post published a cover reminding her about the horror that "something" entailed.
Omar has received death threats in recent months, and there is no excuse for that. No one should be threatened with hate or death for expressing their views, even when they are hateful as some of Omar's have been.
But what demands our attention here is not the contents of her CAIR speech or even the Post cover with its depiction of the iconic photograph of the World Trade Center towers in flames, but rather a curious process by which a person who has made a name for herself largely on the strength of anti-Semitic incitement has been transformed into a victim.
In doing so, those who have rallied to her defense have resurrected the myth of a post-9/11 backlash against Muslims. That has shifted the narrative of that trauma from one of an Islamist terror war against the West into one that focused on the victimization of Muslims.

But the ability of Omar and her defenders to use it to effectively deflect charges of anti-Semitism and to essentially legitimize her as a public figure is something that out to alarm everyone, no matter what your politics or religious beliefs.
Omar, like her fellow controversial members of the Democrats' freshman class, Reps. Rashida Tlaib (D-Mich.) and Rep. Alexandria Ocasio-Cortez (D-N.Y.) have gotten far more publicity than they probably deserve for their meager accomplishments so far. Still, the trio of radicals have not only mesmerized the media, but also proven to have considerably more influence over their party than most political observers would have thought.
Nothing demonstrated their unexpected power more than the way that Omar's allies--led by the ubiquitous AOC--were able to prevent the House of Representatives from condemning her after she slandered supporters of Israel and Jews by claiming that they were buying Congress ("It's all about the Benjamins baby") and exhibiting "dual loyalty."
Omar refused to back down and found herself the object of much public sympathy for what supporters claimed was an attempt to single her out solely because she was black, Muslim and an immigrant. Omar emerged triumphant from that fiasco. If there was any doubt about that, it was removed by the way Democrats instinctively moved to protect her from criticisms of her 9/11 remarks, and instead condemned the Post and Rep. Dan Crenshaw (R-Texas) as racists for calling her out.
In one sense, the kerfuffle is a typical inside-the-Beltway absurdity, with AOC asking Crenshaw--a decorated former Navy SEAL who lost an eye fighting in Afghanistan--what he has ever done to fight terrorism. But this is more than just the usual political tit-for-tat on Twitter.
In her speech to CAIR, Omar claimed that the group had been founded after 9/11 in order to defend Muslims against a backlash after the attacks. This is patently false. CAIR was founded in 1994 as a political front for the Holy Land Foundation, a group that raised funds for the Hamas terror group that was eventually shut down by the Treasury Department. Her support for CAIR is consistent with her backing for the anti-Semitic BDS movement.

But the broader point to be made here is the way the effort to shift the discussion about 9/11 from a seminal moment in the long struggle against Islamist terror to a mere excuse to discriminate against Muslims is now being used to downplay Omar's anti-Semitism.
The debate about this mythical backlash has been going on for a decade, especially during the controversy over an abortive attempt to build an Islamic center within the shadow of the fallen World Trade Center towers. At that time, I wrote in Commentary magazine about the way false fears were being used to make Muslims appear to be the true victims of the slaughter.
The mainstream media had accepted as truth the claims that Muslims had been the subjects of a wave of discrimination after 9/11, even though there was no objective proof to back up that assertion.
To the contrary, the U.S. government, the mass media and American popular culture had bent over backwards to avoid stigmatizing Muslims. As FBI hate-crime statistics in the years after 2001 showed, there had been no discernable evidence of a backlash of hate.
During those years and the following decade since the World Trade Center mosque debate, statistics consistently showed that Jews remained the prime focus of religious hate in this country with anti-Semitic attacks or incidents of any kind far outnumbering those against Muslims.
While all forms of bias are despicable, the backlash narrative was, as I noted in 2010, a successful effort to "redirect, redefine and rewrite the unambiguous meaning of an unambiguous event" in order to defame the United States.
But it's now being weaponized again to portray an unapologetic anti-Semite like Omar as a victim. The point of this campaign is to protect her and all others who seek to delegitimize Jews and supporters of Israel with an impenetrable cloak of immunity that belongs to victims.
Decent persons--Jewish and non-Jewish, Republican or Democrat--cannot allow this big lie to stand unopposed.