The Pitfalls Of Chrislam - Christian Women Take Up the Hijab 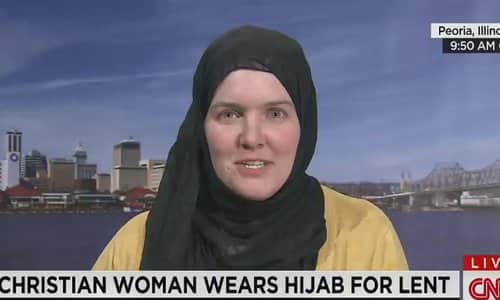 By Tom Olago May 10, 2016
Share this article:
Is it OK for a Christian to wear a hijab (Islamic headscarf for women), or show solidarity with Muslims in other ways considered spiritually related? Are Muslims and Christians serving and worshiping the same God?

The authors of the washingtonpost.com article, Asra Q. Nomani and Hala Arafa further stated: "We reject this interpretation that the "hijab" is merely a symbol of modesty and dignity adopted by faithful female followers of Islam...This conflation of hijab with the secular word 'headscarf' is misleading. "Hijab" literally means, "curtain" in Arabic. It also means "hiding", "obstructing" and "isolating" someone or something. It is never used in the Koran to mean headscarf...No matter what formula you use, "hijab" never means headscarf.  The media must stop spreading this misleading interpretation".
They then proceed to clarify in disturbing terms their assessment of the true meaning of the hijab: "To us, the hijab is a symbol of an interpretation of Islam we reject that believes that women are a sexual distraction to men, who are weak, and thus must not be tempted by the sight of our hair. We don't buy it. This ideology promotes a social attitude that absolves men of sexually harassing women and puts the onus on the victim to protect herself by covering up".
Their advice to Christian women? "Please do this instead: Do not wear a headscarf in "solidarity" with the ideology that most silences us, equating our bodies with "honor." Stand with us instead with moral courage against the ideology of Islamism that demands we cover our hair".
An article published in December 2015 by patheos.com also examined what it means to wear the hijab.  Its author, 'Jane the Actuary' concluded: "Here's the bottom line:  wearing hijab is a religious act....In other words, hijab-wearing is, in America, a  form of religious identification, a way to show the outside world that you are Muslim.
It's a way to take on a religious practice, to commit yourself to greater devotion even at a cost -- in which the actual practice doesn't matter so much as the intention that, in doing so, one commits oneself to God more fully...But the bottom line is this:  given what hijab is fundamentally about, is it appropriate for a Christian to wear it?"
Despite evidence to the contrary, some professing Christians still think so.  Leo Hohmann last December reported for Wnd.com that Chicago's Vernon Hills High School held a "Walk a Mile in Her Hijab Day" as non-Muslim female students were encouraged to wear the hijab or Islamic head covering.
The purpose of the Vernon Hills High School event was ostensibly to give non-Muslim female students the opportunity to wear the head covering and gain a "better understanding of the Muslim faith" and "denounce negative stereotypes," the Daily Herald of Chicago reported.
But several former Muslims now living in the U.S. tell WND that such "hijab" events, which are popping up at high schools and college campuses across the U.S., will actually achieve the opposite.
"To me, there are two things troubling here," said Shahram Hadian, who grew up Muslim in Iran and emigrated to Canada before moving to Washington state and becoming an evangelical Christian pastor.
Hadian said the Muslim Students Association (MSA) indoctrination campaign has been rampant on college campuses for years but now it is mobilizing in U.S. high schools as well. At Boise State University, for example, the MSA holds an Islamic Week every year and for an entire day during that week, they encourage every woman on campus to wear the hijab.
"But the troubling thing is this:  how is MSA now getting access to our high schools? And number two: how is that not the state promoting a religion?" Hadian said of the Chicago event.
Would the high school, for instance, allow a Christian student group to encourage non-Christian students to wear crosses for a day? Or what about a Jewish group encouraging Muslims to wear the Star of David?
"It's just hypocrisy at its pinnacle," Hadian said. But the Muslim Brotherhood is very clever in the use of propaganda, he said, and apparently the atheist lawyers at the ACLU have given the MSA a pass.
During the Holy Land Foundation terror trial in 2007, the MSA was exposed as a Muslim Brotherhood front in a broad conspiracy to take over the U.S. slowly through nonviolent "cultural jihad," which involves immigration, high birth rates among Muslim families and using the nation's own civil liberties against it.
Dr. Mark Christian, a former child-imam who grew up in Egypt and now lives as a Christian in Nebraska, said Western cultures are making a huge mistake by embracing a key element of Shariah.
"At a time when a rising number of Muslim women in the Middle East, especially in Egypt, are taking off their hijab for good, liberating themselves from its symbolism of enslavement and inequality and from being labeled as radical Muslims in the wake of the Arab Spring and the reality of radical Islam that it brought in the Middle East, and at a time when many Muslim women are trying to find their freedom and advocating for the freedom of their fellow Muslim women, I find it treasonous that in America liberals are resorting to such actions, encouraging hijab and enslavement of women and labeling them as a sex objects," said Christian, who heads up the Global Faith Institute.
"When those in the West advocate for hijab, they are not siding with the peaceful Muslims but with the radicals," he said. "They are not advocating freedom but enabling and encouraging torture, inequality and the inhumane treatment of women in Islam."