Anticipating Trump's 'Deal Of The Century' 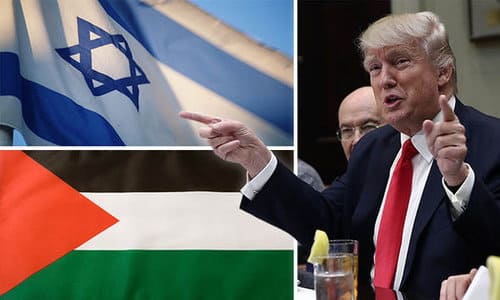 By Daniel Pipes/JNS.org April 22, 2019
Share this article:
U.S. President Donald Trump's peace plan for the Palestinian-Israeli conflict surfaced two years ago and to this day -- remarkably -- only he and a handful of aides know its precise details.
A stream of leaks, however, contains enough internal consistency that their collation, supplemented by conversations with administration officials, provides a plausible outline of the plan's contents.
This outline suggests the plan boils down to a grand exchange: The Arab states recognize Israel and Israel recognizes Palestine, both with capital cities in Jerusalem.

This approach builds on elements forwarded by Egypt's President Abdel Fattah El-Sisi in 2016, the Obama administration in 2009, the 2002 Arab Peace Initiative and even my 1990 symmetry plan.
These prior plans either had Israel go first or called for simultaneous steps; in contrast, Trump's has the Arab states initiate, with Israel responding. This change prompted Palestinian Authority leader Mahmoud Abbas to immediately reject the "deal of the century" when he met with Trump in May 2017; one report noted that "Abbas has long feared such a plan" and "vehemently opposed" it.
Despite that reaction, the purported deal contains many elements favorable to the Palestinians:
- Palestine will consist of Areas A and B of the West Bank in their entirety and parts of Area C; in all, it will constitute 90% of the West Bank;
- The capital is within or near Jerusalem's expansive municipal boundaries, perhaps in an area stretching from Shuafat to Isawiya, Abu Dis and Jabel Mukaber;
- An international body oversees a joint P.A.-Israeli administration governing Jerusalem's Holy Basin (including the Old City);
- A joint P.A.-Jordan body controls Jerusalem's Islamic sanctuaries;
- Egypt, Jordan and Lebanon give more rights to their Palestinian residents;
- Jewish residents in smaller West Bank towns are relocated;
- A land passage connects the West Bank and Gaza Strip;
- Gaza joins Palestine when the P.A. regains control of it;
- Washington organizes a gigantic economic aid package (perhaps $40 billion, or roughly $25,000 per Palestinian resident of the West Bank) for the P.A.;
- Palestinians enjoy temporary access to select Israeli seaports and airports until foreign funds build exclusive P.A. facilities.

In exchange, the Palestinians apparently will be asked to accept several limitations:
- Continued Israeli military control over Palestine's borders, its air and sea access, and the Jordan Valley;
- Legal recognition by the U.S. government (and perhaps annexation by Israel) of larger Jewish towns amounting to 10% of the West Bank;
- Giving up the "right of return" for Palestinians living outside Israel in favor of compensation.
Assuming this outline to be correct in the essentials, it raises three main worries. First, the benefits to Israel are illusory. Its peace treaties with Egypt (signed 40 years ago) and Jordan (25 years ago) did not lead to significant trade, friendly diplomatic relations, or an increase in human contact.
Rather, they intensified anti-Zionist sentiments among Egyptians and Jordanians while improving their governments' arsenals. The same pattern of heightened hostility also followed other Arab diplomatic agreements with Israel -- Lebanon in 1983, the PLO in 1993; why should Saudi or Bahraini recognition be otherwise? In other words, Arab state recognition hardly benefits Israel and could hurt it.
Ending the Palestinian claim to a "right of return" is Israel's other illusory benefit. For a preview of the hollow theatrics ahead, just recall the farcical 1990s non-change of the PLO charter to drop its call for Israel's destruction.
Second, despite the Palestinians gaining real and irreversible benefits (money, territory, legitimacy), they with certainty will continue their century-old pattern of rejecting Israel through campaigns of delegitimization and violence, as has been the case since the first Palestinian-Israeli agreement in 1993.

That's because Shimon Peres' discredited "New Middle East" idea, that enriching and rewarding Palestinians makes them peaceable, underlies the reported Trump plan. Long experience, however, shows that these benefits make them more inclined to eliminate the Jewish state. In brief, the P.A. will pocket "Palestine" and intensify its anti-Zionism.
Third, should Israelis complain to Trump about that delegitimization and violence, he will likely respond with annoyance: The Palestinian-Israeli conflict is now "off the table" and they should move on. Should they persist, his predictable rage will damage not just Israel but also the anti-Tehran campaign and anti-Islamist efforts in general.
In short, the reported plan repeats the great miscalculation of traditional Palestinian-Israeli diplomacy by asking too little of Arabs and too much of Israelis. I predict that it will fail, just as did those of presidents Bill Clinton, George W. Bush and Barack Obama.
Therefore, Americans concerned about Israel, Iran and Islamism need to prepare for the imminent unveiling of what could be a problematic plan. Yes, so far, Trump has been "the most pro-Israel president ever" but, as the Bible reminds us, "put not your trust in princes."
Originally published at JNS.org - reposted with permission.