A Tale Of Two Somalis & Their Dark Upbringing Regarding Jews 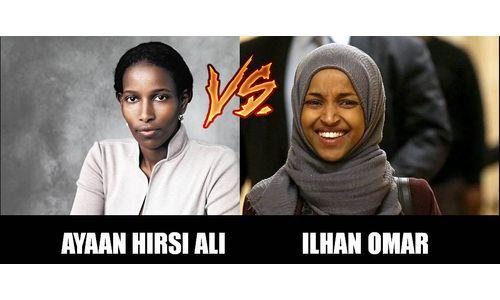 By Andrea Levin/JNS.org April 30, 2019
Share this article:
In commentary on Minnesota Rep. Ilhan Omar's denigrating of Jews, a vital dimension of her outbursts has been largely overlooked. Pundits have seen her motivation as deliberately rejecting the norms of political discourse to push the Democratic Party into radical anti-Israel positions. And it may be true that she seeks to drive the old guard away from traditional alliances and protocols.
She outfoxed senior members of Congress, who had aimed to issue a censure of anti-Semitism and assure the public they deplore the resurgent Jew-hatred. Omar and her allies flipped the script and neutered House Speaker Nancy Pelosi's resolution, adding Islamophobia to the language and removing the focus on bigotry against Jews. The maneuver was greeted gleefully by Omar and company who are defying the traditions of melting pot America.

But a question that hasn't been asked in media coverage is what prompts her anti-Jewish prejudice? Whence comes the voluble contempt for another people tweeted in her brazen, ugly tropes?
Another Somali refugee of an altogether different cast of character, Ayyan Hirsi Ali, has written extensively in her autobiography, Infidel, and elsewhere about the pervasive anti-Semitism around her in the Muslim world. She's observed that "as a child growing up in a Muslim family, I constantly heard my mother, other relatives and neighbors wish for the death of Jews, who were considered our darkest enemy. Our religious tutors and the preachers in our mosques set aside extra time to pray for the destruction of Jews."
She's noted that "all over the Middle East, hatred for Jews and Zionists can be found in textbooks for children as young as 3, complete with illustrations of Jews with monster-like qualities. Mainstream educational television programs are consistently anti-Semitic. In songs, books, newspaper articles and blogs, Jews are variously compared to pigs, donkeys, rats and cockroaches, and also to vampires and a host of other imaginary creatures."
Hirsi Ali described a school during her years in Kenya in which the teacher taught that Jews, monstrous in shape, controlled the world, and "only if all Jews were destroyed would peace come for the Muslims." Like the other young students, she feared and dreaded this pervasive menace.
Both Somalia and Kenya were also home to Omar, whose now famous comments include claiming: "Israel has hypnotized the world, may Allah awaken the people and help them see the evil doings of Israel."

She's tweeted regarding the focus on Israel in Congress that, "It's all about the Benjamins baby." Which is to say that it's all about the nefarious money-wielding Jews.
Omar's ignorance extends to basic political facts related to Israel and AIPAC, seen in her tweeting that "AIPAC and Netanyahu openly opposed the Oslo Accords ... " AIPAC did not oppose Oslo, but supported this policy of the government of Israel.
Likewise, she claims: "AIPAC and Netanyahu openly opposed President Obama's modest proposed settlement freeze in 2009--as part of the 2010-2011 peace talks." On the contrary, AIPAC did not oppose the policy and Benjamin Netanyahu instituted a 10-month settlement freeze--the first-ever of its kind by an Israeli prime minister.
As Hirsi Ali relates, "millions of Muslims have been conditioned to regard Jews not only as the enemies of Palestine but as the enemies of all Muslims, of God and of all humanity." Their leaders have raised "generations to believe that Jews are 'the scum of the human race, the rats of the world, the violators of pacts and agreements, the murderers of the prophets, and the offspring of apes and pigs.' "
Omar would have likely been exposed to this bigotry in Somalia and Kenya, and might not have escaped it even when she got to America. As MEMRI (Middle East Media Research Institute) has documented, numerous mosques in the United States echo the same rabid messages.
In Omar's hometown of Minneapolis at a mosque this March, an Imam declared: "Egyptian President Abdel Fattah Al-Sisi is a 'terrorist son-of-a-terrorist' that is carrying out the 'Zio-Crusader agenda' of the Zionists, and the tyrannical and criminal Templar Crusaders."
At other mosques around America, anti-Jewish messages are proffered to congregants. In Detroit in January, the imam stated: "Look at the global banks, the billionaires. ... All those are from among [the Jews]. Their culture is a culture of usury."

A Houston Imam told his flock: "Judgment day will not come until the Muslims fight the Jews. The Muslims will kill the Jews, and the Jews will hide behind the stones and the trees, and the stones and the trees will say: Oh Muslim, oh servant of Allah, there is a Jew hiding behind me, come and kill him."
Omar's utterances are stunning on many counts, but they should raise questions about the influences in her life that have instilled bigotry against Jews and Israel. Her preliminary responses to criticism of her statements were equivocal apologies, then further slandering of Israel's supporters.
Perhaps being so imbued with the lessons of her youth in Somalia and Kenya--and possibly America, too--the ethos of the wider culture stressing tolerance and respect has yet to be learned.
The question is: Will Omar shed the old hatreds and genuinely--not just perfunctorily--accept others of all faiths with respect, as Ayyan Hirsi Ali and others have done? And what forces today are fueling anti-Semitism in America? As Ilhan Omar continues to offer distorted claims against Israel and Jews, these issues need media sunlight and exposure.
Originally published at JNS.org - reposted with permission.