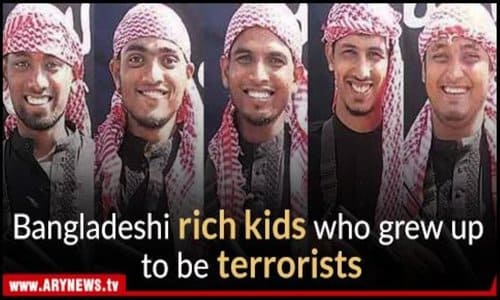 By Stephen Flatow/JNS.org May 01, 2019
Share this article:
It turns out that the Islamist terrorists who slaughtered more than 350 people in Sri Lanka came from one of that country's wealthiest families. This news will surely come as a surprise to those who have become accustomed to hearing political leaders and pundits claim that poverty is what drives young Muslims to become terrorists.
The whole premise behind the more than $10 billion that the United States gave to the Palestinian Authority from 1994 to 2017 was that Palestinian unemployment will lead to Palestinian terrorism--so we better give them money, and lots of it.

Fortunately, the Trump administration has reduced that aid, at least for now. Tragically, some Democrats in Congress are urging the administration to renew the aid. It seems that they haven't learned anything from history--that is, the long history of well-to-do, educated Palestinian Arabs choosing to become terrorists. Not to mention the physicians and academics who head terrorist organizations.
Every few years, some American reporter in Jerusalem is shocked to discover this reality. I recall how The Washington Post's Jerusalem bureau chief, William Booth, was positively stunned in 2016 when he realized that the latest Palestinian suicide bomber was affluent and educated.
The bomber, Abdel Hamid Abu Srour, "did not grow up in a refugee camp," Booth reported. He was "a Palestinian preppy, the scion of a well-to-do and well-known clan of eight prosperous brothers, who own and operate a string of furniture outlets and are rich enough to take their young sons for holidays in Jordan and set them up with their own shop selling clothes."
One uncle, Mahmoud Abu Srour, told Booth: "We are financially comfortable, you could say very comfortable." At a family gathering to mourn Abu Srour's death, his teenage cousins "wore pricey watches, skinny jeans and fancy sneakers."

Abu Srour wasn't a high school dropout, either. When his grades in high school lagged (perhaps bomb-making was distracting him from his midterms), "he wanted to retake subjects and redo his exams." He told relatives that he wanted to become a veterinarian.
In short, Booth concluded, the bomber "doesn't fit the profile of a desperate Hamas operative." But the only reason he didn't "fit the profile" is that the profile was created by people like William Booth, who make sociological assumptions that fit their preconceived political notions, but don't necessarily have any basis in reality.
The same is true for other (non-Palestinian) Muslim terrorists. Don't take my word for it; ask the World Bank. A couple of years ago, disillusioned former members of ISIS gave Western investigators some 22,000 internal ISIS documents. The records included biographical information about 4,000 foreigners who have joined the terrorist group in 2013 and 2014. The World Bank assigned a team of experts to analyze the data.
The World Bank's final report made it clear that poverty was not the issue: "Daesh [ISIS] did not recruit its foreign workforce among the poor and less educated, but rather the opposite. ... This result is consistent with a number of other studies that come to a similar conclusion: poverty is not a driver of radicalization into violent extremism."
The report also found that ISIS terrorists are often highly educated: "These individuals are far from being uneducated or illiterate ... 69% of recruits report at least a secondary education ... a large fraction have gone on to study at university. Only 15% left school before high school and less than 2% are illiterate."

Not only that, but ISIS killers are even more educated than their neighbors: "Foreign recruits from the Middle East, North Africa and South and East Asia are significantly more educated than what is typical in their region."
And very few of them are unemployed:  "The vast majority ... of Daesh [ISIS] recruits from Africa, South and East Asia and the Middle East ... declared having an occupation before joining the organization."
Advocates of Palestinian statehood promote the poverty-causes-terrorism myth because it advances their agenda. It's the theory of "give them stuff, and all will be well." In Israel's case, it's "give them money, give them Israeli territory, give them a state."
Myths die hard. But the evidence is overwhelming that poverty is not what causes Muslims--whether Palestinian or Sri Lankan--to become terrorists. It's time to acknowledge the real causes of Arab and Muslim terrorism: radical Islam, Arab nationalist supremacy, and, of course, old-fashioned anti-Semitism.
Originally published at JNS.org - reposted with permission.