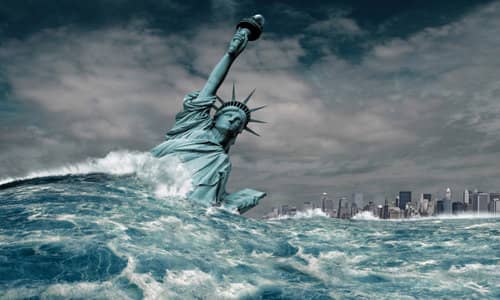 By Michael Snyder/Economic Collapse Blog May 02, 2019
Share this article:
As the National Weather Service tested its tsunami alert system on Monday, at least one coastal community in New Jersey thought the threat was real.
The National Tsunami Warning Center issued the test tsunami warning at 1:06 p.m. Eastern time. The message was labeled "TSUNAMI WARNING" and included the disclaimers "TEST...Tsunami Message Number 1...TEST" and "...THIS_MESSAGE_IS_FOR_TEST_PURPOSES_ONLY..."
But the Harvey Cedars Police Department on Long Beach Island retransmitted the alert as if the danger from an approaching tsunami was real.

At 1:28 p.m., the department sent a Nixle alert to its subscribers containing the NWS test message and the comment "Tsunami Warning until 02:06PM." That message was also cross-posted to the department's Facebook and Twitter feeds.
Four minutes later, the department followed up with "DISREGARD!!"
The warning, however, reminds us of the potential danger and impact a real Tsunami could have with 39 percent of all Americans living in a county that directly borders a shoreline.
Earlier today I was scrolling through my Facebook feed, and I came across a video entitled "What If A Mega-Tsunami Hit The United States".
If you know me well, then you probably know that this is a hot button issue for me, and so it definitely got my attention.
And it must be a hot button issue for a lot of other people as well, because it has already been viewed more than 3.5 million times.
I did some digging around, and I found an accompanying article for the video.  According to that article, someday a wall of water 3000 feet high could come racing toward us at 620 miles per hour...
In six hours, you, your government, and 124 million other people across 14 states will be tested by the greatest disaster to ever hit the U.S. East Coast. A great wave, 1000 meters tall (3280 ft.), moving towards you at 1000 km/h (620 mph), and that's only the beginning.
Boston, New York, Philly, D.C., Miami. All underwater. And you?
Of course the size of the tsunami would all depend upon the size of the event that caused it.

According to scientists at the University of California at Santa Cruz, if a giant meteor suddenly slammed into the Atlantic Ocean it could potentially create a tsunami with a wall of water as high as 400 feet...
If an asteroid crashes into the Earth, it is likely to splash down somewhere in the oceans that cover 70 percent of the planet's surface. Huge tsunami waves, spreading out from the impact site like the ripples from a rock tossed into a pond, would inundate heavily populated coastal areas.
A computer simulation of an asteroid impact tsunami developed by scientists at the University of California, Santa Cruz, shows waves as high as 400 feet sweeping onto the Atlantic Coast of the United States.
Either way, we are talking about death and destruction on a scale that is hard to imagine.
Once a meteor hit, there would be a race against time to get away from the massive wall of water rapidly approaching the east coast.  The creators of the Facebook video that I just mentioned envision that everyone would have "6 hours of advance notice"...
The death toll would be staggering; the economic impact, easily costing billions, if not trillions of dollars. It will take decades to rebuild, and yet, is it wrong to suggest that we might've gotten off easy?
How much worse would it have been without the 6 hours of advance notice? That's right, you owe a big thank you to these supersmart buoys monitoring the coast, keeping you safe and dry, so that you can rest easy, and keep watching 'What If.'
Sadly, the truth is that we would probably get very little warning.  For example, if a giant meteor were to splash down near Puerto Rico, the amount of time before impact would be extremely limited.  You could try to get in your car and outrace the wall of water coming at you at 620 miles per hour, but of course the highways would be jammed with other people trying to get out as well.
In a worst case scenario, tens of millions of people would die, and all of our east coast cities would essentially be destroyed.

You may not spend much time thinking about such a thing, but I find it very interesting that NASA is currently simulating a similar scenario...
NASA is going to be using a simulation of an "asteroid apocalypse" in order to help the space agency prepare for the cataclysmic event. And they are taking it seriously, as disaster planners from FEMA will join NASA for a dress rehearsal of doomsday.
International partners, including the European Space Agency (ESA), will also be a part of the simulation. The drill is said to be a "tabletop exercise" that will simulate just how a planetary asteroid emergency would play out in real time.
And NASA has good reason to be concerned, because our planet is apparently "in the midst of an epic asteroid surge"...
NASA's been running these simulations for years, and with good reason: Earth, as it happens, is in the midst of an epic asteroid surge compared to the relative peace and quiet the planet experienced many millions of years ago.
When unexpected space rocks do appear on our scopes, sometimes we only get hours' notice of their existence before they streak past. While the chances of a catastrophic impact are exceedingly slim, we're nonetheless unprepared for surprise asteroid strikes, which is why NASA is continually working on plans to help improve our NEO detection and mitigation capabilities.
We truly do live in very strange times, and they are going to get a whole lot stranger.
A single moment in time can change everything.  Most people assume that NASA knows about all of the big rocks that could potentially slam into our planet, but that is not true at all.
According to one estimate, approximately 17,000 large near-Earth objects remain undetected.  But since they are "undetected", the truth is that nobody knows the real number.
Meteors go whizzing by us all the time, and NASA doesn't discover a lot of them until they are already past us.
In Revelation 8, we are told the second trumpet brings about what seems to be a meteor, comet, or other heavenly body hitting the oceans and causing the death of one-third of the world's sea life.
More than likely this will cause a tsunami the likes of which the world has never seen in addition to poisoning the water in such a way that it is referred to as "Wormwood".
The word "wormwood" is mentioned only here in the New Testament, but it appears eight times in the Old Testament, each time associated with bitterness, poison and death.