Why Time Magazine And The Left Love Pete Buttigieg 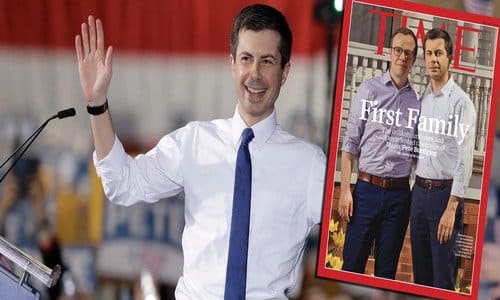 By Michael Brown/AskDrBrown.org May 09, 2019
Share this article:
Did you see the front cover of Time? It features a picture of Mayor Pete Buttigieg and his "husband," with the caption, "First Family." Why this exaltation of a fairly obscure, outlying political figure?
Could it be that he's a white male?
If anything, that would be a disqualifying factor for a Democratic presidential candidate today, even though Joe Biden and Bernie Sanders are still frontrunners.
Could it be that he is young (just 37 years old)?
So are Beto O'Rourke (46), Tim Ryan (45), Andrew Wang (44), Julián Castro (44), Wayne Bessam (44), Seth Moulton (40), Eric Swalwell (38), and Tulsi Gabbard (37).

Could it be his policies?
Nope. Do we even know his policies? How much has he articulated so far? What are the Buttigieg distinctives?
Could it be his political experience?
Hardly. Although he's been in politics over half of his life, he's a still a newbie on the national scene, and rather than being a governor or a senator, he's the mayor of only the fourth largest city in Indiana.
Could it be that he was elected by a large percentage in what had been a Republican stronghold?
That's certainly a factor, but it can hardly be the driving factor. That's why the Time article was titled, "Mayor Pete Buttigieg's Unlikely, Untested, Unprecedented Presidential Campaign.
That really says it all: unlikely, untested, and unprecedented.
How then has he surged up in the polls? Why has he become the darling of the left?
It's because he is gay. And he is "married" to his partner. And he is a professing Christian. And he is challenging sacred biblical and church traditions. What more could the left ask for?
But there's a nuance to this that we cannot miss.
Mayor Pete and his partner are the perfect poster boys for the gay activist agenda, a culmination of years of messaging and marketing.
They seem like really nice guys (and might well be).
They seem wholesome.
They are church going.
They care about the poor.
To the best of our knowledge, they are not frequenting gay bars looking for anonymous sex encounters.
They are like your ideal neighbors, just a little different.
That's the message that Time is sending to its readers.
It's time to redefine family! It's time for America as a whole to embrace gay marriage! The old era is past! May it never raise its ugly, bigoted head again!

Lest you think I'm exaggerating, let me remind you of one of the well-known gay strategies from the late 1980s as articulated by Marshall Kirk and Hunter Madsen in their bestselling book After the Ball: How America Will Conquer Its Fear and Hatred of Gays in the 90's.
They called for the "conversion of the average American's emotions, mind, and will, through a planned psychological attack, in the form of propaganda fed to the nation via the media." (Yes, these activists had a plan, and they carried it out to a tee.)
They explained that "to desensitize straights to gays and gayness, inundate them in a continuous flood of gay-related advertising, presented in the least offensive fashion possible. If straights can't shut off the shower, they may at least eventually get used to being wet."
And, they noted, "The main thing is to talk about gayness until the issue becomes thoroughly tiresome. . . . If you can get [straights] to think homosexuality is just another thing - meriting no more than a shrug of the shoulders - then your battle for legal and social rights is virtually won."
This part of the strategy was called "Desensitize."
The next part was called, "Jam," by which they meant smearing anyone who disagrees with the homosexual agenda. Associate them with Nazis and the KKK and hysterical backwoods preachers. Anyone who opposes gay activism is a bigot and a hater!
Then, finally, the last part of the strategy was "Convert."
How was this done?
They wrote, "In Conversion, the bigot, who holds a very negative stereotypic picture, is repeatedly exposed to literal picture/label pairs, in magazines, and on billboards and TV, of gays - explicitly labeled as such! - who not only don't look like his picture of a homosexual, but are carefully selected to look either like the bigot and his friends, or like any one of his other stereotypes of all-right guys - the kind of people he already likes and admires."

Yes, "The image must be that of an icon of normality - a good beginning would be to take a long look at Coors beer and Three Musketeers candy commercials. Subsequent ads can branch out from that solid basis to include really adorable athletic teenagers, kindly grandmothers, avuncular policemen, ad infinitem."
Americans must be bombarded with a new image of normal, one which included same-sex couples, one in which having two moms or two dads was exactly the same as (or even better than!) having a mom and a dad.
As for negative aspects of homosexuality (such as higher rates of promiscuity and STD's or "open" marriages), those should be hidden from the public eye.
And so it is that today, in 2019, Time wants to take things one step further, with Mayor Pete and Chasten serving as the perfect representatives of where America should go. The nation has been desensitized; the nation has been jammed; it's time for the national conversion. Straight out of the pages of Kirk and Madsen! Meet the new First Family!
Originally published at AskDrBrown.org - reposted with permission.