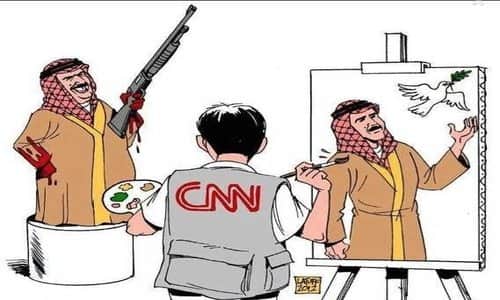 By Jackson Richman/JNS.org May 10, 2019
Share this article:
While Israel absorbed as many as 700 rockets fired by the terrorist groups Hamas and Islamic Jihad from the Gaza Strip last week, the media turned the tables on the aggression and launched its usual assault on the Jewish state.
"It's Israel against Palestinian terrorists, so we always know which side the American media will take--the 'terrorists,' " Dan Gainor, vice president of business and culture at the Media Research Center, a media watchdog group, told JNS. "Except they won't ever call them that. Fire 700 rockets indiscriminately trying to kill men, women and children, and the press labels you a 'militant,' as long as they support your cause."

Gainor cited a "usual list of errors and fallacies--like how Gaza is 'occupied' or 'surrounded'--neither of which is true. Israel pulled out of Gaza more than a decade ago and it was rewarded by the creation of a terror state."
Israel withdrew from the Gaza Strip in 2005.
One straightforward headline in The New York Times in the past few days, "Gaza Militants Fire 250 Rockets, and Israel Responds With Airstrikes," was attacked by Yousef Munayyer, executive director of the U.S. Campaign for Palestinian Rights, as "a stunningly irresponsible and misleading headline." His complaint? That it wasn't slanted in favor of the Palestinians.
That's how uneven the playing field has become.
"When will the world stop dehumanizing our Palestinian people who just want to be free? Headlines like this & framing it in this way just feeds into the continued lack of responsibility on Israel who unjustly oppress & target Palestinian children and families. #FreePalestine," tweeted U.S. Rep. Rashida Tlaib.

However, Sean Durns, senior research analyst at the Committee for Accuracy in Middle East Reporting in America, told JNS, "Several major Western media outlets have offered poor and biased coverage of the latest terrorist attacks targeting Israel. Several outlets failed to make clear to readers that Israel's actions were a response to terrorists launching an unprecedented number of rockets into Israeli territory."
He cited The Wall Street Journal, which published a story with the headline "Israel and Gaza Trade Deadly Attacks," providing "readers false equivalency between the actions of a U.S.-designated terror group that targets Israeli civilians and uses human shields as cover--a double war-crime--and the Jewish state, which utilizes the Iron Dome defense system, targeted strikes and roof knocking, to minimize casualties."
Durns added, "For its part, The Washington Post, CNN and others have continued to treat the Hamas-controlled Gazan Health Ministry as a credible source."
Simon Plosker, managing editor for HonestReporting, a non-governmental organization that monitors anti-Israel media bias, told JNS that while the reporting on the conflict this time around was improved because four Israeli civilians were killed, leading to sympathy from the press, the coverage "also demonstrated the media's consistently simplistic usage of casualty figures as a moral barometer," citing the media expression "if it bleeds, it leads."

"A number of British media outlets such as Sky News, ITV News and The Independent chose to lead with stories and headlines accusing Israel of killing a pregnant Palestinian woman and a baby," said Plosker. "Aside from the deliberate intention to portray Israel as a murderous aggressor, in many cases the IDF's denial of involvement and claim that a misfiring Hamas rocket was responsible wasn't even deemed worthy of mention."
"The media have a duty to report that the Palestinian claim was disputed by Israel. Anything less is a significant professional failure," he continued. "Whether journalists believe the IDF's statements or not, the media have a duty to report the story fully. Telling one side alone is willfully naive at best, and a worrying betrayal of the truth at worst."
Islamic Jihad later admitted that the pregnant woman and a 14-month-old baby died as a result of one of it's own dysfunctional rockets that exploded in the family's home, not from the IDF.
Originally published at JNS.org - reposted with permission.