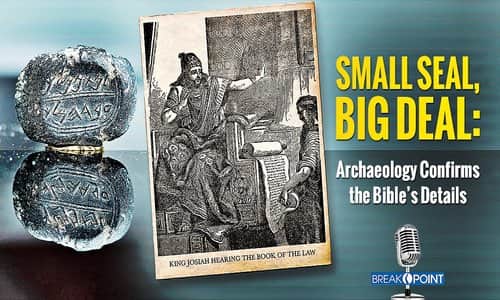 By John Stonestreet/Breakpoint.org May 10, 2019
Share this article:
No one names their son Jehoahaz. It's just too tough to pronounce. On the other hand, most of us know a Josiah or two. Not only is it a much more pronounceable name, but as we read in 2 Kings chapter 22, "Josiah was eight years old when he became king, and he reigned in Jerusalem thirty-one years ... He did what was right in the eyes of the Lord and followed completely the ways of his father David, not turning aside to the right or to the left."
See, King Josiah stands out among Judah's final monarchs. Not only did he refuse to take part in idol worship, he tore down the high places and the Asherah poles, and he reinstated the worship and feasts of the true God.

According to the Bible, Josiah did all this because of a discovery in the Temple of a scroll of the Law, which had long been neglected and forgotten. He wept over Judah's disobedience and recommitted his kingdom and people to the covenant recorded in that scroll. As a result, God promised that the judgment He would eventually send would not occur during Josiah's lifetime.
A much more recent discovery brought this particular section of 2 Kings to light even more. The Times of Israel recently described two tiny objects unearthed at a dig in the City of David: an agate stone and a lump of burnt clay that both had Hebrew inscriptions which were the names of two individuals--"Ikkar son of Matanyahu"--and "Nathan-Melech, Servant of the King." Whoever can tell me which one of those two names appears in Scripture deserves this week's Bible trivia award.
These were seals, you see--the kind once pressed into wax or dipped into ink to sign letters. According to Yiftah Shalev of the Israel Antiquities Authority, where these seals were found sets the 2,600-year-old signets apart for archaeologists. They were discovered in the remains of what was likely an administrative building dating to the 8th century B.C.

Many such artifacts hit the antiquities market, but often no one is really sure where they come from. These, however, were found in "their true archaeological context."
The name that astute students of Scripture might recognize, by the way, is Nathan-Melech, an official who gets just a passing mention in 2 Kings 23:11, just as Josiah is purging Jerusalem of the trappings of idolatry. Outside of the Bible, this tiny clay seal is the first confirmation of this man's existence.
And to be clear, it's the obscurity of his name--both in recorded history and in Scripture--that should amaze us.
In biblical archaeology, it's often the big players we look for--Moses and David and Paul. Last year's announcement of a ring bearing Pontius Pilate's name was big news, and rightly so. It's a name we say every time we recite the Apostles' Creed, proclaiming that Jesus' redeeming work happened in real history.
Still, names like Nathan-Melech, Servant of the King, may offer an even stronger confirmation that the events recorded in the Bible actually happened. The seemingly insignificant name from 2 Kings reminds us that King Josiah, who rediscovered the Law in the Temple and cleansed the nation of idols, isn't just a character from a mythical story.

He was a man in history; he had court officials and administrative headquarters; and he was part of the lineage that led to another King--the Lion Who sits on the throne of Judah and is ushering in a Kingdom--one that, unlike ancient Jerusalem--will never be conquered.
Of course, we don't believe this big story just because someone unearthed a piece of clay with an obscure name on it. But it is exciting to see how even the smallest details in Scripture can hold up under the digging and the scrutiny.
Originally published at Breakpoint.org - reposted with permission.