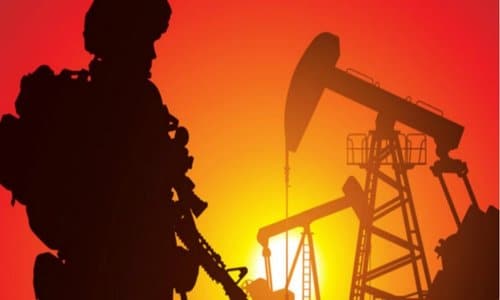 By Yaakov Lappin/JNS.org May 15, 2019
Share this article:
Recent developments in the Persian Gulf demonstrate that Iran has taken a strategic decision to respond to escalating U.S. financial and diplomatic pressure against it by threatening the ability of Arab Sunni states—bitter rivals of Iran and allies of America—to export oil to the world.
The message from the Islamic Republic to the Trump administration is clear: If Iran won’t be able to export its oil, neither will its Arab Sunni neighbors—and so the entire global market is at risk of disruption and destabilization.

This is a direct response to the ever-tightening sanctions being placed on Tehran by Washington. Recent U.S. steps include Trump’s decision in April to cancel sanction waivers to eight countries that purchase Iranian oil. In recent days, the United States imposed new sanctions on Iranian industrial metals.
Last month, the State Department classified its Islamic Republican Guards Corps (IRGC)—a major player in Iran’s regional power projection, terrorism network and inside Iran’s economy—as a terrorist organization. The latter move is one that some in the American defense establishment assessed could result in retribution.
The decision by Iran to retaliate and extract “a price” for these moves must have been approved by Iranian Supreme Leader Ayatollah Khamenei. It has already been translated into action on the ground, with two attacks on oil sites in recent days.
The first occurred the UAE, in which four commercial ships were damaged in sabotage attacks by an oil-tanker hub near the Straits of Hormuz—a major international oil-shipping artery that Iran has threatened in the past. The second attack took place in Saudi Arabia on Tuesday, targeting oil facilities near the Saudi capital of Riyadh with explosive drones.
It is safe to assume that the IRGC is behind both attacks, even if its role in the second incident was limited to passing on instructions to the Iranian-backed Houthi organization in Yemen to launch the drones.

Iran maintains a large network of terrorist, heavily armed proxies throughout the region, giving it the ability of hitting targets while maintaining a facade of plausible deniability.
Its targeting of these sites is no coincidence, as Tehran is particularly enraged by statements from Saudi Arabia pledging to keep the oil-production market steady to make up for the drastic reduction in Iran’s oil exports.
On April 24, Iranian President Hassan Rouhani stated that Saudi Arabia and the United Arab Emirates “owed their existence to Iran” because the Iranians had refused to help former Iraqi dictator Saddam Hussein invade the two countries. The speech was part of a rebuke of those Gulf states for their willingness to assist the American sanctions. It appears as if the rebuke did not end at the rhetorical level.
Tehran pushes back in calculated approach
Iran’s actions are not limited to escalating the security situation in the Gulf.
It has also imposed an ultimatum on the European Union, giving it 60 days to rescue the 2015 nuclear deal. Iran is demanding that Europe come through on financial mechanisms that would allow it to bypass American oil and banking sanctions.
To make it clear that it is serious, the Islamic Republic declared that it would stop observing limits for stockpiling low-enriched uranium, which the nuclear deal limits to 300 kilograms, and its heavy water (which can be used to produce plutonium). Tehran said the nuclear agreement allows it to take these steps if other members of the deal exit it, as the United States had done in May 2018.
Iran is threatening, in essence, to walk away from the nuclear deal if the Europeans cannot shield it from Trump’s sanctions. So far, the E.U.’s leaders have made due with calling on Iran to refrain from any dangerous steps.

Ultimately, Iran is so far telling the United States that it will not succumb to pressure tactics designed to get it back to the negotiating table, which is Trump’s openly stated goal. Washington wants to drag Iran back to talks in order to come up with a better nuclear deal, as well as address Iran’s destructive, aggressive conduct throughout the Middle East.
This approach was summed up last year by U.S. Secretary of State Mike Pompeo and his 12 demands of Iran, which include ending support for its network of terrorist proxies and an end to its ballistic-missile program.
The Iranians are signaling that they have no intention of going down that route, even if Pompeo’s demands represent an “opening position” in Trump’s bargaining tactics.
Meanwhile, America is flexing its own military muscle, both through the mobilization of a carrier strike group to the region and through media reports. This includes Monday’s New York Times report, describing how Trump’s security team are weighing the sending of a massive U.S. force of 120,000 soldiers, backed by air and naval firepower assets, should Iran resume its nuclear program or attack U.S. forces in Iraq, Syria or at sea.
At this stage, Iran appears to be pursuing a calculated and phased approach, which is limited to sending warnings. But it is a dangerous new development in the standoff with Iran, which is prone to miscalculations and rapid escalations, even if they are unintended.
With no one blinking at this stage, Israel will need to be on high alert for Iranian proxy attacks on it. Whether from Syria or Lebanon—where Iran has built an armed force that has more firepower than most militaries in the world—or in Gaza, Iran has the ability to drag Israel into the fray should the situation escalate further.
Originally published at JNS.org - reposted with permission.