Why Is An Episcopal Church Hosting Islamic Anti-Israel BDS Speakers 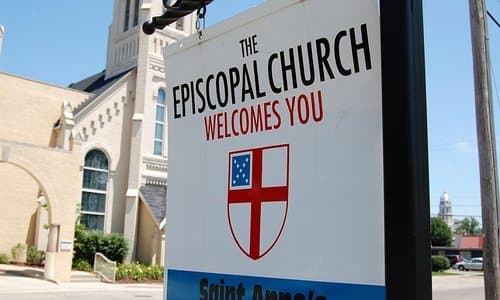 By Melissa Landa/Algemeiner.com May 17, 2019
Share this article:
On Tuesday May 14, Redeemer Episcopal Church in Astoria, Queens hosted an event called "Palestinian Expulsion and Resistance: The Nakba, BDS, and the Great Return March." The scheduled speakers include BDS leaders Raja Abdulhaq, the executive director of Majlis Ash-Shura Islamic Leadership Council of New York, and Nerdeen Kiswani, founder and chair of Within our Lifetime United for Palestine.
Given that the Episcopal Church voted against BDS at its General Convention last July, the Redeemer Church's promotion of the BDS campaign raises serious questions. The Church's opposition to BDS was clearly articulated by many at the Convention, including by retired bishop Ed Little from the Episcopal Diocese of Northern Indiana who said, "Divestment will not move us one inch forward in the peace process. It will not bring an end to the occupation. It will not lead us to the solution that we all yearn for, which is two states living side by side in peace within secure borders."

Little continued, "All it [BDS] does is make us advocates for one side in the conflict and remove us from our role as peacemakers." Indeed, as reported by William Murchison in The American Spectator, "at General Convention, they affirmed, formalistically, Israel's right to exist within secure borders."
In addition to my questions about this event given the Church's opposition to BDS, I share the more visceral alarm of Astoria's Jewish community because of the invited speakers. Abdulhaq and Kiswani are well-known for legitimizing terrorist attacks against Israeli civilians, refusing to dialogue with anyone who supports Israel, and disrupting meetings of the New York City Council during their discussions about Israel.
Abdulhaq has stated that he considers any Muslim organization that organizes an interfaith event with a "Zionist" counterpart to be a "betrayal to your brothers in sisters in Palestine, Lebanon, Syria, Egypt, and other countries."
He supports "armed resistance" against Israel, which he has described as a "terrorist state" that engages in "mass murder." Alluding to the Second Intifada of the early 2000s, when Palestinian terrorists killed over one thousand Israeli civilians -- including families celebrating their Passover Seders-- Kiswani has called for an "intifada revolution."

I also share the objections expressed by the Jewish community of Astoria regarding the responses they have received from the event's organizers. Caleb Dejong, who is a member of the board of the church, informed Mr. Zelig Krymko-Shmuelovich that his "opinions won't be welcome at this event" and "saying controversial things about Palestine won't be tolerated."
Given the hundreds of missiles recently fired into Israel by Hamas, the death of several innocent Israelis, and the increased antisemitism in New York City, in conjunction with his choice of speakers, Mr. Dejong hardly embodies the values of the Episcopal Church, which states, "We have a legacy of inclusion, aspiring to tell and exemplify God's love for every human being."
As co-founder and Executive Director of Alliance for Israel, I urge Mr. Dejong and the Redeemer Episcopal Church to recognize that it has been a mere two weeks since an American terrorist opened fire on Jewish men, women, and children while they celebrated Passover in their synagogue in Poway, California, and that the shooter's manifesto attacked President Trump as "that Zionist, Jew-loving, anti-White, traitorous [expletive]."
I also ask them to remember that Noya Dahan, the little girl in California who was injured by shrapnel, and her uncle who shielded her, are Israelis, and that Noya's parents brought her to the United States to escape the missiles being fired by Hamas into their small Israeli community, including one that landed on their house -- attacks that Abdulhaq and Kiswani justified and celebrated.
In conclusion, it is important to note that despite the Church's rejection of BDS, leaders of the anti-Israel campaign have falsely claimed it did not do so. In fact, the anti-Israel media outlet Mondoweiss blatantly lied when it wrote, "The Episcopal Church voted ... at its general convention in Austin, Texas to divest from companies involved in Israel's human violations against Palestine."

Jeffrey Walton expressed the misrepresentation best: "Did the Episcopal Church implement a policy of anti-Israel divestment at its recent General Convention? No, but Boycott, Divestment and Sanctions (BDS) advocates would like you to think that they did."
Similarly, perhaps Caleb Dejong would like you to think that Raja Abdulhaq and Nerdeen Kiswani are righteous representatives of the Palestinian people who are simply calling for their liberation. They are not. They are advocates of terror against innocent Israeli children like Noya Dahan.
And while they are certainly free to express their genocidal views on the streets of New York City, as they have done in the past, Redeemer Episcopal Church was under no obligation to provide them with another platform to spread their hate. Redeemer Episcopal Church has chosen to offer them a platform and by doing so, must assume responsibility for violent attacks against innocent Jews in Astoria that are likely to follow.
Alliance for Israel has shared its concern with the leadership of the Episcopal Church and I urge readers to do the same. Antisemitic hate crimes are soaring in New York City. What is needed is community gatherings that foster dialogue, not gatherings that call for more violence and hate.
Originally published at Algemeiner.com - reposted with permission.