Transgender Identity May Have Cost A Baby Its Life 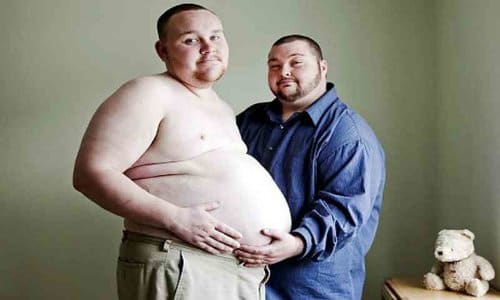 When it comes to checking into a hospital, how you identify does not matter. What matters is your biology.
Strokes affect women differently than men.
Women and men metabolize certain drugs differently.
That's why a health care worker told me last year that, when it comes to filling out medical forms for incoming patients, if she recognizes the person's biological sex is different than their gender identity, she fills out the form according to the facts.
Yes, she acknowledged, it was against the hospital's guidelines. But she felt responsible to help save the patient's life. Thinking you're treating a man when you're really treating a woman could be deadly.
A Deadly Outcome
Recently, it was deadly. Only not for the woman. Instead, it was deadly for her baby.
The problem is that the doctors thought the patient in question was an obese male having stomach pains. "He" identified as male and "his" electronic paperwork said "he" was male.
Only "he" wasn't. "He" was a pregnant woman.

And "he" wasn't having stomach pains. "He" was losing "his" baby. (From here on, I'll drop the scare quotes and revert to reality, referring to this mother as a she.)
As reported on the Gateway Pundit, "A pregnant woman living as a transgender male arrived to a hospital with severe abdominal pains and nurses didn't immediately consider it an emergency because she appeared to be an obese man who stopped taking blood pressure medication."
Had the hospital realized what was going on, they might have been able to save the baby. Instead, a child is dead.
A Medical Journal's Analysis
As noted by the authors of a case study in The New England Journal of Medicine, a woman showing up with similar symptoms "would almost surely have been triaged and evaluated more urgently for pregnancy-related problems."
Emergency rooms and hospitals, by their definition, deal with life and death situations every hour of every day. That's why it's imperative they have the right information when treating a patient.
Are you currently on medication? Are you allergic to any medication? What blood type are you?
The wrong answer could literally mean the difference between life and death.
It's the same with biological realities.
If you think you're treating a male rather than a female, you might misdiagnose the situation.
In this case, the error may have resulted in losing a life that could have been saved.
Stubborn Facts
Unfortunately, for many, the takeaway from this tragic case will be: "We need to do a better job of training our health care workers so can they provide better care for transgender patients."
Indeed, the lead author of the study, Dr. Daphna Stroumsa of the University of Michigan, Ann Arbor, wrote that the patient "was rightly classified as a man" in the medical records and appears masculine. "But that classification threw us off from considering his actual medical needs."

Seriously? This is the opinion of a learned doctor, someone trained in medical realities? The transgender "classification threw us off from considering his [sic] actual medical needs"?
That would be like saying, "Because the patient identified as non-diabetic, we didn't catch the bleeding in time."
The fact is that biological realities, which include things like pregnancy, are not matters of opinion. Or perception. Or feeling. Or preference. They are stubborn facts.
That's why it behooves the medical profession to draw a line in the sand and say, "We care deeply about those who identify as transgender and we want to support them and help them, but when it comes to treating physical conditions, we focus only on biology."
A Matter of Life and Death
That is not bigotry. That is good medical practice. It's also compassion, since it's telling the patient, "The ultimate goal is that you get healthy."
And would it be too much for trans-identified patients to say, "I'm biologically male but identify as female"?
Let the hospitals make a note of it if they feel it's important to address the patient accordingly. That's their call. But let them not slide into the world of fantasy. Lives are literally at stake.
It's also compassion, since it's telling the patient, "The ultimate goal is that you get healthy."
Unfortunately, Mexico has now ruled that new birth certificates "must be issued after sex reassignment surgery," joining other countries with similar laws and further overthrowing biological realities. (Perhaps you can go back in time and change the date on your birth certificate if you feel younger or older? Where do we draw the line, especially if we have had cosmetic surgery to change our appearance? Why not change our birthdate too?)
"The Correct Physiological Classification"
On the other hand, in a positive step towards reality, a male weightlifter, who identified as female, was stripped of his world records after it was discovered that she was he.
"Our rules, and the basis of separating genders for competition, are based on physiological classification rather than identification," the Raw Powerlifting Federation said in a statement.
"On the basis of all information presented to the board of directors for this particular case, the conclusion made is that the correct physiological classification is male."
Would that hospitals and doctors would have as much common sense.
To say it again: This is a matter of life and death.
Originally published at AskDrBrown.org - reposted with permission.