'Born This Way' - The Zombie Arguments that Just Won't Die 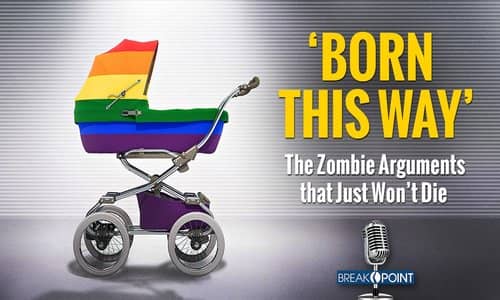 By John Stonestreet/Breakpoint.org May 22, 2019
Share this article:
Around the Colson Center we often talk about "zombie arguments," ideas that--like the undead so popular on television--just keep getting up and shambling around, no matter how many times you kill them.
For example, there are zombie arguments about abortion--like the one that says the pre-born aren't really human. There are also quite a few zombie arguments in favor of same-sex relationships. Often, they're arguments that ran their course, outlived their usefulness in secular circles years ago, but now enjoy a kind of second life, often among self-identified Christians who want to go along with the culture.

I'm talking about arguments like, "Jesus never said anything about homosexuality," or "How does my gay marriage hurt you?" and of course, "I was born this way."
That last one showed up in my inbox recently. A gentleman who had attended a talk I gave wrote to tell me how disappointed he was in what he called my "misinformation" about homosexuality. He said (incorrectly) that in the book that I co-authored with Sean McDowell on this topic, we claimed that being gay is a choice, and that the lack of any identified "gay gene" proves this. "...there is no gene for diabetes," he wrote, "and yet it happens. There is no doubt that the LGBT community is born that way. And since God makes no mistakes," he continued, "the LGBT community is God-created just like us straight folks."
I wrote back to correct his misunderstanding. Nowhere in the book did Sean or I claim that the apparent lack of a "gay gene" proves that homosexuality is purely a choice, or purely environmental. In fact, I've never made that claim in any book. Rather, I argue that same-sex orientation probably results from a combination of both environmental and biological factors.

The best research is on my side here. No expert on this topic--not even those who approve of same-sex relationships--dismisses environmental factors completely. Evidence such as identical twins who are raised separately, but who don't both identify as gay is just too strong an indicator that nurture must play a role.
I added that leaders in the LGBT movement have long known that the "born this way" argument is bogus. All the way back in 1989, the authors of After the Ball--a sort of manifesto and game plan for the gay rights movement--admitted this. They wrote that "sexual orientation, for most humans, seems to be the product of a complex interaction between innate predispositions and environmental factors..."
But, they concluded, the public should be led to believe the "born this way" argument, because it's so useful for creating sympathy and pro-gay policy. Plus, it's incredibly easy to make.
Nowadays, the LGB movement has largely retired the "born this way" argument to make way for the "T"--transgender identity. So in place of "I was born this way and I can't change," we now hear "I was born this way, it was wrong, and I want to change."
In fact these days, the "born this way" argument almost always comes from self-identified Christians who are trying to convince us that homosexuality is compatible with our faith. I think especially of the comments of Mayor Pete Buttigieg that God made him gay and anyone who disagrees has a quarrel with the Maker.
My response is simple, and I've given it countless times: Even if there is a biological impulse toward a certain kind of behavior, that doesn't make it right to act on the impulse.

Science tells us of all kinds of biological impulses for behaviors that are harmful, like depression, extreme anger and violence, anorexia, even pedophilia. And of course, biological impulses don't alter the very clear biblical condemnations of homosexual behavior.
Sadly, the gentleman ended our email discussion with another zombie argument: that the only reason I hold the position I do is because of homophobia and disgust toward gay people.
That's just not the case. The clear teaching of Scripture, natural law, Christian tradition, and even scientific evidence leads me to reject same-sex behavior, while still loving and seeking the best for those engaged in it. And that will remain true, no matter how many times these zombie arguments shamble into my inbox.
Originally published at Breakpoint.org - reposted with permission.