What Progressives Actually Mean By "Tolerance" 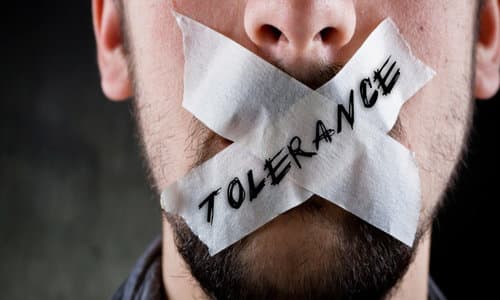 What I often wonder, though, is why "tolerance" is trumpeted as such a virtue, considering that Christianity makes a far more radical demand. Christianity doesn't demand "tolerance" for others. It demands that we love our neighbor, love our enemy, and forgive those who hurt us.
Tolerance is a weak imitation of love. It implies that your heart can still throb with hate for someone, but as long as you don't say anything out loud, and as long as you tolerate that person's presence and veil your contempt, that's cool.
Tolerance implies utter detachment from the wellbeing of those around you, and total disregard for their well-being. It's confusing that progressive activists get so much mileage out of lauding tolerance when in reality, it is a huge step down from the love that Christianity demands.
But the truth is that the progressives don't really want people to adhere to the Christian standard of loving your neighbors rather than simply tolerating them. Christians have always said that we are commanded to hate the sin and love the sinner.
In other words, hate actions that have devastating spiritual consequences in order to love the person--to the extent of warning him against behaviors that will hurt him. As others have written, the reason the gay rights movement began to refer to homosexuality as a description of someone's fixed orientation rather than a lifestyle consisting of certain actions was to dodge the conundrum of "love the sinner, hate the sin."

After all, how could they claim Christians were hateful when to the contrary, Christians were willing to readily say that not only did they love people they disagreed with, but that they were commanded to?
What the progressives actually mean when they talk about toleration is not that we should tolerate people. As I said, Christians already had a far more rigorous demand written right in the Scriptures. What they mean is that we must tolerate and accept, without any social disapproval or verbal disagreement, behaviors that conflict with Christian teaching and that we believe will be genuinely harmful.
Thus, opposing gay marriage is "homophobic." Disapproving of promiscuity is "slut-shaming." Pointing out that abortion kills children is "misogynist." Progressives conflate behaviors with people, and then demand that we stop condemning certain behaviors because that is hateful to the people practicing those behaviors. See what they did there?
Christians have not always succeeded in following the commands laid out in Scripture, and so it can be easy for progressives to find inconsistencies and failures and then triumphantly point out that Christians can be hypocrites. This accusation is ironic, because that is obviously true. The reason the Crucifixion took place is because people are sinners and need a Saviour.
There is no such thing as a perfect Christian, and so there is no such thing as a Christian who never sins. But the point here is that the standard laid out in Christianity--the radical command to love our neighbor--is far superior to the anemic and pathetic counterfeit laid out by the progressives--that we must tolerate our neighbor.

It is of course essential that Christians strive to avoid hypocrisy, especially in a time where hypocrisies are used to tar all of Christianity and paint it as a hateful and intolerant faith. Where there is genuine hate towards members of the gay community, it must be called out and condemned as sin--but not because it violates a progressive standard of "tolerance," but because it violates the Christian command to love our neighbors as ourselves.
It is true that our culture finds it hard to understand that in order to truly love someone, you must be willing to condemn sinful behaviors that will harm them, but that does not excuse us from obeying this command. We must recognize those around us as men and women created in God's image with souls of infinite value.
Loving our neighbor means not ostracizing or exiling those members of Christian communities who may struggle with their sexuality. It means reaching out in compassion--not because our culture preaches tolerance, but because Christianity preaches love.
Originally published at The Bridgehead - reposted with permission.