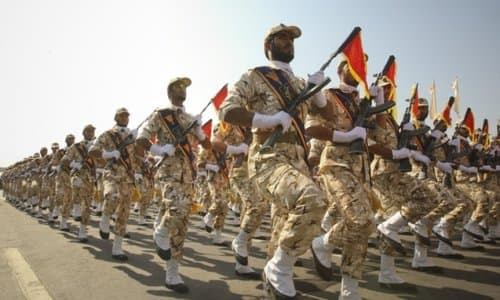 By Ruthie Blum/JNS.org May 22, 2019
Share this article:
Sunday night's landing of a Katyusha rocket less than half a mile from the U.S. Embassy in Baghdad was not merely the latest provocation on the part of Tehran in its battle of wills with Washington. More importantly, it verified Israeli intelligence revealing stockpiles of Iranian ballistic missiles in Iraq, poised to strike American targets.
It also vindicated the dispatch of U.S. warships and fighter jets to the Persian Gulf, and the State Department's order that all non-essential diplomatic personnel evacuate Iraq immediately.
The rocket attack, then, did not come as a total shock. Still, it came two weeks after U.S. Secretary of State Mike Pompeo suddenly canceled a trip to Germany and headed to Baghdad to warn Iraqi leaders about Iran's growing influence on their soil and threat to their sovereignty.

On Sunday, U.S. President Donald Trump made two statements that illustrate his administration's dilemma about when or whether to engage in actual battle with the Islamic Republic.
In the afternoon, he tweeted: "If Iran wants to fight, that will be the official end of Iran. Never threaten the United States again!"
Yet in an interview with Fox News that aired Sunday evening, he said, " ... They can't be threatening us ... and I'm not ... somebody that wants to go into war. ... I don't want to fight. But you do have situations like Iran. You can't let them have nuclear weapons--you just can't let that happen."
Iranian Foreign Minister Javad Zarif shot back at Trump on social media.
Alluding to U.S. National Security Adviser John Bolton and Israeli Prime Minister Benjamin Netanyahu--both of whom have been accused of trying to manipulate Trump into going to war, he tweeted: "Goaded by #B Team, @realdonaldTrump hopes to achieve what Alexander, Genghis & other aggressors failed to do. Iranians have stood tall for millennia while aggressors all gone. #EconomicTerrorism & genocidal taunts won't 'end Iran.' #NeverThreatenAnIranian. Try respect--it works!"
Iranian Supreme Leader Ayatollah Ali Khamenei, however, stated recently that "war is not in the offing. ... We do not want a war, and neither does the United States, which knows it does not stand to gain anything from a war. ... Iranian willpower is strong because Iran puts its trust in Allah. The boastful and bullying enemy has no real strength."

In spite of Iran's "bluster and bluff"--as Jonathan Tobin has called the regime's attempt to extricate itself from the corner of crippling sanctions into which Trump has forced it--Tehran clearly knows that it is no match for the might of the U.S. military. Its leaders also are aware, however, that Americans are never keen on going to war.
Especially when persuaded by propaganda that they are doing so in order to defend a third country. You know, like Israel, for instance, whose prime minister has been shouting about the global danger of a nuclear Iran for decades.
And that brings us to the real problem facing the Trump administration right now. While a full-scale war with Iran does not appear likely in the near future, low-intensity conflict against the West and its allies already is being waged by Iran's proxies all over the world.
Indeed, Iran-backed Shi'ite militias and terrorist organizations have been committing atrocities well beyond the Middle East. Israel has been on the front lines of this incessant guerilla onslaught, attempting simultaneously to fight off genocidal groups and individuals along its borders without launching a military offensive on an actual country.
Fending off Hamas in Gaza, Hezbollah in Lebanon and Islamic Revolutionary Guard Corps members in Syria, the only democracy in the region takes great care not to kill the civilians used by the terrorists ruling their governments (and living in their midst) as human shields and canon fodder.
In such asymmetric warfare, definitive victory is elusive, if not impossible.
Herein lies Iran's current advantage over the United States.

In an article on Friday in the pro-Hezbollah Lebanese daily, Al-Akhbaron--translated by the Middle East Media Research Institute--editor Ibrahim Al-Amin described Tehran's global tentacles as follows: "The Soviet leader of old, Josef Stalin, was once asked about the nature of the ties between the Soviet Union--the center of the communist movement--and other communist forces around the world.
He replied: 'We support and sponsor all the communist parties in the world. Each of us operates according to his status and circumstances. If any [communist] party experiences a crisis in its country, we will see how we can assist it and figure out the best course of action. [And] if we are in crisis, the communists around the world will no doubt come to the aid of the Soviet Union.' "
According to Al-Amin, Iran not only "possesses an arsenal that threatens the farthest edges of Western Europe, and can also destroy all the centers of influence in the Middle East," but has allies that will join it in war: a real army in Afghanistan; an influential force in Syria and Iraq; Hezbollah, a party with state-like powers; and vast capabilities in Yemen, as well as allies in Palestine and other parts of the Arab world who will feel the need to come to its aid ... "
The good news is that the Soviet Union was eventually defeated by the United States without a war. The bad news is that America did not achieve victory over the USSR until nearly 40 years after Stalin's death.
Let us hope that toppling the evil regime of the ayatollahs takes far less time--with or without troops on the ground or bombs from the air. Our lives depend on it.
Originally published at JNS.org - reposted with permission.