What Happens If Netanyahu Can't Form A Government? 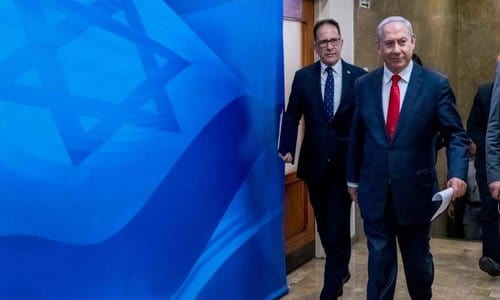 By JNS.org May 28, 2019
Share this article:
If Prime Minister Benjamin Netanyahu wants to stay on as premiere, he has to get the Knesset's approval for a newly formed government, in the form of a confidence vote.
Netanyahu has the support of 60 Knesset members out of 120, and the opposition has 55 MKs. The wild card is Israel Beiteinu, which has refused to join the coalition but considers itself right wing.
If Netanyahu presents a government and Israel Beiteinu abstains, he will win the confidence vote 60 to 55 and get to swear in a minority government. If Israel Beiteinu joins the opposition, the confidence vote will end in a tie and he will have to alert President Reuven Rivlin that he has failed to get the Knesset's approval, or alternatively dissolve the Knesset and call an early election.

What happens if Netanyahu misses the deadline to form a government?
If Netanyahu is unable to form a new coalition by Wednesday, he will have to inform President Rivlin that he is returning the mandate he was given.
The president will then have to task another MK to form a government, after consulting party leaders. Rivlin can choose anyone he thinks has a chance of successfully winning the Knesset's confidence, be they on the right or the left.
If the president's second choice for prime minister fails to form a coalition after 28 days, MKs can ask the president to tap another MK, who they believe has a good chance of forming a new government. He or she will only have 14 days to complete the task.
If this candidate fails as well, the Knesset will be dissolved and a new election will be held within 90 days.

Can Netanyahu call an early election?
The Likud has already said that it would ask the Knesset to vote on a bill to call an early election if Israel Beiteinu chairman Avigdor Lieberman doesn't join the coalition, although it is unclear if the such a bill would have a majority in the Knesset.
For a dissolution bill to be enacted, it needs to pass four readings and be approved by at least 61 MKs.
The opposition might play along, since it would presumably want to topple the right, but there are signs that it too would not want to see another election in 2019.
If the bill passes, Israelis will head to the polls within 90 days to elect the 22nd Knesset.
Originally published at JNS.org - reposted with permission.