When GMO Children Have Children 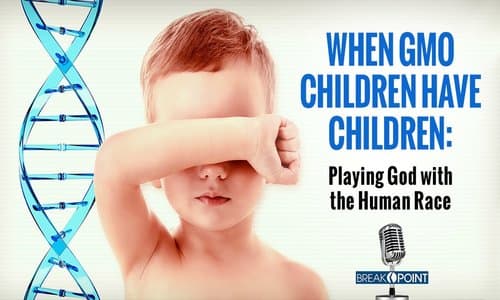 By John Stonestreet/Breakpoint.org May 28, 2019
Share this article:
Orson Scott Card's science fiction novel, "Ender's Shadow" is a favorite of some of our staff. In it, a twelve-year-old's medical condition gives him superhuman brilliance. Only after helping mankind win the war against an insectoid alien invader does Julian Delphiki discover he's the product of a genetic experiment that unlocked the full potential of the human brain.
Julian's potential comes at a high cost. He will outgrow his heart and die before the age of twenty. The mad scientist who engineered him is driven to make even more like him, eventually replacing the human race with a new and--in his mind--superior species.

Just last year, headlines announced the birth of the world's first genetically modified children in China. The gene editing technology known as CRISPR has made it possible to tinker with the genetic design of human beings. And so, the world met Dr. He, the first mad scientist to don his lab coat in real life.
In response, many have warned that the time for preventative action is now. Writing in "Nature," a group of leading bioscience researchers recently called for a global moratorium on the gene-editing of human embryos. "The introduction of genetic modifications into future generations," they write, "could have permanent and possibly harmful effects on the species.
These mutations cannot be removed from the gene pool unless all carriers agree to forego having children, or to use genetic procedures to ensure that they do not transmit the mutation to their children."
In other words, GMO people, like GMO plants and animals, can pass on their artificial traits, not only making genetic experiments a permanent part of the human genome but also potentially affecting an untold number of lives.

In other words, when we genetically alter children, we not only play God with them. We are experimenting on their children and their children's children. Even if the result isn't some nightmare mutation like Julian Delphiki's drastically shortened lifespan, (which he does pass on to his children in the story, by the way), modified embryos cannot give their consent to our experimentation. They must simply live with the traits and the consequences, beneficial or not, imposed on them by mad scientists.
Despite the warnings, others have glibly declared we have nothing to fear from this new technology. Objections to human genetic engineering, scoffs Ronald Bailey at "Reason," are "ethically nonsensical." After basic health screenings, he writes, "gene-edited kids can be released into the wild human gene pool with no special worries about how they might effect future generations."
His reasoning behind this, unbelievably, is that mutations happen naturally all the time, and we don't panic about those. What he misses in this proclamation is an essential aspect of bioethics: intent. The fact that people die naturally doesn't mean killing is okay.

The fact that people have disabilities doesn't mean we should intentionally disable people. In fact, natural genetic mutations perfectly illustrate how small changes in DNA can be devastating, and will be passed from generation to generation. Just ask those who suffer from hemophilia, or Tay-Sachs or Huntington's disease.
If there is a legitimate use for gene-editing, it's in healing, not enhancing. But of course, even that has to be done with the greatest caution, and only by geneticists fully aware that even our best laid plans often fail, and in this case, the consequences will last for generations.
Still, our concerns must be more than pragmatic. Other reproductive technologies have already been used to experiment on children without their consent, and many of these folks are now speaking up with concerns we promised ourselves they would never have.
Reproductive ethics must fundamentally recognize that we don't own our children. We have no right to remake them. Whether or not the future of gene-editing will look anything like the movies, the idea of engineering the next generation to suit our preferences is definitely the definition of mad science.
Originally published at Breakpoint.org - reposted with permission.