Some Women Are More Equal Than Others: Voices The Tolerant Won't Tolerate 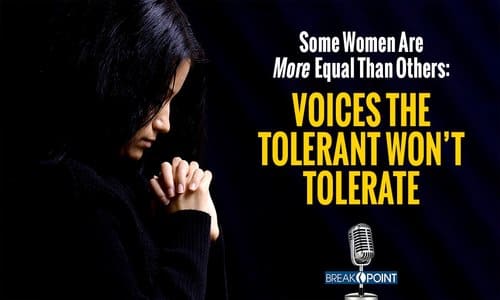 By John Stonestreet/Breakpoint.org June 03, 2019
Share this article:
One of the most important developments in American culture over the last few years has been the elevation of women. Especially since the #MeToo movement inspired victims to come forward, we've become serious about ending the harassment and silencing of women.
But there are still women being silenced. And there are still women being harassed. Ironically, though many progressives have claimed credit for this new state of wokeness, they're the ones often telling a very specific group of women to essentially "sit down and shut up."

Take Pennsylvania state representative Brian Sims, who twice filmed himself harassing peaceful pro-life protesters outside a Philadelphia abortion clinic. In the first encounter, this grown man descended on a group of teenage girls, offering $100 to anyone who could identify them. That's what is called "doxing," by the way, and it's a very effective online intimidation tactic.
Later, Simms posted a video in which he harassed a woman that was praying in front of the same clinic, calling her "disgusting" and "racist," and asking viewers to identify her and publish her home address.
But Simms is not the only one who is on a quest to intimidate and silence pro-life women.
Earlier this month, a woman protesting in front of another abortion clinic--this time in Huntsville, Alabama--was assaulted by an abortion supporter who jumped out of her car, punched her, and took her phone. That protester, Mary Baggett, caught the incident on video. And she's just the latest victim in what's become an increasing pattern of harassment and assault against pro-lifers, oftentimes pro-life women.

Abortion isn't the only issue on which the tolerant can't seem to tolerate any dissent. In the push to allow biologically male, transgender athletes to compete alongside females, women who don't like the idea of permanently coming in second or third aren't allowed to speak, either.
The Daily Signal recently interviewed Selina Soule, a high school junior competing in Connecticut's Girls' Track and Field State Championships. Selina didn't make the cut for New England last year--not because any other girls ran better times, but because two boys who identified as girls took first and second place.
Obviously discouraged, Soule told the Signal, "When I'm at the start of the race--when I'm lining up and getting into my blocks--everyone already knows the outcome...there's no way that one of us biological girls will be able to outrun those transgender athletes." But no one seems willing to challenge this new arrangement.
Her mom explained why: "...girl athletes competing every week live in fear to speak out due to the possibility of retaliation from coaches, from school officials, as well as hurting their college scholarship opportunities."
At a recent event hosted by the Heritage Foundation, one female weightlifter recounted how transgender activists disrupted her competition for ninety minutes after she dared to speak out. She's even received death threats for, in her words, "trying to save women's sports."
Many progressives are more than willing to listen to women's voices--as long as they don't say anything contrary to left-wing ideology. But calling yourself pro-woman makes no sense when the only women you listen to are those who repeat your own opinions.

There are a couple of lessons to draw from this. First, don't believe the rhetoric that says one side in today's social debates is for women and the other against. Anyone who has ever walked into a pro-life pregnancy care center, or attended the annual March for Life in Washington, D.C. knows what kind of propaganda and nonsense that is. These movements are led and propelled by women.
Second, empowering women and amplifying their voices must include those championing truly hard and unpopular causes--like those resisting the destruction of women's spaces and women's sports by transgender ideology.
It's all well and good to call yourself, your organization, or your political party "pro-women," but not if you harass, intimidate, and silence any woman who dares to go off script.
Originally published at Breakpoint.org - reposted with permission.