The Religious/Secular Divide For Control Of Israeli Society 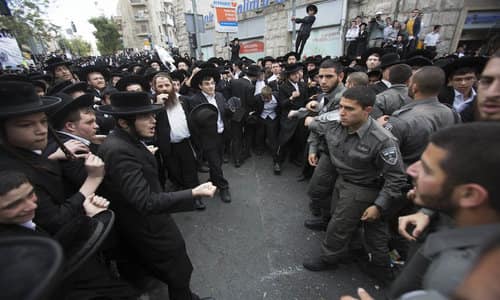 By Jonathan Tobin/JNS.org June 10, 2019
Share this article:
In an interview with The New York Times published this week, new Palestinian Authority Prime Minister Muhammad Shtayyeh warned Israel that it might experience "a very hot summer."
The point of this statement was not about another heat wave coming to scorch the Middle East, but the possibility that the leaders of the P.A. were considering trying to influence Israel and the United States to alter their policies by threatening unrest and violence.
That's the last thing the Palestinians need from their West Bank government. But since neither America nor Israel will budge from their justified insistence that the P.A. stop subsidizing terror in the form of salaries and pensions granted to imprisoned or deceased terrorists and their families, there is a real possibility of a confrontation in the territories, where things could definitely get hot.

If that's the way it plays out, then that's also bad news for those Israeli politicians who are betting their political lives that conflict with the Palestinians is about to drop off the radar screen of the voting public.
That was, in essence, the conceit of Avigdor Lieberman's reasoning when he refused to join Prime Minister Benjamin Netanyahu's coalition. Lieberman's insistence that Netanyahu force the ultra-Orthodox parties to accept a meaningless but symbolic law about drafting more religious men into the Israel Defense Forces had little to do with actually reducing the number of yeshivah students receiving exemptions.
Still, the result was that Israel is going to a second election in five months in September. Lieberman is hoping that he can successfully pose as the champion of secular Jews against the ultra-Orthodox and gain more Knesset seats for his Yisrael Beiteinu Party.
Lieberman says that he isn't opposed to a "right-wing government," but does oppose a halachic government or one in which the haredi parties would, as they have in many respects, imposed their will, as well as Jewish religious law, on the secular and traditional majority.
Lieberman isn't the only one making this bet.
The leaders of the Blue and White Party, which tied Likud for the most seats won in the April election yet lacked the support to form a majority, seem also to be interested in capitalizing on a situation in which Netanyahu is linked to the ultra-Orthodox.

The emphasis in the party's campaign would then shift from an effort to prove to the voters that it has the military credentials to govern in the form of a chorus line of former top IDF generals on their ticket, including leader Benny Gantz. Instead, it may move back to the secularism of Yair Lapid, whose Yesh Atid Party merged with the generals' factions in order to create Blue and White.
What they are hoping for isn't merely a momentary advantage, but a sea change in Israeli politics in which security issues will no longer be the priority for most voters.
Is that possible?
The story is told of Zionist leader Ze'ev Jabotinsky being asked by a supporter about whether his Revisionist movement--the forerunner of today's Likud Party--would oppose religious coercion by the Orthodox in the pre-state Jewish community in what is now Israel. Jabotinsky was secular but respectful of Judaism.
His response though was that the battle over such issues would have to wait until the Jewish state was created and then secured. "First, we must get a state," he is alleged to have said. "Then you can have a war with the rabbis."
Has that moment arrived?
The Jewish state is more secure than it has ever been. Israel is a regional military superpower and possessed of a prosperous First World "Startup Nation" economy. Much of the Arab world is eager for better relations with Israel and to use it as an ally against Iran. The Palestinians are still the prisoners of a mindset that causes them to refuse to accept the legitimacy of a Jewish state, no matter where its borders are drawn. But they are also more isolated than ever.

That's why Lieberman and Gantz think that the era in which the Israel politics is dominated by those who can point to the foolishness of the parties of the left in imposing the Oslo peace process on the country is over. The parties of the left--the once dominant Labor and Meretz--remain marginalized.
However, if Netanyahu calling Blue and White and even the heretofore very right-wing Lieberman "leftists" no longer resonates with voters who care more about putting the Orthodox in their place, then perhaps the Likud and Netanyahu's decade-long stranglehold on power really is about to end.
Lieberman and Gantz believe that the secular majority's resentment of the Orthodox--both in terms of dodging the military draft and the dead hand of religious coercion on society--will dominate the conversation, giving them the "war on the rabbis" that Jabotinsky predicted would follow once the state was secured against Arab foes by the "Iron Wall" he said must be built to defend it.
The problem with that formulation is that the Palestinians may not agree to simply look on quietly while Israelis sort out their domestic disputes. Instead, frustrated by their isolation and still besotted with an ideology of violence and committed to their fantasy of the Jewish state's destruction, they may strike out and remind Israelis that war and peace issues are still the most important ones.
Whether it is Hamas or Hezbollah rockets, or a new intifada aimed at derailing U.S. President Donald Trump's peace initiative, the Palestinians still have it within their power to focus Israelis on security. Their violence and rejectionism have won Netanyahu the last four straight elections, and there is good reason to think they could give him a fifth consecutive victory if Shtayyeh's prediction of a hot summer is correct.
If so, those anticipating the inevitable conflict between the religious and the secular for control of Israeli society will have to keep waiting.
Originally published at JNS.org - reposted with permission.