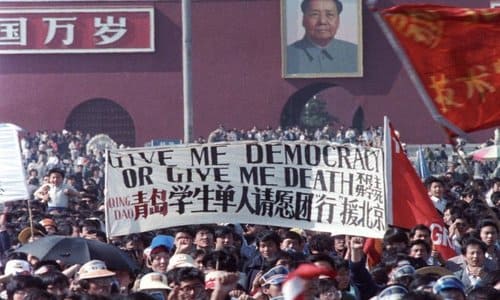 By Jonathon Van Maren/Bridgehead.ca June 13, 2019
Share this article:
Thirty years ago this week, late in the evening of June 3, 1989, tanks rumbled down the streets of Beijing towards Tiananmen Square, where for weeks a sea of students had gathered to demand government reforms and moves towards democracy.
As people realized that the thousands of soldiers were headed for the Square, they swarmed into the streets to block their progress, throwing up barricades at major intersections, flashing the V-for-victory signal, and at about 10:30 PM, near the Muxidi apartment buildings where some of the high-level Communist Party officials lived, they began to shout at the soldiers.
A few rocks were thrown. And then, the soldiers swung the barrels of their AK-47s towards the crowds and opened fire on the unarmed citizens. June 4 would be the day of what would become known as the Tiananmen Square Massacre, but the first blood was drawn a few hours before.

When the tanks and the soldiers arrived at the Square, student leaders made the hurried to decision to evacuate. Most left. Some stayed. Later that morning, more people tried to enter the Square, probably the parents of students. The soldiers started firing, mowing down everyone they could see and shooting those who fled in the back.
Rescue workers who tried to get to the wounded were gunned down, too. Eyewitnesses would later say that the soldiers seemed almost frenzied, raking the Square with bullets, killing anyone they could see. The Chinese Red Cross initially reported 2,600 dead, but hastily retracted that number under pressure from the Communist government, which has since provided the ludicrous but official death count of 241, including soldiers, with an additional 7,000 wounded.
When you walk though Tiananmen Square today, as I did several years ago, it is almost impossible to fathom the carnage that took place there. The Chinese government does its best to make this so, with information about the massacres suppressed throughout China and dissidents even sent on forced "vacations" for the 30th anniversary of the bloodshed to ensure that the events did not receive public attention.
To this day, the Communist Party insists that the student protests were "political turbulence" that had to be crushed by any means necessary to ensure the decades of economic prosperity that would come in the years ahead.
This should not be surprising, as Mao Zedong, the dictator who was predeceased by 65 million of his Chinese victims, still lies in state in a glass coffin in his mausoleum in the Square, worshipped by visitors who seem willing to accept the fact that oceans of blood needed to be spilt for Red China to rise from the ashes of her murdered people.

As World Magazine reported this week, many of the leaders of the Chinese student democracy movement eventually became Christians and fled to the West. Several days ago I spoke to one Chinese Christian who now lives in Edmonton. Michelle Chen had been a twenty-year-old student thirty years ago, attending the largest university in the city of Xi'an, where protests had been going on for 40 or 50 days by June 4.
Protestors had been connecting by mail and by radio, especially Voice of America, which was illegal to listen to and thus considered an accurate source of information. Student democracy leaders also communicated with protestors around the country this way. Messages were put on posters and hung up around the campus--in those days, Chen remembers, the government did not exercise the same level of tight control.
As Chen remembers it, many officials even intentionally turned a blind eye to student activities at first. After all, posters with slogans were common--not only political slogans, but all sorts of subjects were addressed. It was the posters, Chen says, that fueled the protesting. Students and instructors had to pass the bulletin boards on their way across campus, and so they triggered much discussion.
Students began sending out their own radio broadcasts. Chen herself was simply one of the thousands of student protestors--she chuckles as says that, noting that she was too interested in dating her boyfriend at the time to take a leadership role.
The students in Xi'an followed the orders of the leaders in Beijing, including student strikes and not showing up for class. Then, she recalls, things seemed to die down for awhile at the end of May, and people thought things were quieting. But all of a sudden in early June, things started up again, "and the conflict became more intense."
On June 2 or 3, Chen says, there was a campaign to empty the university. Everyone was urged to walk out and leave. Officials tried to end the student strike and force everyone back to class, and so the students dispersed, going anywhere they could to avoid going back to university. Chen says she spoke with someone recently who was also a protestor in Xi'an but at a different university who recalls receiving the same orders, and they both believe the orders came from Beijing.
Chen left the city to head back to her hometown, and she had not even arrived yet when she heard the news of the massacre at Tiananmen Square. "I was so shocked. I think everyone was," she recalls. The students, in their idealism, had somehow thought that the Communist government would not stoop so low. Everyone knew that the conflict was escalating, she says, and nobody knew how it would end, but nobody thought it would end that way.
The calls for transparency, freedom of speech, and democracy, were abruptly over. Student leaders were arrested and sent to prison or were smuggled out of the country. Chen's boyfriend had one friend who suffered extremely severe consequences, and another friend a few years older than her was kicked out of university.
The Party would ensure these young leaders had a very difficult life in the years ahead. Students like herself who had simply participated in the protest movement were required to write a full report after returning to university following summer break, detailing exactly what they had done and where they had been for the previous fifty days.

Most of the professors and teachers implied very strongly that the students should simply lie. "Lie, lie about everything you did to escape punishment. So that's what I did and most people did," Chen remembers. For the leaders, of course, their public profiles made deceit futile.
Even the university was stunned by the government killings, and did what they could to protect the students, some of whom were permanently scarred by what they'd seen. Chen remembers one high school classmate from her hometown who had been traumatized by something that had happened during the protests. She and her friends tried to visit him, but "he didn't say anything. He looked like he had already died. He was so pale, and he didn't say even a word."
About six months later, they finally discovered why: He was from Chengdu, and he joined his best friend in the student protests. Fleeing from the authorities after one event, his friend fell behind. When her high school classmate returned to search for his best friend, he found only the young man's battered corpse.
The soldiers had beaten him to death and left him there, and the sight of his dead friend rendered him a wreck. Eventually, the man's father had to come and pick him up from university, as he was simply too broken to continue.
The most horrifying killings may have occurred in Beijing, but smaller-scale tragedies played out around the country. "I still remember that feeling after we heard about the massacre," Chen says. "I think the whole country was too shocked even to move. One word: Hopeless. Desperately hopeless. Our hope died in that government's hands. Then I knew that all the government cared about was their power. They're not even going to blink an eye to kill anyone to protect their power."
They had pretended for so long to be a government of the people, and "so many of us, most of us, were so naïve and believed them." On June 4, 1986, the illusions of those who wanted China to change for the better were shattered forever. If the Communist Party was willing to butcher the best and the brightest on the streets and in broad daylight to maintain their grip on power, there was nothing they would not be willing to do.
"We didn't have bad intentions," Chen remembers. "We just wanted the country to get better. We had twenty golden years, from the 70's to the mid-80's. China was opening the door, and there were more opportunities. Finally we had hope. But we knew after the massacre that it was useless and that they would never, ever give up power." The naivete that died on the streets with the students, she says, seems to have been transferred to the West.
The West opened up to China in the years that following, believing that if prosperity and a strong middle class came to the Communist country, the Chinese people would demand a change from their authorities. That has not happened. Instead, the Communist Party has become more powerful, and China has become a rival superpower.
Dissenters are still crushed, with over a million Muslims languishing in concentration camps, a widespread crackdown on Christians, forced abortions as enforced policy, and total government control of information.
The Communist Party that ruthlessly murdered thousands of Chinese students thirty years ago this week are still in power, and they are in control of a country that poses one of the greatest geopolitical challenges to the West.
This anniversary is not so much a reflection on a historical event but a recognition that the totalitarian regime that crushed the protesters is still in place, and that they have grown infinitely more powerful in the years that followed.
Originally published at The Bridgehead - reposted with permission.