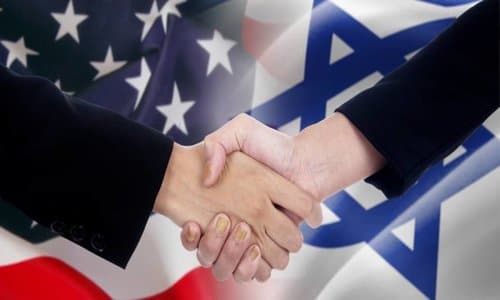 By Breaking Israel News June 14, 2019
Share this article:
In early 2019, author David Rubin left Israel for his original home country, the United States of America, on a mission to showcase his new book, Trump and the Jews, which explores the complexities of US President Donald Trump and his relationship with the Jewish people and Israel.
Promoting the book that seeks to answer the question of whether President Trump's presidency "is good for the Jews," while on the road, Rubin spoke at churches across the United States about the connections between Biblical and modern Israel.

His tour brought him to California, Montana, South Carolina and New York, where he also participated in various television talk shows about his book, which has garnered high ratings and reviews on Amazon.
Rubin recently spoke with Lou Dobbs on Fox News about anti-Semitism in the Democratic Party as well as border closures in Israel, and again on Fox's Varney & Co about Trump's border shutdown threat.
According to Rubin, on his tour, the churches receiving him responded "very positively" about his message, namely, Israel and the US's intertwined mission and values.
"The American church communities that I visited loved my message about how Israel and the United States have a parallel mission that is connected in some very interesting ways," Rubin told Breaking Israel News. He explained, "the nation of Israel received the Ten commandments on Mount Sinai and witnessed God's existence and participation in the world. Since then, the Jewish people understood their mission as  a light unto the nations."
Meanwhile, the role of the US, Rubin posed, "is to play a supporting role in that as a nation founded with Judeo-Christian principles."
Together, said Rubin, the United States and Israel can "further God's purposes in the world. From his perspective, the two countries are tasked to join together to create a better world with the Bible as the "blueprint" that teaches how to do just that.
"Every step we take that makes the world a better place furthers God's purposes," said Rubin.

Rubin's nuanced yet largely positive assessment of what President Trump has done for Israel, he said, was a breath of fresh air for the Evangelical communities he visited that are more often than not Trump supporters and "often hear from American Jews a more negative appraisal of the President and what he's been doing."
According to Rubin, one of the tour's main goals - other to promote his book - was to equip non-Jews with information in the context of what Rubin views as an "onslaught of misinformation" about Israel within the United States.
Despite wanting to defend Israel, he said, "sometimes pro-Israel Americans don't know how to respond with real facts when confronted with the very aggressive anti-Israel, anti-Jewish approach of the Ilhan Omar, Rashida Tlaib and Alexandria Ocasio-Cortez types in American leadership."
Rubin, therefore, focused his visits on the historical US-Israel relationship from the founding fathers of America to today's exceptional era of the US-Israel relationship under President Trump.
He offered historical information grounded in facts, both from ancient and recent history - from Biblical Israel to the modern land of Israel and current events - as well as "anything else that helped them to respond to the Israel haters in the world."
In addition to providing a useful historical context to Christian Americans who seek to understand and advocate for Israel more effectively, Rubin introduced them to practical ways that they may be able to support Israel from afar.
"I also speak to them about the Shiloh Israel Children's Fund, which works on behalf of terror victims' children," he said. "It's very important that they have the opportunity to partner with Israel in concrete ways, in this case, offering a connection to therapeutically-oriented projects for terror victims in the biblical heartland of Israel."
Rubin also often shares his own moving, personal story with groups as an anecdote to this project - he was a terror victim himself.
Rubin writes in Trump and the Jews, "My three-year-old son and I were victims of one such Fatah (Palestinian Authority sponsored) terror attack at the end of 2001, when we were shot and wounded while driving home from Jerusalem. I was shot in the leg and my son was shot in the head by terrorists armed with AK-47 assault rifles. The bullet that crashed into my son's head and through his neck missed his brain stem by just one millimeter, and he survived."
Giving information as well as personal anecdotes and concrete ways to strengthen the Christian communities' relationship and partnership with Israel and the Jewish people, posed Rubin, will ultimately strengthen the US-Israel relationship in new and compelling ways.
David Rubin's book is available from Amazon here.