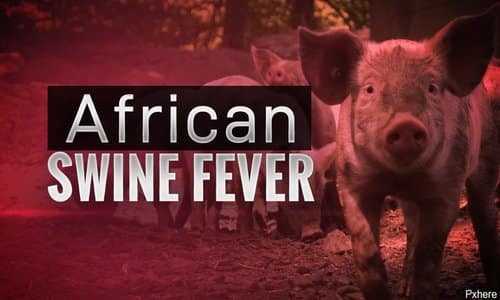 By Michael Snyder/Economic Collapse Blog June 14, 2019
Share this article:
We have never seen an animal disease outbreak like this before, and it is rapidly getting worse.  African Swine Fever, also referred to as "pig Ebola", has already wiped out millions upon millions of pigs and it continues to spread to even more countries.
There is no vaccine and there is no cure, and so essentially we don't have any way to stop this disease.
At this point, the only solution is to kill all the pigs wherever the virus is found and desperately hope that it doesn't spread anywhere else.  But that approach clearly hasn't been working, and according to a recent Fox News report this epidemic has now become the "biggest animal disease outbreak we've ever had on the planet"...
"This is the biggest animal disease outbreak we've ever had on the planet," Dirk Pfeiffer, a veterinary epidemiologist at City University of Hong Kong and swine fever expert, said. "It makes the foot and mouth disease and [mad cow disease] outbreaks pale in comparison to the damage that is being done. And we have no way to stop it from spreading."
China is the epicenter for this outbreak, and it is also home to half of all the pigs in the world.

Actually, to be more accurate, I should say that it used to be home to half of all the pigs in the world.
In a normal year, China slaughters approximately 700 million pigs.  But according to Rabobank, that number will be down 30 percent this year due to this outbreak...
Researchers at Rabobank are estimating that this year China will suffer a 30% loss in pork production as a result of ASF. To put that into perspective, that 30% loss in production is equivalent to Europe's entire annual pork supply, and almost 30% larger than U.S. annual pork production.
So let's do some quick math.
30 percent of 700 million is 210 million.
Let that sink in for a moment.  210 million pigs will be lost in China alone in 2019, and when you throw in the rest of the world we are talking about cataclysmic losses already and the outbreak is still getting worse.
One of the primary reasons why this virus is so fearsome is because it survives just about anywhere and it is incredibly hard to kill...
The germ is hardy, capable of remaining active in water for a month, in meat and blood at room temperature for several months and for six years in cold, dark conditions. It's resistant to temperature extremes, and can survive a day in vinegar-strength acids.
Even if we had an effective treatment, attempting to eradicate this disease would be a complete and utter nightmare.

But as I stated earlier, there is no vaccine and there is no cure.
All we can do is keep killing pigs.
But of course global demand for pork just continues to grow as the global population increases.
So with increasing demand and rapidly falling supply, it was inevitable that pork prices would begin to rise substantially...
The implications of the outbreak are already being felt beyond Asia. Global pork prices have risen by almost 40%, and long term it is likely to lead to more pork imports from Europe and America to meet demand, which will also push up global meat prices.
And what we have seen so far is just the beginning.  In fact, China's Ministry of Agriculture and Rural Affairs is now telling us that the price of pork is likely to rise 70 percent by the end of 2019.
Of course if this disease continues to spread, we could be talking about an epidemic that could literally end the global pork industry as we know it today.
Already, there is a tremendous amount of paranoia about the spread of this virus, and for good reason.  In fact, the virus has been found "in Chinese pork products that were confiscated by customs officials in Japan, South Korea and Australia"...
But the virus has been in Chinese pork products that were confiscated by customs officials in Japan, South Korea and Australia, suggesting that the virus has permeated the food chain in China.
And could it be possible that pork products tainted with the disease were able to slip through the inspection process in various countries?
We don't know.
But what we do know is that African Swine Fever has been spreading all over Asia.

It has now spread to Mongolia, Cambodia, Hong Kong, North Korea and Vietnam.  In fact, it is now being projected that Vietnam will lose 10% of its pork production this year...
Rabobank is projecting that Vietnam, which in May mobilized its military in the fight against the disease, will lose 10% of its pork production.
Today, pork accounts for three-quarters of all meat consumption in the nation of Vietnam.  This disease is already a major national crisis in that country, and we are still in the very early stages of this outbreak.
Meanwhile, this virus is starting to pop up in Europe as well.  According to one report, the disease was just identified at a major pig farm in Poland...
A farm with more than 8,000 pigs in Poland has broke with African swine fever. According to the World Organization for Animal Health, the farm is located in Bielsk Podlaskie near the border with Belarus.
And in Denmark, they have actually constructed a 43-mile border fence in order to keep out wild boar.
It is a good thing that they are taking this threat so seriously, because African Swine Fever is incredibly deadly.  Up to 90 percent of the pigs that catch the virus end up dead, and once it starts spreading on a pig farm it is inevitable that all of the survivors will have to be killed as well in order to help prevent the spread of the disease.
Unfortunately, most people in the western world still don't seem to understand the seriousness of what we are facing.  Essentially, what we are dealing with is an existential threat to the entire global pork industry.
And considering the fact that we really struggle to produce enough food for the entire planet in a good year, this should be a major wake up call for all of us.
Last week I spent about 200 dollars on groceries, and my shopping cart wasn't even full.  The price of food is already ridiculously high, but it looks like things are going to get much worse in the months ahead.