Ocasio-Cortez's Deep Misunderstanding Of The Holocaust 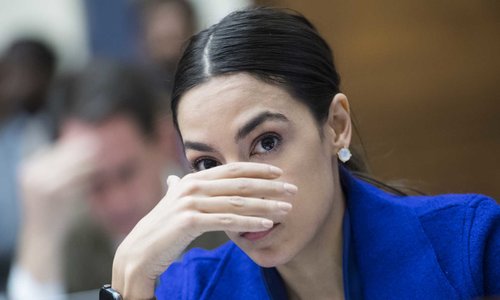 By Elad Hakim/Algemeiner.com June 20, 2019
Share this article:
Representative Alexandria Ocasio-Cortez (D-NY) recently told her Instagram followers that the United States is "running concentration camps" on the southern border. Aside from the insensitive nature of this statement, it also reflects a deep misunderstanding and ignorance of the Holocaust and what occurred in the concentration camps.
According to an article in Mother Jones, Ocasio-Cortez stated:
That is exactly what they are: They are concentration camps. I want to talk to the people that are concerned enough with humanity to say that "never again" means something.

I don't use those words lightly. I don't use those words to just throw bombs. I use that word because that is what an administration that creates concentration camps is. A presidency that creates concentration camps is fascist, and it's very difficult to say that because it is very difficult to accept the fact that that's how bad things happen.
Ocasio-Cortez believes that her "concentration camp" analogy is appropriate, due to what she describes as the use of "mass camps of people detained without a trial" and "DHS's mass separation of thousands of children at the border from their parents."
Fortunately for Ocasio-Cortez, she was not alive during the Holocaust nor was she forced to endure life in the "camps." However, Primo Levi, a Jewish-Italian Auschwitz survivor and literary documentarian, did. Primo wrote an essay "The Gray Zone," which was included in his final book, The Drowned and the Saved. In this essay, Primo described the brutality of Nazi Germany and life in the camps.
According to Vox, at one point in his essay, Primo described what took place when people first entered the concentration camps: "Kicks and punches right away, often in the face; an orgy of orders screamed with true and simulated rage; complete nakedness after being stripped; the shaving off of all one's hair; the outfitting in rags."
In another section of his essay, Primo described how the prisoners, some of whom were designated as the "Special Squad," were degraded and humiliated in the camps.
As set forth in Vox: "With the duly vague definition, 'Special Squad,' the SS referred to the group of prisoners entrusted with running the crematoria. It was their task to maintain order among the new arrivals (often completely unaware of the destiny awaiting them) who were to be sent into the gas chambers, to extract the corpses from the chambers, to pull gold teeth from jaws, to cut women's hair, to sort and classify clothes, shoes, and the content of the luggage, to transport the bodies to the crematoria and oversee the operation of the ovens, to extract and eliminate the ashes. The Special Squad in Auschwitz numbered, depending on the moment, from seven hundred to one thousand active members."

These Special Squads did not escape everyone else's fate. On the contrary, the SS exerted the greatest diligence to prevent any man who had been part of it from surviving and telling. Twelve squads succeeded each other for a few months, whereupon it was suppressed, each time with a different trick to head off possible resistance. As its initiation, the next squad burnt the corpses of its predecessors.
Primo was not the only survivor. Elie Wiesel, who also survived the Holocaust and subsequently became a journalist, described his experience in the camps. In his book Night, Wiesel described having to wear a yellow star, which the Nazis forced the Jews to wear so as to easily identify who would be sent to the concentration camps.
According to an article in ThoughtCo., when men, women, and children entered the camps, they were usually segregated. Those in the left line were usually forced into slave labor and terrible conditions, but temporary survival. On the other hand, those in the right line were taken to the gas chamber and immediately killed.
The following quote from Wiesel's book portrays the pain and dread of those living in the concentration camps: "Do you see that chimney over there? See it? Do you see those flames? (Yes, we did see the flames.) Over there -- that's where you're going to be taken. That's your grave, over there."
With this backdrop, there is no conceivable or logical way to rationalize Ocasio-Cortez's analogy. Our nation's immigration laws and border policies are meant to keep people from entering the country illegally. They are meant to prevent caravans of illegal migrants from entering the country through our porous borders. The immigration laws are meant to protect the citizens of the United States and those who are in the country legally.

Contrary to Ocasio-Cortez's claims, there is a major distinction between the detention centers along the United States border, which are intended to house people who have entered the country illegally, and the concentration camps in Nazi Germany, the primary purpose of which was to eradicate innocent human beings, including the Jewish people. While the conditions in the detention centers along the nation's border are not ideal, there are no gas chambers, incinerators, or burning bodies.
As Wiesel stated, "The flames rose 24 hours a day from the incinerators -- after the Jews were killed in the gas chambers by Zyklon B, their bodies were immediately taken to incinerators to be burned into black, charred dust."
There are no similarities between the detention centers and/or the act of detaining individuals who enter the country illegally and the concentration camps (death camps) of Nazi Germany. Ocasio-Cortez's comments were insensitive, offensive, and reflected a deep and profound misunderstanding of the Holocaust.
Republicans and Democrats should stand hand in hand on this matter, and demand that such comments be retracted. Some issues transcend politics. The Holocaust is one of them, and such comments should be rejected by everyone.
Originally published at Algemeiner.com - reposted with permission.